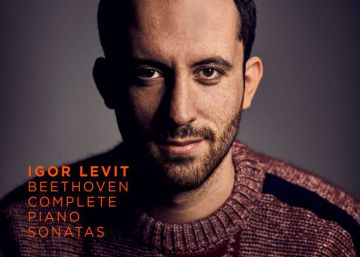 Ludwig van Beethoven was the composer chosen by Igor Levit for his first commercial recording: he was only 25 years old when he recorded in Berlin in 2013 his last five sonatas, reissued at the end of the integral now published almost in the manner of a "We said yesterday ...": six years is an immensity in a pianist of your age. I was even younger than Daniel Barenboim when he recorded these same works for the first of his integrals in audio and video, in studio and live (except for the 32nd sonata, which the Argentine took to the album in 1966 with 24 years old). Like him, Levit, another prodigious musician, is not satisfied with having recorded them: he played all the sonatas for the first time in the Tonhalle of Düsseldorf in the 2015-2016 season and in his next calendar there are new integrals in Hamburg, Lucerne and Stockholm.

Beethoven's 32 piano sonatas constitute an intimate, precise and detailed diary of his entire creative career, from the first three dedicated to Haydn, almost a presentation card of his talent, to the visionary language of the latter. To cover them in their entirety is to travel a rainbow almost inapprehensible to the eye. Since the historical cycles of Artur Schnabel or Wilhelm Backhaus, there have been very few pianists who have crowned the 32 peaks. In a selective list, which is not exhaustive: Wilhelm Kempff, Friedrich Gulda - both times - Claudio Arrau, Alfred Brendel, Maurizio Pollini, Richard Goode, András Schiff, Paul Lewis or the aforementioned Daniel Barenboim. For others, such as Solomon or Emil Gilels, death or illness prevented them from completing the deed. Levit confesses his predilection for Schnabel - the pioneer - and the first Gulda, although his is an entirely personal approach.

His Beethoven calls attention to a pressing tone, almost violent at times, which fits very well with the composer's most disruptive movements, although Levit proves to be a master of unusual maturity and depth for his age is in slow movements , built in a single stroke and in which the internal tension does not decay a single moment: there are many examples, but listen to those of the sonatas numbers 4, 7, 10, 15, 26 and 29. We also guess it happy to dive into the intricate escaped passages (28, 29, 31 and 32) and in the series of variations, which he arrives with the baggage of having already recorded the Goldberg of Bach and the Diabelli Beethoven himself, a kind of summa conclusive of all his piano production. Levit has not only fingers, but also an extraordinary analytical ability to unravel the essence of each work.

Pianist with a very strong social and political conscience, little friend of the divism and the odor, the Igor Levit presented his recording on September 2 without any paraphernalia at the Willy Brandt Institute, just a few tens of meters from where a stretch of the infamous Berlin wall. He then spoke with Alan Rusbridger, former director of The Guardian, amateur pianist and author of Play it again, the chronicle of his personal odyssey to manage to touch the Ballad number 1 from Chopin. Levit confessed that these 32 works are “the most human instrumental music” he knows, and that same adjective is perhaps also the one that best defines his interpretation, with which it is very difficult not to empathize, since both the composer who created the music as the pianist who now gives him life seems strangely tangible and close as human beings. Levit, who admits that the Missa solemn Beethoven is his favorite musical work, he expressly referred to the sonata 'Hammerklavier' as "a strange tree in a huge forest", highlighting its radical modernity: "I can not think of any other piano work that, emotional, mental, physically or in any other way, I got so far. ” And that maximum degree of “intensity, complexity and fearlessness” that he attributes to him finds their correlation in the formidable and courageous interpretation of Russian.

The magazine of the Willy Brandt Institute in Berlin is titled Ton der Freiheit (Sound of freedom) and contains stories of many of his foreign students who, like Levit in his day when he left his native Russia, have found a new home in Germany and in Berlin. That title would have delighted Beethoven himself, who confessed in 1819 in a letter to Archduke Rodolfo that "in the world of art, as in the whole of the great creation, freedom, progress, are the only objective." And it also seems the maxim that has guided Levit during the gestation of his new record colossus. This young genius will occupy a chair in Hannover next Tuesday, where he trained. Blessed are his students, because he has so much to give and to teach.