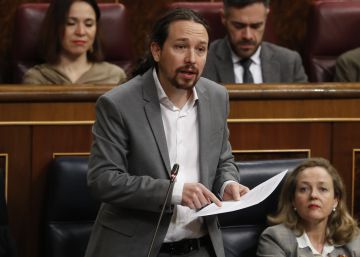 Pablo Iglesias He appears this Thursday for the first time as vice president in the Committee on Social Rights and Comprehensive Policies on Disability of the Congress of Deputies. He does so at his own request, to inform about the general lines of work in his department, with competence in dependency, family and childhood and the 2030 Agenda, among other matters. This legislature faces challenges such as reducing the dependency waiting list by 75%, to which PSOE and United Podemos committed in their government program, and Carry out the law on the protection of children and adolescents in the face of violence, something that, he said Monday in an interview in La Sexta, he hopes to achieve “more in a few weeks than in a few months.”

During his speech on Wednesday at the government control session, Iglesias already talked about the policies of his department. Especially from poverty. He asked questions of the general secretary of the PP, Teodoro García Egea. Iglesias read part of the preliminary report that the UN special rapporteur on extreme poverty and human rights on Spain, in which he warns of high rates of social exclusion and argues that poverty is a political option.

In his appearance this Thursday he will explain that his vice presidency will be responsible for leading the sustainable development strategy of the Coalition Government, based on three axes: social, environmental and economic. The vice-presidency aims to achieve a “great country agreement to actively and realistically promote” the 2030 agenda. An agreement that is “as broad as possible, that has civil society and all the actors with whom they can build great strategic policies ”.

Close bank accounts without going to the bank, is it possible?

From Lanzarote to Milan for Drome