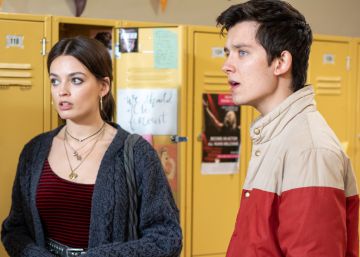 I wanted Laurie Nunn, the very talented creator of Sex education (Netflix), Harden the message, delve into the small chasms of the characters, on their return to the Moordale Institute. I wanted to overcome the condition of curious, funny and more or less uncomfortable – especially for the main character – of the inventory of sexual anecdotes that served as an engine of the classic disagreement between the tough girl, Maeve (Emma Mackey), and the loser Otis (Asa Butterfield). I wanted to turn a perfect fiction artifact, a perfect dramedy High school – really, the first installment seemed hard to beat – in something much deeper and more painful. Painting the outline, and dealing with how many traps puts adolescence in your way – and not only adolescence – extending your didactic intention to everything that surrounds sex in the institute, that is, life, that battlefield.

And have you achieved it? Yes, definitely. Till the date, Sex education it was, and is, a capital achievement, the series of institute that has best represented the very idea of ​​the institute, a place of discovery in which nothing is fixed, in which everything is still, as in the lives of students, by do. Prejudices and roles are forming but they may not do so and may never do so. It was and is a series of first times. Never before in a high school fiction have, for example, unbuttoned so many girls ‘pants with the naturalness with which they get used to unbuttoning boys’ pants all the time in audiovisual fiction, so that the other gives him pleasure , nor had the search (and the encounter) of female pleasure – the scene of Lily and Ola’s joint masturbation – an excellent example – been shown so clearly – the great absentee in every series of teenagers produced so far.

Nor had the role of characters flowed the way they it does Nunn Let’s think about Grease, the classic that more or less bases the base of the comedy of institute, that which is tried to modify – in the best one of the cases – or to reproduce without remedy until infinity. The boy is always a tough but sensitive boy who will never stop being who he is for a girl. However, she has had to meet him to realize what he had inside, or, worse, he had to abandon the girl he was to become something else and, of course, conquer him. Everything is to be with me or against me, and there are no colors, no religions, no sexual diversity, everything is taken for granted because it cannot be otherwise. And from 90210 until Saved by the Bell, going through such commendable attempts to get away from the topic like Freaks & Geeksor Glee, nothing had ever come as far as Sex education.

And that is because the Moordale Institute is one more teenager, everything moves in it, nothing is still fixed, as nothing is still fixed in its students, or in any student of any institute in the world, even if fiction has been committed all this time in giving old roles to an always as new and fascinating and unpredictable character as the teenager. There is not a single topic in Sex education, or rather it is a meeting of all of them in positions so absolutely antagonistic that, at the same time that it invents a new form for the comedy of institute – the one that always should have existed, the one in which everything is possible -, dismantles all the old women in a tastable, and plastic – the endless colorful of the costumes, the composition of scenes, everything has, at times, look like a vignette – narrative festival.

We said that Nunn thought to go further in the drawing of the characters and their chasms and that he has succeeded. We add that, in doing so, he has offered doors with exit, a respected and positive exit, to some of the main problems of adolescents today and forever. Let’s look at two examples. The case of abuse on the bus of Aimee, whose consequences on the character, hitherto carefree, of the girl go practically all season, serves to understand how non-insignificant is any type of sexual situation not consented and the consequences it has on The character and life of the victim. And the pressure felt by Jackson Marchetti (Kedar Williams-Stirling), the star swimmer of the institute, the popular boy, who for the first time – and this is one of those first times of Nunn – is black and has two mothers and does not play rugby neither baseball nor run, is leading him to hurt himself to force a departure from the path that has to do with the silenced fear of disappointment of the good boy and that, as another character says, in a very high percentage can end in suicide .

There are no lessons in Sex education but possibilities. The possibility that your first boyfriend –Rahim, Eric’s boyfriend– respect everything he doesn’t understand from you from the first moment, or that you hate yourself but can’t help loving others – Adam’s case It is the darkest in that sense and, despite everything, there is light at the end of the tunnel. The one that you don’t let your little sister go through what you’ve been through even if you don’t know what exactly it will hold for her – Maeve also sinks into the hell of her heroin mother – or the one that you don’t understand why you’re alone when it’s you the one that you expel to the whole world from your side – the enormous Gillian Anderson gives here the chest, and all the edges of an enormously perfect character appear.

And then there is the didactic aspect, sexually speaking. No matter how old you are, with Sex educationyou learn And this is so, again, because it is not only aimed at a public spectrum but also takes into account the whole world, in an exercise of admirable and necessary empathy.