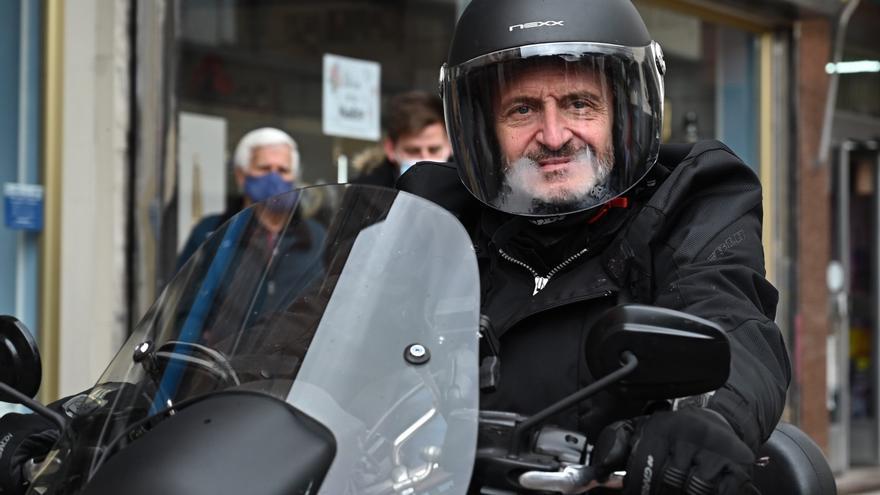 Like those endless vacations on the run where they have a few hours to see a city and you already have to run to the next one, the electoral campaigns end up accelerating as they approach their end, becoming a succession of interviews, rallies and meetings with groups. Candidates lose track of time and reality and are subjected to a suffocating agenda. The PSOE has put Gabilondo on a diet of two daily rallies. Like the others, he will arrive on May 4 with his tongue hanging out. Every minute counts.

The interview with Isabel Díaz Ayuso on TVE begins with a question about threats to politicians. The president does not give it more importance. Like the traffic jams in Madrid, they are annoyances that should not make anyone nervous. "There have always been threats," he says. "It is part of our job." If it is such an everyday thing and almost an inevitable part of the work of a politician, we will have to start thinking about removing this crime from the Penal Code.

On campaign promises are made that are actually gifts to voters. Edmundo Bal promises in Antena 3 to deliver free tablets to 671,000 Primary, Secondary and FP students to close the digital gap between students. To all. Without any consideration for your income level. Public funds so that families that can afford that payment have it free as well as those who do not have enough money. Bal also says that "you can have low taxes because wealth creation allows you to raise more." Laffer's napkin he never abandons the campaigns in Spain.

Pablo Iglesias decides to grant an interview to a Catalan media, RAC1, in the middle of the Madrid campaign. It refers to "longing for democracy" that supposed the independence process like the 15M. That is unlikely to win him votes in Madrid.

Díaz Ayuso presents the PP environment program. They ask him about the campaign: "The campaign is being a constant tragedy. It is being tremendously bad." It is quite clear that she has set the tone for this campaign, but the fault lies with the opposition, of course. Fundamentally, from Pablo Iglesias: "He was born from evil to do evil". The Antichrist, knocking at the gates of heaven.

Ángel Gabilondo defends his style in La Sexta: "I don't need to speak ill of anyone for them to speak of me." His problem is that he spoke very little and without any bite during 2020 as leader of the opposition in the Madrid Assembly. In the last week of the campaign, he has hardened his speech - "much of Vox's speech is internalized in Díaz Ayuso's message," he says in the interview - but it may already be too late.

Citizens live in their world. Not because the polls say so, which predict his political death in Madrid, but because he wants to recover a coalition government that was terminated by Díaz Ayuso when the elections were called. "The dilemma that opens this May 4 it is if we are going to reissue that moderate government, that successful government, or if Mrs. Ayuso is going to do an experiment with Vox, "says Inés Arrimadas at a press conference. Meanwhile, Ayuso does not see the moment when she can get rid of it. of Citizens.

Pablo Iglesias talks about the threat of fascism again. He does it at all rallies. "Fascism is the right wing when it realizes that it can lose power", affirms in Leganés. There is something wrong here, because the right wing does not seem to believe that the government is going to lose in Madrid and its message has strayed more than ever. The leader of United We Can continues with his attempt to explain to those attending the rallies that fascism has a new face and to assume that the far right will be in the future Ayuso government. Santiago Abascal has already promised his support and has not shown much interest in Vox being part of that Cabinet.

They ask Díaz Ayuso in an El Mundo forum about inequality in Madrid. He sneaks off saying that the issue of inequality is "very ambiguous." It refers to the fact that in a rich municipality like Pozuelo there are also people with little income. It is like saying that there is no inequality between territories if there are poor in all. "We have one of the highest vital income in Madrid," he says, which was already false before the arrival of the minimum vital income. In 2018, only 10.5% of Madrid who was below the poverty line received a minimum income. Madrid was in the middle of the Spanish ranking (Euskadi had 71.2% and Navarra 66.7%).

The Electoral Board of Madrid demands that Correos provide explanations on a complaint made by the PP on account of the vote by mail. The PP and Vox have echoed a hoax that circulates through networks and they have given it a letter of nature. When making a payment for a shipment at the counter, the ticket shows a reference - "votes cast: 0.0 euros" - which corresponds to a previous user's management to process their vote by mail, which is free. That is the way it is automatically reflected, as explained by the Post Office. If you believe the conspiracy, it would be possible that by sending a registered letter to a cousin of Zamora Correos he would have taken your ID to vote in your place, even if you were not from Madrid. A matter so credible that the PP has been interested in it because it is interested in the headline moving.

Citizens places a giant billboard in a building in Madrid. Some attacks launched in this campaign (bitter, parasite, rat ...) appear very large to maintain that they are "the vote of concord." What is striking is that the party leader, his candidate in Madrid and the deputy mayor present themselves to inaugurate it. A bit like when some municipalities inaugurate roundabouts.

Mónica García does not miss the comment made by Díaz Ayuso about the "ambiguous" inequality, especially the statement that those who have less in Madrid "live better than in other regions." The More Madrid candidate is scandalized: "Ayuso still wants to be thanked for being hungry or for not making ends meet," she replied. In Getafe, he offers a message of hope to his voters, because "everything will be decided by a handful of votes." Gabilondo said something similar in the morning: "We are at most 50,000 votes from each other". That would be around two seats and the truth is that they are more than a handful of votes.

At the end of the day, someone Diaz Ayuso would not like to see up close appears. Twenty health professionals participate in a video with which they ask Madrilenians to vote to defend public health. One of them is Yolanda Fuentes, who was the regional director of Public Health. Fuentes submitted his resignation in May 2020 in disagreement with Díaz Ayuso's demand that Madrid move to Phase 1 de-escalation as soon as possible after the first wave of the pandemic. She defines herself on Twitter as a "political orphan", but she has very clear ideas about an argument widely used by Ayuso in his rallies: "Understand that freedom is doing whatever you want In the midst of a pandemic, with the ucis over their capacity and with their teammates defeated, it seems to me, to say the least, immodest ".