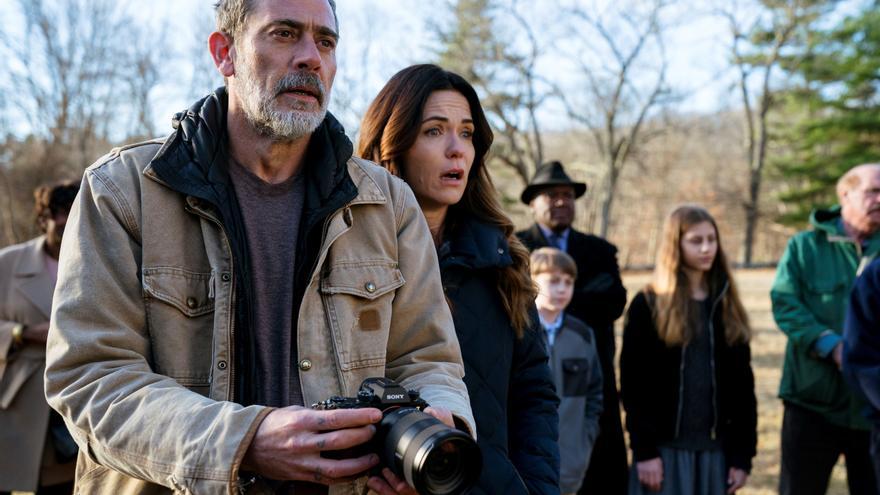 Los Angeles (USA), Apr 1 (EFE) .- Killing zombies in “The Walking Dead” or facing demonic appearances in “Pray for us”, Jeffrey Dean Morgan seems to enjoy the sinister characters, but in an interview with Efe he admitted that he would not mind trying less terrifying roles.

“If a great love story or romantic comedy had been proposed to me, I would have done it,” he joked.

With the end of “The Walking Dead” already on the horizon (the eleventh season will be the last), Jeffrey Dean Morgan (Seattle, USA, 1966) premieres tomorrow “Pray for us” (“The Unholy”), a wicked way to celebrate Easter with a tale of creepy demons, exorcisms in a forest, and virgins who are not what they seem.

In this film, Gerry Fenn (Jeffrey Dean Morgan) is a journalist in crisis who runs into Alice (Cricket Brown), a young woman with hearing problems.

However, after an alleged apparition of the Virgin Mary, Alice not only can hear perfectly, but also becomes a mysterious intermediary of new miracles.

Evan Spiliotopoulos signs his directorial debut with “Pray for us”, which comes with the blessing in the production of a horror myth like Sam Raimi (“Infernal Possession”, 1981).

Away from the tension of the tape, Jeffrey Dean Morgan appears on the video call with a joker and badass air: he wears a black jacket and sunglasses, enjoys a morning outdoors in the country and lights a cigarette during the conversation.

AN EXPERT OF THE SHADOWS

Question: We have seen you in very dark worlds. Zombies in “The Walking Dead”, horror now in “Pray for us” … Are you particularly comfortable with sinister stories?

Answer: I don’t know if I thought about it a lot when I got into (this movie), but I guess so, there is some comfort zone for me when I read this type of material.

There must be something about those stories that when I read them I think, “Oh yeah, this is in my field of expertise” (smiles). And I don’t know exactly how this came to be.

Not that he read “Pray for us” and thought “Oh, another dark character I can play”, but yeah, Gerry Fenn is a shit, he’s pretty screwed up as an individual when we meet him and obviously the subject of the movie quickly turns dark .

But I don’t know if I looked for it as such, it was not my intention. If someone had proposed me a great love story or a romantic comedy, I would have done it. It’s really about finding the best material and the best people to work with that I can, and also that fits into my breaks from “The Walking Dead.” All those things have to be given.

Q: Your character is a skeptical journalist and not at all believing. Why is he so obsessed with Alice’s so-called miracles?

A: I think you just get drawn into this story.

He is a total skeptic, but witnessing the miracle of the boy who walks again, that is when a new chapter begins about the things he believes in and what he does not believe. And he gets into it.

It seems to me that at first you think you can make a few extra bucks with this story. He is not a guy with many moral values: for him it is about putting gas in the car and getting to his next topic. He’s already screwed up his life too much.

But it’s interesting how this story somehow “resurrects” my character, who thus finds his moral compass again.

THE TEMPTATION OF THE UNEXPLAINED

Q: We live in a very technological and science-based society, but we are still very interested in the supernatural and the religious. Why are we so attracted to what we cannot explain with logic?

S: (sighs). It’s a great question. I don’t know, since I myself watch many documentaries about things like the apparitions of Fatima, UFOs … In my house we love this kind of thing without explanation (…) I believe in science, now more than ever .

But there is also a part of me that if you met my wife (actress Hilarie Burton), you would understand her better. She believes a lot in the supernatural, especially the good side of it, not the bad. She has raised our children with this kind of fascination about it. And I have let myself go.

I was never really a big believer in these things until I met Hilarie and she has clearly led me to have an open mind to the crazy, to the miracles, to the inexplicable … And I think this movie adds to that.

Something similar happened to me with “The Possession: The Origin of Evil” (2012). I went to make that movie thinking, “Come on, man, a box with a demon in it?” And I ended up saying, “Ok, you know what? That box could have a demon in it” (smiles).

Many of the stories that we have heard or read throughout our lives have a kind of religious anchor, which is the inexplicable. And that is very credible. I believe in Fatima and the three children, so it seems to me that having that (in “Pray for us”) as a starting point for a movie, something that could have happened, opens the door to terror.

That’s why I wanted to make this tape, because it could be real.

Tags: comedy, dean, done, Jeffrey, morgan, proposed, there would be, would have, yes