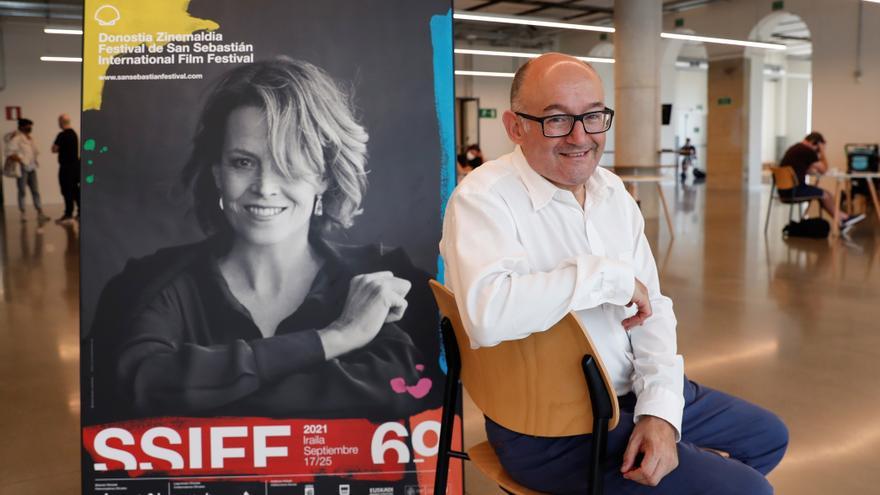 San Sebastián, Sep 12 (EFE) .- The director of the San Sebastián Film Festival, José Luis Rebordinos, is not willing to censor himself to avoid controversy. Of the one that arose from the Donostia Award to Johnny Depp, he has already said "everything he had to say" and does not want it to become the "axis" of the contest.

"I am already of an age and if I have to censor myself, I will leave. It would only be missing that I cannot work and express myself as I think I should," he says in an interview with EFE, in which he asks for "good sense" to address the equality debate of women in the film industry.

He reiterates that the American actor has not been charged or convicted of mistreatment and defends the presumption of innocence, although he considers "that Johnny Depp is still an anecdote" and that "conflicts must be converted into opportunities."

"You have to get women to join the industry normally because it is true that they are not. But let's stop with nonsense, that until the last monkey believes that they have the right to say what a festival or a production company should do", Rebordinos emphasizes, who wants to "remove" the debate from social networks.

Equality issues will be discussed in an internal conference organized by Zinemaldia together with the association of professional women in the audiovisual sector and the performing arts (H) emen as a result of this controversy, although a round table on the deletion of the genre in the award for best performance.

The Festival team was surprised by the reactions to this decision. "Berlin did it and, as far as I know, there was no special commotion. Then Mar de Plata did it and then the Huelva Festival, and I didn't read anything. first years the meaning of this award will be "perverted".

But he is convinced that in "four or five years" all the festivals will do it, because in the same way that there is no gender distinction in the awards to the best director or the best screenwriter, there should not be them in the interpretation.

"As soon as people lose their fear, everyone is going to do it," says the head of Zinemaldia, whose opposition to gender-based quotas is known.

He comments that, without applying this criterion, at the 69th edition of the San Sebastian Festival, which begins next Friday, there will be nine men and seven women competing for the Golden Shell, and among them, two directors -the Romanian Alina Grigore and the Danish Tea Lindeburg- with her early work.

He predicts that they are two filmmakers who are going to do "important things" in the future, like the Georgian Dea Kulumbegashvili, who will preside over the jury of this edition and who in 2020 won the Golden Shell with her debut film, "Beginning "plus three other awards, which no one had ever achieved before.

"We wanted to value young talent. Even if she has a feature film and several shorts, we believe she has the level to be president of the jury. That has been our bet and I have no doubt that she will be a great president," she asserts .

He says that this year in the Official Section there is "a good balance" between established and emerging names, and also with films that are among "the best" of the production of the best-known filmmakers.

He cites, among others, Zhang Yimou, who will open the contest with "Un Segundo", "one of his great films", and the four Spanish directors with titles in competition in the Official Section -Icíar Bollain, Fernando León de Aranoa, Paco Plaza and Jonás Trueba.

He assures that, after the shortage of Spanish films in 2020, the Festival now has "the most powerful program of Spanish cinema in the last ten years".

And although he acknowledges that the late Cannes celebration has harmed them, he emphasizes that what has been presented at the French competition has been so much and of such great quality, which has also happened with Venice, that they have "left over" films to make sections such as Perlak and Zabaltegi-Tabakalera.

The same does not happen with films from Latin America because, due to the pandemic, large productions "are stopped", although he emphasizes that among the small ones there are "really interesting" titles.

Zinemaldia will once again program series and films on audiovisual platforms, such as Netflix's "Distancia de salvage", with which the Peruvian Claudia Llosa aspires to the Golden Shell.

Rebordinos thinks that debates such as that of the cinema produced by digital platforms "were born to die very quickly", as he assures that this system is "perfectly compatible" with the big screen.

"You have to see how the traditional system fits with the other, how it is negotiated, so that we do not end up with theaters, which are essential to see the cinema in optimal conditions. On the other hand, at the moment a large part of the film industry it is getting ahead because the platforms need content and they produce, if not how many people would go unemployed. Let us be aware of the advantages, "he adds.

The San Sebastian Festival faces its second edition in pandemic in 2021 with anticovid measures similar to those of last year, although with a "tranquility" that they did not have then.

"The fear was that, suddenly, there were a couple of lights and people would die," says Rebordinos, aware that they moved in a "thin line" and that, if things had turned out differently, instead of congratulations they would I would have talked about irresponsibility.

Tags: censor me, flanges, I will go, José, lewis, yes