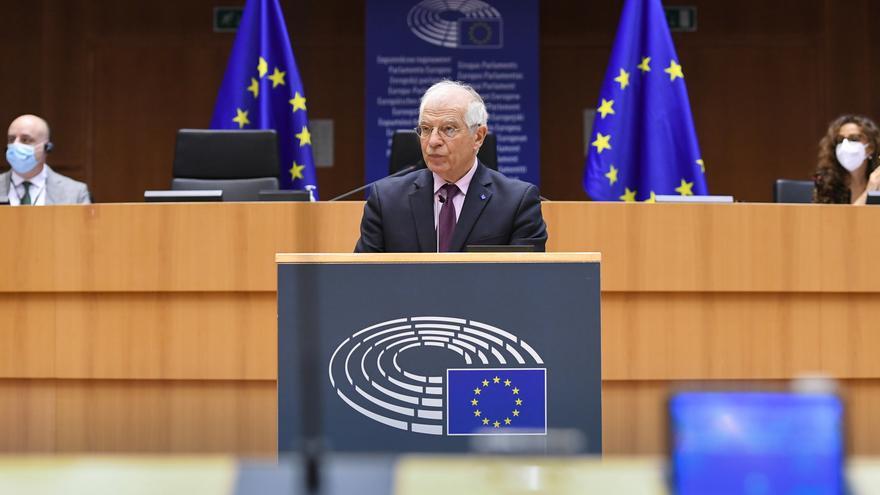 Josep Borrell defended his trip before a tense session in the European Parliament. First in a cooler speech in English; and, later, at the end of the debate, in a more heated speech in Spanish. The EU High Representative has recognized that the context “was very complicated”, but that diplomacy is more than “sending communications from the office”, you have to “go to the specific place at the right time”. And, according to Borrell, that moment was “the arrest of Navalni and hundreds of protesters.” In any case, Borrell traveled with the express majority support of the Council – the Governments -, a body that has the power to impose sanctions – unanimously – and which is divided on what actions to take with the Kremlin.

“Do you know how many official missions from the Member States there have been to Moscow in the last two years?” Borrell asked. And he has replied: “Nineteen, nineteen. Should we go or shouldn’t we go? Or can everyone go except the High Representative? Then why do they have it? It seems that going is not something that is so prohibited, it is pretty normal. ”

Borrell asked MEPs more questions: “Do you think I would not have liked to go into a melee like the comparison of Navalni, who has suffered an assassination attempt and is going from trial to trial with that of some MEP and some of his colleagues? who are campaigning in Catalonia? Do you think it makes sense? Obviously it doesn’t. But I didn’t want to get involved [con Lavrov] because it was not relevant. I preferred to repeat the message that it carried: that the EU condemns, protests and demands that the poisoning be investigated and that he be released because it is not a fair trial. ”

But Borrell, he says, has learned several lessons from the trip: “They are not willing to rebuild relationships if we continue to raise human rights issues, if we continue to bring them up. But it is something that is part of our DNA.” And he also acknowledged: “It is a visit that carried risks that I assumed, because we condemn how the Navalni affair has been managed and because this way I have been able to take the pulse of our relations with Russia. You can believe that the opportunity was the good one or not. that the result has not been good and the media interpretation and the majority of this chamber is that it has not been: but, according to some, because it was not necessary to go; or because it was not necessary to go then; or because we have not discussed the issues; or because we have not defended Navalni enough. If this is a pim pam pum, the beneficiary is the Kremlin, which will be delighted with our divisions. ”

In any case, although “the Russian Government is degenerating along an authoritarian route, with the margin for freedom of expression shrinking and without margins for alternatives”, “it is of key importance to maintain an open channel, it is our largest neighbor and we have It is necessary to define relationships that avoid a permanent confrontation. We must maintain open channels of face-to-face dialogue, especially in matters that have the potential to be conflictive, such as defending the rights of Navalni. ”

Borrell also left the door open to more sanctions: “Without unity there will be no determination and without determination we will not be able to define a good policy. The Member States will decide the steps, which may include sanctions, and I will make concrete proposals in the next Foreign Affairs Council [22 de diciembre]”.

But it did not convince the majority of MEPs, especially those from the East. Borrell found some warmth among his own, the socialist bench, and the empathy of Green MEPs, but members of the ultra-conservative groups and the extreme right have called for his resignation. And some, from the Left, like the Irish, Clare Daly, have remembered the cases of Pablo Hasel and the independentistas condemned by the 1-O.

Between the popular Liberals have also received harsh messages, some requests for his resignation, for his good words about the Sputnik V vaccine and for the rudeness he received from Lavrov. But there have also been many messages towards Paris and Berlin, while the EU sanctions require unanimity and the great infrastructure of the Nordstream 2 gas pipeline connects precisely Russia with Germany.

The Portuguese EPP MEP, Paulo Rangel, has been particularly harsh: “We deeply regret your performance at such a delicate and decisive moment. We regret your decision to go to Moscow, your foolish and condescending statement, that you did not have the courage to respond to Lavrov in public. ” A different tone from that of the popular Spaniard Francisco Millán Mon: “The failure was announced, the situation was terrible. It is not possible to be optimistic about the future of relations, the different positions of the member states do not augur easy adoption of sharp decisions. a difficult job ahead. ” The popular Dutch MEP Peter Van Dalen did go further: “I would like to see another High Representative with more determination.”

Nor was the secretary general of the European People’s Party and Spanish MEP Antonio López-Istúriz, who has even remembered Pablo Iglesias: “Let the trip serve as an example for Turkey, Cuba, Venezuela, and Iran. Fascisms and communisms cheer the Putin’s regime financed by these regimes. There is the vice president of the Spanish Government, financed in the past by Venezuela and Iran. [numerosas sentencias judiciales han rechazo las teorías de la financiación de Podemos por ningún país], playing Putin’s game by eroding the democratic system. In the Spanish case, not a step back in interference with exclusive racism. You have to sit with the democratic opposition, not with the gangsters who only understand sanctions. There are many here who speak of Borrell’s resignation, but not of sanctions: it is necessary to publish in the next Council who is for and against the sanctions against Russia. And who is not, face the consequences. ”

The former Catalan president, Carles Puigdemont (Junts), has called for the resignation of the High Representative: “You have said that Catalan prisoners cannot be compared to Navalni, but Catalan leaders have prison sentences for organizing a referendum. That double standard of the EU is humiliating for everyone. The EU cannot recommend recipes that it does not apply at home. I want a voice for human rights without complexes for everyone, in Russia, China, Morocco and Turkey. You are not that voice, make a Borrellexit “.

Vox MEP Hermann Terstch has not come to ask for his resignation, like many of his colleagues in the ultraconservative group ECR: “I have heard grotesque and ridiculous comparisons between Navalni and a series of criminal thieves and coup plotters who in Spain have been convicted and they are campaigning. In Russia they would have been shot, or imprisoned and poisoned. You went for wool and came back shorn. You went to Moscow to get along despite the atrocities of the Kremlin. It has gone very badly, it has failed roundly”.

Member of the bench in ECR, Assita Kanko, of the Flemish nationalists of the N-VA and an ally of the Catalan independentists, began her speech like this: “Where are the balls of the EU? What was I thinking? It was a disaster You only have one way out of this mess, come up with a tough sanctions package against Putin’s kleptocracy. ”

Green MEP Reinhard Bütikofer responded: “I regret that comrades on the far right and far left understand Putin’s dictatorship better than our democracy. His trip has been a fiasco, but he did not have it easy due to the lack of unity in the Council. Russia has played dirty and we must act. I do not agree that she should leave office. We cannot fall into the trap. Her words have been firm and severe and I hope they will be echoed in Paris and Berlin. She must fight to turn words into fact. You will have us by your side. ”

“The easy thing is to put a tweet from home,” said the Spanish socialist Nacho Sánchez Amor: “With the threat of AstraZeneca we do not ask for the resignation of Valdis Dombrovskis [vicepresidente económico de la UE responsable de Comercio y miembro del PPE]. We Socialists are not going to contribute to disunity. ”

Kati Piri, a Dutch socialist, said: “We have seen a Kafka of the 21st century: after assassinating him, he had to be eliminated. Borrell has pointed out the problems, the kleptocracy, and Moscow has used the visit to humiliate the EU by expelling diplomats, saying that The EU is not to be trusted. What would have happened if the leaders had taken a stronger stance? The Council, on the contrary, avoids taking stronger actions. But Viktor Orbán has vetoed it; Cyprus has given golden passports to Russian millionaires; Macron he has renewed the call for dialogue, and the construction of Nordstream 2 with Angela Merkel has returned. The Council is going to have to call for tough sanctions on Putin and his partners. Borrell has reached the same conclusion. ”

The leader of the liberals in the European Parliament, Dacian Ciolos, has defended that the “visit was a mistake, it would have been better to postpone it if there was no margin to exert pressure to release Navalni. A visit in this context is symbolic.”

According to Ciolos, Borrell “sent the wrong signal. The coherence of the messages is important for those who fight for democracy. You went into a media trap of the Putin regime, after the conviction of Navalni and the arrests of protesters. Putin has trampled international law and its citizens, Russia orders assassinations, disinformation campaigns … I know all this from your reports. You can not say that you are not aware of the sensitivity of this visit. The visit in these conditions has diminished the diplomatic credibility of the EU. Lessons can now be learned from what has happened. ”

Tags: all, Borrell, defend, Eurochamber, may, representative, Russia, tall, they have, to go, trip, World