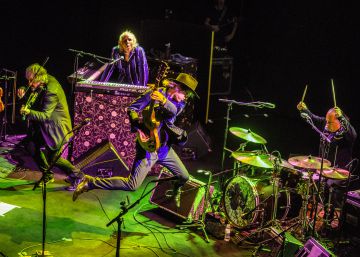 A few days ago, while walking through Dublin, Mike Scott (Edinburgh, 1958), the eternal leader of the British-Irish band The Waterboys, he heard some bagpipes in the distance and, without having seen them, he knew by the sound that it was about Galician bagpipes. Such knowledge was to be expected in a musician who took his group to live in Ireland in the late 80's to soak up Celtic music and record the folk rock album that elevated them, Fisherman's Blues (1988). But he also talks about an artist who has dedicated his life to filming around the world and, above all, who is not afraid to try and experience new things, as shown in his new album, Where the Action Is, which he presented this Sunday in Madrid, as part of the programming of the Botanical Nights, and will do it this Friday, July 12 in the South Pyrenees.

Can a rock legend suddenly plunge into hip-hop? Scott has the answer: yes. In Where the Action Is, a disc full of rock songs and some ballads, suddenly two themes are crossed, Take Me There I Will Follow You Y And There's Love, which have a clear influence of the urban music of the United States. "I take inspiration from all sides," Scott argues, although he has not stopped listening to his favorite classics, such as Marvin Gaye, Miles Davis or The Rolling Stones, feels a special fascination for the new avant-garde, call himself Anderson Paak or Kendrick Lamar, among others.

"I love the rhythms, the grooves, the beat and the drum patterns of hip-hop, but what I like the most is the construction of hip-hop, the way of saying things and the sampling of street sounds, "he explains. This logic in the musical creation, Scott compares it with the ambition of the psychedelia of the 60s and the punk rock of the 70s. "Many of those reminiscences are in hip-hop; his artists are very independent and original, "he says. So he has not had the slightest doubt in venturing into this genre, since, after all, he says that The Waterboys "is not a folk rock band", but "a group that plays any kind of music".

And as well as Where the Action Is is an album without fear of trying new musical styles, the thirteenth album in the career of The Waterboys is also the result of the personal, intellectual and sentimental moment of Mike Scott. At 60, the Scottish musician makes space in the lyrics to talk about "the past, love and observations of today's world". Known is his recent marriage, in 2016, with the Japanese artist Rokudenashiko and the influence he has had on his life and work. She dedicated the penultimate album of the band, Out of All This Blue (2017), and also admits that lately he has been playing the ukulele after his wife asked him to buy one. "Japan has been an influence for me in recent years," he acknowledges.

But if love is so present in his latest songs, it is not only because the leader of The Waterboys has always preferred to speak on a personal level in his lyrics, but because he believes that "love is the solution to all problems, because the troubles personal are the root of the conflicts of the world. " A supporter of liberal democracy, Scott thinks that the great international issues, such as the refugee crisis that Europe is going through, have their origin in "the imperialist policies of the last centuries, right-wing authoritarianism and white supremacism". That is why he claims individual well-being as a necessity of today's societies: "If every human being in the world felt loved, understood, happy and safe, there would be no need for Donald Trump or for people in Africa or the Middle East to escape "