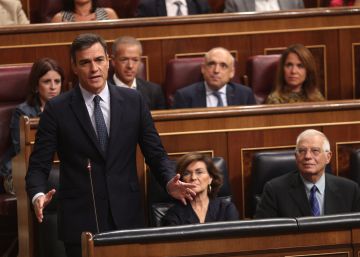 In the Roman calendar the idus brought good omens. Until they killed Julio Cesar some idus and since then they are associated with bad omens. Humans are rational animals, but first animals and then rational. Emotions dominate much of our decisions, including economic ones. That is why in all the expansive and recessive cycles a series of behaviors are repeated. Therefore, the irrational is the homo economicus They continue to teach in microeconomics manuals.

From 1978 to 2015, the Spaniards went 10 times to vote in almost 40 years. Since bipartisanship broke and Parliament fragmented have been four times to vote in four years. In 2016 the elections were repeated and political instability barely affected job creation. The question is: will it affect now?

The problem when analyzing the correlation between the economic cycle and the political cycle is to determine causation. The evolution of economic variables influences the rational part of our brain and emotions affect our decisions and determine the cycle.

GDP in Spain is so softened that it is a delayed cycle indicator. It is advisable to analyze the data of social security affiliates corrected for seasonality and calendar effect, as they do in the US, as the main indicator to determine economic cycles. What is the reality of the facts? 130,000 jobs were created in the first quarter of this year. In the second quarter, 110,000. In the third quarter, if the same rate of job creation in July and August is maintained in September, some 20,000 jobs will be created. Therefore, job creation has slowed to a halt until 2014 levels.

What is the perception of the agents? The consumer confidence index estimated by the August CIS has registered a collapse of expectations not seen since the 2012 recession and has dropped to 2014 levels. Therefore, the perception coincides with the facts and the slowdown in employment. However, when you ask about the situation in your home, it is still high, which explains why consumption grows, although very weak.

The PMI index of expectations of Spanish industrial companies has not stopped falling since the beginning of 2018 and anticipates a deterioration of activity in the coming months, especially the automobile sector is of concern. The service companies anticipate growth, but it is July, before the collapse of customer expectations. Public works have been at a minimum since the 1980s and housing construction has begun to destroy employment. And agriculture, our main export sector, has lost much of the seasonal production due to the cold drop.

When uncertainty increases, citizens look at La Moncloa. Although the bubble formed with Aznar and Rajoy called for the rescue, the Spanish mostly rely more on the right to manage the economy. And the day after it seems that fragmentation will continue. We will see.