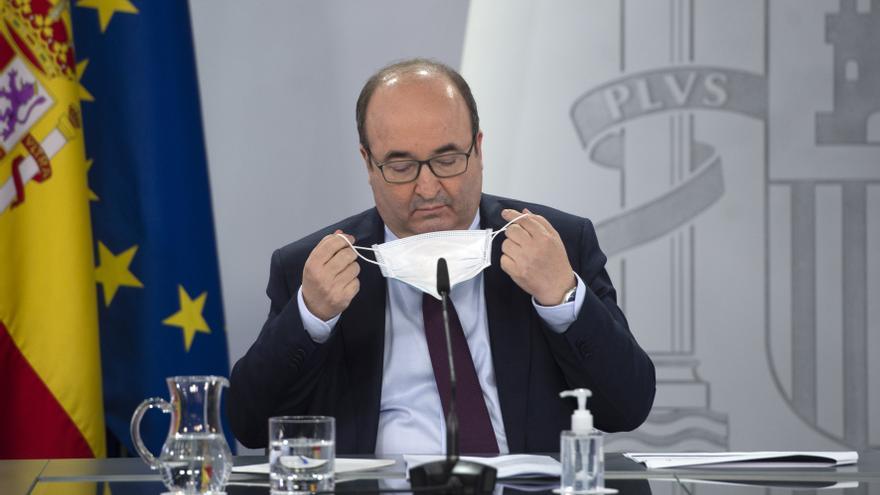 The Minister of Territorial Policy and Public Function, Miquel Iceta, wants to speed up the oppositions of the General State Administration (AGE) and increase the number of selective processes from three to two, as indicated this Wednesday at a press conference to present the guidelines for the change in selection matters in the AGE. The general director of Public Function, Isabel Borrel, has indicated that the speeding up of the oppositions will begin as of this Friday.

In fact, this Friday there will be 14 calls for 10,254 places. Of these, 3,200 correspond to new income, 1,428 to stabilization processes and 5,805 to internal promotion. “Changes are introduced that will significantly shorten the deadlines, with the realization, for example, of the theoretical and practical exams on the same day,” according to Borrel.

The minister stressed that the selective tests will be simplified, to be held on the same day and it will no longer be mandatory for one of them to take place in Madrid, but there will be 19 points where these selective processes will be carried out, “because we want there to be a real equality of access and that the result of access responds to social, territorial and gender diversity “.

He also stressed that the practical nature of the tests will be strengthened and internal promotion will be promoted “to break with the idea that you enter the Administration and end up retiring in the same position.” In this line, he has pointed out that the experience that is being acquired in the Administration will also allow a promotion and a true professional career in the public function.

Iceta has explained that these guidelines for the change in the matter of selection in the AGE will be specified in an Executive Plan, which will be raised to the Higher Personnel Commission before December 31, 2021. In addition, he has pointed out that although it is wanted To guarantee its full effectiveness in the Public Employment Offer (OPE) of 2025, the idea is to “get closer to it from now on.”

The excessive temporary nature of public employees is not a secret. The EPA survey already anticipated the resounding breach of the agreement in its purpose of reaching an 8% temporality this year, since the percentage of workers with temporary contracts, instead of decreasing, has increased in this period. If in 2018 it was around 26%, now it is at 28%.

The document presented this Wednesday includes an implementation of the multi-year planning and a strategic vision of the OPE. According to Iceta, as of 2022, each January the calendar of the selection processes that will be convened in the year will be published, with the estimate of the number of places, the start of the tests and duration.

Regarding the process of access to public employment by opposition, the minister wants to progressively shorten the number of exercises, unifying the compatible tests or carrying out more than one exercise on the same day, even if they are eliminatory.

Minister Iceta has also responded this Wednesday about the legal reform against abusive temporality in which the Government works. The Ministry of Public Function has already submitted to the unions a first draft to modify the Basic Statute of Public Employees, to which it has had access elDiario.es. This is a first draft, so it may still undergo many changes in the negotiations, which will take place in the coming weeks. Iceta’s idea is to present the reform, agreed with unions and other Public Administrations, in June.

Among the most notable changes in the proposal is that the interim workers automatically cease after three years in their post, as El Periódico has advanced. In the event that public institutions do not fill a position, they will have to distribute the workload among the staff person since they will not be able to hire temporary staff for a year. These changes that the Ministry of Public Function is studying would not affect the current eventuals who are working in a public body.