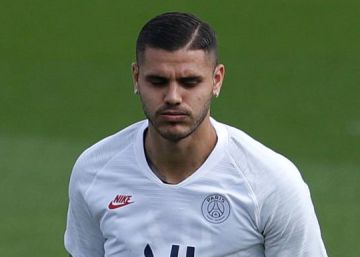 In one year, Mauro Icardi (Rosario, Argentina, 1993) has lost everything: the bracelet of the captain of Inter Milan, the confidence of the fans, that of his coaches Luciano Spalletti and Antonio Conte, and even the call for the Copa América with the Argentine national team. When the last summer market was about to close, the Italian team gave it up for only five million euros to PSG where he will spend a season of atonement. This Wednesday, the injuries of Cavani and Mbappé and the sanction of Neymar will give him a new opportunity, perhaps the last one, to be a starter in his first Champions League match with the French against Real Madrid.

The key character to understand the decline of the Argentine is Wanda Nara, agent and wife of Icardi, who with his statements in the talk shows Italians and social networks worsened their relationship with the interist group. During the month of August, Icardi rejected the Monaco offer and received no proposal from Boca Juniors, as Nara wanted. When the assignment to the PSG was finally formalized, the model also declared: "Of the three options, that was the worst." Then, bewitched by the beauty of the Park of the Princes after seeing Icardi's reception against Strasbourg last Saturday, he rectified: “I said that of all the options we had, the PSG was the worst logistics. But for me, not for him. Mauro is very happy. ”

These misunderstandings are not new in the love and hate story between Icardi and Inter. On February 3 of last season, the Milanese lost at home against Bologna (0-1) and the striker was one of the worst in the game. He immediately wrote a message against his fans on his Instagram account: "If you don't love her when she loses, don't love her when she wins." Only ten days later, Slovenian goalkeeper Samir Handanovic was named new captain and Icardi did not travel to Vienna, where Inter played in the Europa League against Rapid.

Next, Argentina also resigned from Icardi. Scaloni, the coach, said: "The present of Mauro is complicated and we can not be part of that present. It is obvious. The selection does not suit what is happening. I was a player and when these issues are touched, I prefer don't get involved. You have to fix your situation and from there we'll make decisions. " Thus ended the black February, although it was only the principle of separation. In the end, he could not win his place for the Copa América.

Icardi felt betrayed and posted on Instagram a list of all the sacrifices he made for the love of Inter, such as the desire to stay despite the interest of other teams and the games he played injured. That feeling became sad when he realized that neither Antonio Conte, a substitute for Luciano Spalletti, was counting on him. Juve's former coach decided to bet on Romelo Lukaku. And for Lautaro Martínez, who took advantage of the free fall of Icardi to win a place first in Inter and then in the Argentine national team with which he scored a triplet in the last match against Mexico.

The signing of Lukaku has not aroused Icardi's nostalgia in Inter's locker room. Nor did his 124 goals in the last six seasons in Milan. Despite Tuesday's draw against the modest Slavia Prague on the first day of Champions (1-1), Conte's are now first in Serie A with three wins in three games and already have a two-point advantage over the Juventus Wanda Nara, however, leaves the door open for a possible return of the striker to Italy, as he stated in an interview on September 6 in the Corriere della Sera, although he maintains that Inter's intention has always been to sell it.