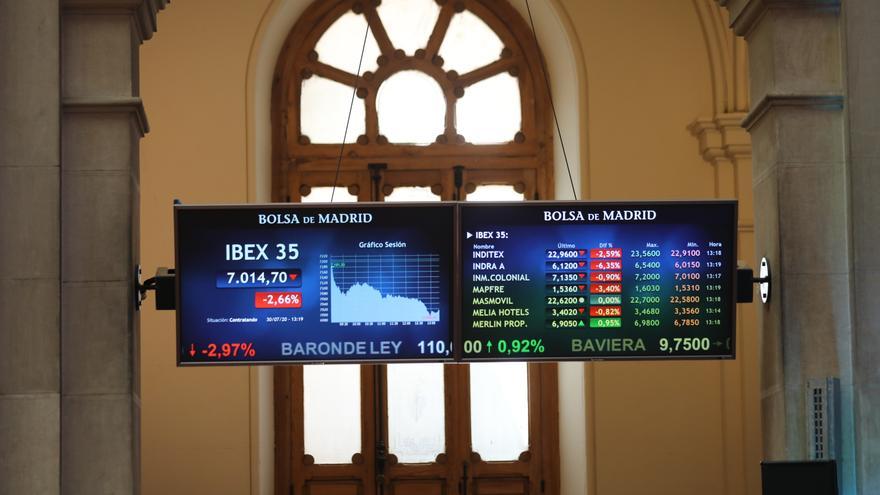 23 executives from 15 companies on the Ibex 35, the stock market index that brings together the largest Spanish listed companies, have invested some 22.47 million euros in shares of their own companies since the outbreak of the coronavirus pandemic in March, according to data collected of the records of the National Securities Market Commission (CNMV).

Some of the top managers of the selective have reactivated the purchases of titles since the last days of July, as the succession of rebounds and doubts about the recovery of the economy have made a dent in the Spanish stock market.

The majority of that amount, 15.5 million, nonetheless corresponds to purchases of shares and debt made last March, when the world's stock markets were an unprecedented crash as a result of the great seclusion before the almost total stoppage of the activity that would then arrive in half the world to stop the escalation of infections.

Then, the directors and managers of the Spanish stock market securities purchases multiplied, with acquisitions for an amount greater than 113 million euros, according to the latest data available in the records of the National Securities Market Commission (CNMV).

In the case of the first swords of the most important companies in Spain, after the buying frenzy in March, the volume of operations decreased drastically in April, rebounded in May and, after the de-escalation, it fell again significantly during June and the most of July. In August, it was reactivated although the data is still provisional and it is possible that in the coming weeks new purchase orders will emerge in the regulator's records.

Transactions such as the 549,000 euros invested in Banco Santander securities by its president, Ana Botín, through the company Cronje SL, date from the last day of July. The day before, on July 30, its executive president, Fernando Abril-Martorell, paid more than 192,000 euros in Indra securities. On August 6, the president of Telefónica, José María Álvarez-Pallete, allocated more than 352,000 euros to securities of the multinational, an operation that raises Pallete's investment in shares of the company to more than 770,000 euros since the crisis of the coronavirus. Since January, the prices of Santander and Telefónica have fallen, respectively, by 47.4% and 43.2%, while Indra has fallen by more than 39%.

The last relevant operation was the one carried out by the CEO of BBVA, Turkish Onur Genç. On August 25, he allocated 1,265 million to the purchase of half a million securities of the bank chaired by Carlos Torres, who this Monday plans to attend the act that President Pedro Sánchez has called at the Casa de América in Madrid together with representatives of large companies and civil society under the slogan "Spain can".

The CEO of BBVA, which is also another of the most affected securities so far this year, with a drop of 44.8% since January, is the second Ibex executive who has allocated the most investment since March to the company that pilota, with 3,965 million euros in titles. The largest disbursement by far (11,723 million) corresponds to Cartival, the company with which the banker Jaime Botín channels his investment in Bankinter, of which his son Alfonso Botín acts as executive vice president on behalf of that firm.

All that investment by the Botín was made between March 13 and 16. At that time, although at slightly higher prices, the bank's CEO, María Dolores Dancausa, also bought securities, allocating almost 300,000 euros. Both invested in the worst of the crash, at prices between 3.36 and 3.99 euros, so they already hoard significant capital gains if you take into account that Bankinter closed on Friday at 4.66 euros. In the case of Botín, the gross capital gains with these operations are around 6 million.

Among the most active executives in recent months are the top two swords of the Merlin Socimi, with a joint investment of more than 1.6 million. The managing director of the real estate, Ismael Clemente, has communicated from March to July 30 purchases for a total amount of 749,413 euros in securities of this company, dedicated to the rental of offices (mainly real estate) and whose price has fallen by almost 40 % this 2020. For his part, the other executive director, Miguel Ollero, has allocated about 880,000 euros to Merlin securities in a battery of purchases also made in March, April and July.

Those who don't buy

Although there are operations that are notified months late, at the moment there are no securities purchase operations by the executive directors of a good part of the Ibex companies. They are Acciona, Acerinox, ACS, Aena, Almirall, Amadeus, Bankia, Cie Automotive, Colonial, Enagás, Grifols, IAG, Iberdrola, Inditex, Meliá Hotels, Naturgy, Red Eléctrica and Siemens Gamesa.

However, in the case of the owner of Iberia, recently the president of the latter, Luis Gallego, notified the CNMV of the purchase of 23,888 IAG shares for about 110,600 euros on March 6, shortly before the declaration of the state alarm and the closure of airspace. Gallego is not currently a director of IAG, but it is expected that on September 24 he will become the group's chief executive. These titles, after the collapse that the price of the owner of Iberia and British Airways has suffered (with a fall of 66.8% since January, it is the worst value of the Ibex), currently have a value of slightly less than 57,300 euros.