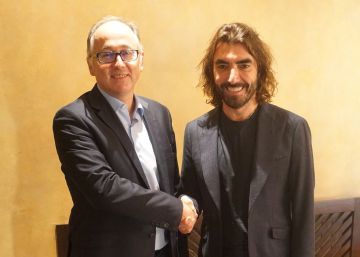 The night had been busy at Javier Hidalgo's house, in the select Madrid neighborhood of Puerta de Hierro. When the first rays of light came out, at 6.30, the agreement was reached: Iberia would buy Air Europa for 1,000 million euros. They were present, in addition to the host, at the time CEO of Air Europe, the president of Iberia, Luis Gallego, and the financial director, José Antonio Barrionuevo, as well as representatives of the Linklaters and Garrigues law firms, advisers of one and the other, who expressed their signature. They had enough time to relax from the tension, inform the government at a prudent time and communicate it to the stock market authorities before the markets opened.

There was a hurry to close the operation as soon as possible, which contrasted with the more than six months of negotiations in which they had managed to keep the operation secret, without leaks. The most feasible reason is that the IAG group, owner of Iberia, wanted to appear at the Capital Markets Day that he celebrated last Friday in London with all the cards on the table. And one of those letters was the purchase of his fierce Spanish competitor. But also that other groups, such as Air France, pressed in the bid and did not want to lose the game that strengthens the leadership in the Latin American market.

The sale of the crown jewel of the Globalia group It was led from the beginning by Javier Hidalgo, son of the founder and president, Juan José Hidalgo, who preferred to stay away from negotiations. However, as leader and maximum shareholder, he was at all times informed of the progress.

It all started with a wink launched by Gallego to Hidalgo son to learn the interest shown by Air France. From there it was a first meeting, there by the spring of this year, in which there was a total understanding between the two. After the first advances, the teams of advisors (KPMG, Morgan Stanley and Garrigues, by Iberia, and EY and Linklaters, by Air Europa) were assembled, to which the Clifford Chance firm, hired by Iberia, was subsequently added how Specialist in competition issues, which will be key for the operation to move forward.

The negotiating team was seeing the synergies and incompatibilities of the operation. Although Air Europa, as with the other airlines that the IAG group has acquired, will continue autonomously, the problem lies in the competition. In principle, it seems that the difficulties come from the overlap in national flights and not so much from transatlantic. The European authorities that analyze the operation are expected to have a position from the second half of next year. IAG defends, however, that it does not violate the rules and he hopes he won't be forced to close routes or sell slots (takeoff and landing permits).

It all started last spring, after knowing the interest of Air France

For Air Europa, the operation involves clearing the doubts that exist about the future of the sector. Concentration times are coming and you have to act with a head. There is overcapacity, the price of crude oil is very volatile and there is increasing conviction that an economic slowdown is approaching. This is joined by the Boeing crisis, with which Air Europa has contracted the renewal and expansion of the fleet. That is, they are all clouds that make the survival of many airlines difficult. Therefore, the 1,000 million in which the transaction was closed is considered a fair amount by buyer and seller and by the negotiating team. They are neither exorbitant nor a bargain, according to analysts.

Gone are the times when today's partners threw the tackle to the head and in which Hidalgo Sr. came to try twice, while attacking his fierce rival, enter his capital. The first was in 2001, when it had prepared an exclusionary agreement according to the then president of Iberia, Javier de Irala, and its CEO, Ángel Mullor. And the second, in 2007, when he tried, with a group led by Gala Capital, to acquire the airline in an operation that aborted Caja Madrid, then shareholder of Iberia. The financial institution became strong after acquiring the shares of El Corte Inglés, BBVA and Altadis until it reached 23%.

Then Iberia was in free fall and Air Europa was rising as an aspiring first Spanish airline. Until in 2011 there was the merger of Iberia with British Airways in the current IAG, which changed the drift and improved the prospects of the Spanish line despite a few years of uncertainty. And now, after many rants and expletives, the two shake hands.

Hidalgo Sr. is also no stranger to buying and selling attempts. In 2016, it reached an agreement principle for the Chinese group Hainan to enter as a majority. However, and for no apparent reason, they decided to break up overnight. He has also negotiated with Air France, which has always been on the prowl. To this we must add the attempt to take the Globalia group on the stock market in 2013, which was frustrated.

For Juan José Hidalgo, the agreement has a bittersweet taste. It loses, if the Competition authorities do not prevent it, one of its weaknesses, which it had never wanted to part with; but he knows that the agreement is necessary to ensure the future of the group. In addition, it does it at a great price. Of the 1,000 million, he takes 515.8 (51.58% of the capital is in his hands). His son, who sold 5.1% to the Matutes group in 2013, has 17%, which he subsequently bought from Banco Popular and Unicaja, traditional shareholders. His daughter Cristina owns 7%; his firstborn, María José, 5.1%, and his wife 5%. His brother Juan Antonio completes the capital with 9.1%.