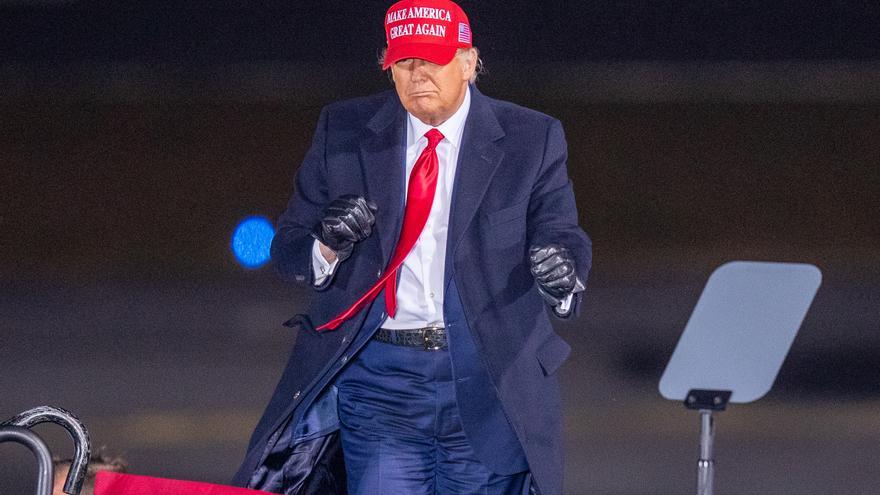 In the early hours of Wednesday, Donald Trump delivered the grandiose victory speech that he carefully crafted in 2016 and never delivered. "Hail to the Chief" played in the background as the president took the stage, around 2 in the morning. Behind him, a pile of American flags. In front, a crowd of descendants and supporters without masks shouting: 'We love you!'.

Trump himself was so shocked by the unexpected 2016 victory that he himself seemed quite stunned when he gave his victory speech. They wrote it so fast that you could even read a lot of praise for Hillary Clinton, the woman he was addressing with "lock her up," at her rallies.

After the stumble of four years ago, this Wednesday Trump did give the speech in his own way, in the majesty of the East Room of the White House. "Honestly, we did win this election," he said, and the room erupted in a frenzy of cheers.

Wednesday's show says a lot about the man and the American nation, in this difficult moment where the country is going through the worst moment in its 244-year history: a sitting president declaring victory without winning and affirming that fraud is being committed. against the American people amid the presidential elections with the largest turnout in 120 years.

This is democracy a la Trump.

While the president deduced his imaginary little victory, the Democrats were going through their own private hell. If for Trump, the story of the night was to pretend to have won as the body asked him to do; For Joe Biden and his fellow Democrats, it was obediently following the rules, despite being the least they wanted at the time.

The ghosts of 2016 also weighed on them. It was around 10:30 on Tuesday night when the nerves began, the first results from Florida produced a well-known sensation of chill in the country.

Here we go again. Fasten your seatbelts, the journey is hard.

In Miami-Dade County, South Florida and home to Cuban-Americans, Biden's numbers were remarkably low. A demonstration that he had pierced the wall of disinformation built by the Trump campaign to discredit Biden by ensuring that the Democratic candidate would lead the United States into the black night of socialism.

At 11:30 p.m. the feeling of defeat among Democrats began to intensify, believing that 2020 was a new version of 2016. The various paths that Biden had to get to the White House seemed to be shrinking after the first results, the Which gave Trump advantages in states like Georgia or North Carolina, and defeat in Florida.

And then the inevitable happened: just like four years ago, all eyes turned to that trilogy of hope, fear, and embarrassment that are Pennsylvania, Michigan, and Wisconsin. The so-called "blue firewall", after the color of the Democratic Party, which Clinton trusted and which Trump managed to bring down.

"We've been saying for a long time that anything could happen, that this is a very close competition, and that it could be decided in these three states," said CNN's Jake Tapper, unable to hide a nervous laugh at the surrealism of the situation. so similar to 2016.

Then the gears began to turn the other way. It all started with a 'yes', 'yes, Joe Biden still has the path to the presidency open', with a 'yes, that was just a red mirage' (for the color of the Republican Party).

Considering the high number of mail-in ballots during the pandemic, it was clear that Biden's election night was going to start off bleakly, then brighten as the votes were counted.

The pattern was visible in several of the disputed key states, which could give him victory. There was Wisconsin, where Biden's victory was almost assured Wednesday morning. Also Michigan, another 'rust belt' state that in 2016 decided Trump's victory, was going from right to left as the night wore on. Georgia, where Biden seemed to have flipped at first, was a possibility again when morning came.

So yes. By dawn Wednesday, Biden was still on the track and with a chance of finding a way to relieve Trump in the Oval Office.

Then Biden's bag went Arizona, which with its growing Latino population showed new perspectives for a changing and renewed America. Even in Georgia, which had not supported a Democratic presidential candidate since Wayne's World was shown in theaters, Democrats had reason to cheer looking at Biden's reach.

And then the 'no' came. No, it wasn't supposed to be like this. Not this time.

How could the competition be so close for Trump to also find options when hours had passed since election night? We are talking about the president who was in charge when more than 230,000 Americans died from a virus that other countries managed to contain; of the man whose Administration ordered the separation of migrant children from their parents without worrying about their subsequent reunion (three years have passed and almost 600 are still separated), of the man who had no problem in having tear gas fired at peaceful protesters in order to take his picture ; of the man who reinterpreted the founding principle of the nation, "We the people", as "We the whites"; and of the man who believes that the climate crisis is a hoax.

No. This was not planned.

At midnight, nerves were palpable among the Democratic Party luminaries who turned to television stations to proclaim their unwavering confidence in Biden.

James Carville, Bill Clinton's top strategist when he won the White House in 1992, put a brave face on bad weather during an interview on MSNBC. "To all the Democrats who are listening to me, put the razors and sleeping pills back in the bathroom cabinet, we will be fine," he said. Then he held up a bottle of vintage champagne before the camera and added: "I don't mind leaving it in ice until Friday, I've been waiting for this for four years and I can wait four more days. "

Too bad that a few days before Carville had appeared on the same channel, bragging that the election "was not going to be close" and that he would open the bottle at 10:30 at night.

It's wonderful what a few hours of night's rest can do to change your perspective. At midnight, former Missouri Democratic senator Claire McCaskill also showed a serene face assuring that the night was passing as it had always been expected. Going back to the once decisive three states of the Blue Firewall, he said, "Those three states will give Joe Biden the presidency as planned."

By the morning when it came out for the second time on MSNBC, it had taken on a more thoughtful tone. He still believed that time was on Biden's side and that patience would eventually triumph. But this time he added a more somber assessment. "This is a testing moment," he said. "We cannot again assume that Donald Trump is an aberration for who he is and the way he behaves. He connects with many Americans in ways that many of us have a hard time understanding, but we have to understand him, because if we want to remain a superpower we have to unite this nation. "

"In 2016 Trump came along and shattered the old order in a pretty definitive way," said Bob Woodward. The veteran Watergate journalist, in the face of whom Trump admitted to lying to the American people about the lethality of the coronavirus, had harsh words for Democrats. “If you want to know what happened in 2020, Biden represents the old order; the Democratic Party has to find a way to change itself. "

This election will not end until it is finalized. Joe Biden won both Wisconsin and Michigan and could be the next president of the United States. The painful autopsy on what happened has just begun.