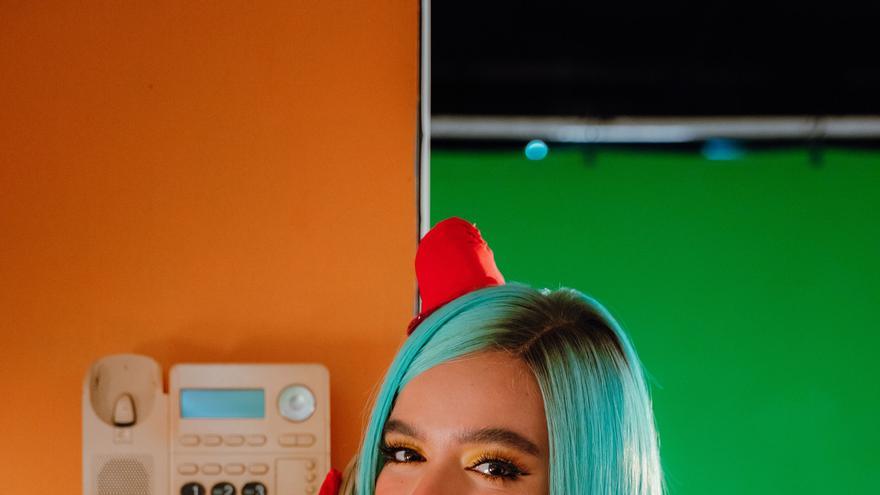 Miami, Mar 26 (EFE) .- Karol G had a great fear when he began to prepare his new album, “KG0516”, which was released this Friday. “At the moment there are many urban artists and I did not want to be one more of that panorama. One more of the bunch, “he acknowledges in an interview with Efe.

Therefore, he entered the studio in search of “something different” and he succeeded. “KG0516” is a 16-song production that not only includes urban pop and reguepop that has revolutionized the world, but also traditional reggaeton with the “dads” of the genre, bossa nova, ballads and even a corrido of his own.

For Carolina Giraldo (her real name) it was important that her new music made everyone who listened to it “live experiences” and that each song was “like a stopover in a new place”.

Wrapped in a set of plasticized yellow jacket and pants and while fixing her long blue hair, the Colombian singer assures that the possibility of participating and influencing people’s lives “moves her more than anything else.”

In the process, he found powerful and even unexpected allies. In addition to Nicky Minaj, who accompanied her on the smash hit “Tusa,” Karol G featured the legendary Ludacris and TikTok star Emilee, with whom she sings the album’s other bilingual song, “Beautiful Boy”.

Nicky Jam, Chencho Corleón, Wisin & Yandel, Ivy Queen, Zion, and Alberto Stylee accompanied her in an “invention” which she gave the name of “Leyendas”. It is an eight-minute song in which the artists exchange segments of songs that made each other famous.

His compatriot Camilo – “whom I love”, he confesses – composed and recorded with her the song “With you I’m going to death.” With his “great friend” J Balvin and his ex Anuel AA he presents “Location”, and with Mariah Angeliq he performs “El Maquinón”, which is a kind of continuation of “Bichota”; two risque themes that he assured speak to women “who are masters of their sexuality and their power.”

In the same vein is “Bad Cat” with Naty Peluso. He also has songs with Juanka & Brray, Ozuna and with Yandar and Jostin.

Karol G assures that among the 16 songs on “KG0516” there is not one that does not move her emotionally and does not represent “an important challenge”, although she admits that perhaps the most surprising song will be “200 cups”.

That is the title of his first urban corrido, of his own authorship, which he recorded accompanied by the guitar of Danny Félix, one of the creators of the new genre of lying corridos.

“As it is a flight, I wanted each song to be like a stopover that would take the listener to a different place,” he highlights.

Hence the name of the album: “KG0516”. He found it amusing to name it with that mix of letters and numbers that characterize flights. Obviously it started with your initials, but it’s the numbers that have the most meaning.

“0516 is a very special date for me. May 16, 2006 was the first time my parents signed an artistic contract on my behalf. It was the first time that it was written that Karol G called me and in a certain way it was when this journey began that I want to take you all to ”, he explains.

THERE IS NO EVIL THAT IT DOES NOT BRING GOOD

Although there are times when she “gets depressed”, she admits that if it weren’t for the covid-16 pandemic, “I wouldn’t have had the time to sit down and choose the equipment, produce, compose myself.”

“But yes, I miss 2,000% traveling and not only the stage, but sharing with people, hearing different ideas. I find it very necessary ”, he continues.

The artist declares that perhaps the idea of ​​the trip came from an unconscious need to return to the madness of airplanes and tours, because she dreams of singing songs like “Tusa”. “Oh Lord!” and “Bichota” before thousands of people.

WITH FEET ON THE GROUND

When Karol G presented her previous album, “Ocean”, in 2019, she was convinced that she would leave music in five years to dedicate herself to being a mother. She was recently engaged to her Puerto Rican colleague Anuel AA.

Since then the relationship has intensified and fell apart, as it seems to be described in the song “The Boat.” Although it was clear that he did not want his personal life to steal attention from the album, he does recognize that the success of Karol G had changed the life of Carolina the woman.

“Of course I want to have a family, but since then I have learned that you don’t have to plan. You have to work and work. Who knows what might happen. Things have changed a lot since 2019 ”, he explains.

The one who hasn’t changed much is her. Karol G remains just as focused and is very clear that “just around the corner from a success could be a failure”.

“I think that’s why I don’t get stuck when something goes well, although I recognize that I would have to celebrate and believe things more,” he says.

He gives as an example being tied with Balvin in the nominations for the Latin American Music Awards, which are delivered on April 15 in Sunrise (Florida), because “that night I celebrated the nine nominations, but the next day the magic was over and the only thing in front of me is the work I was following ”.