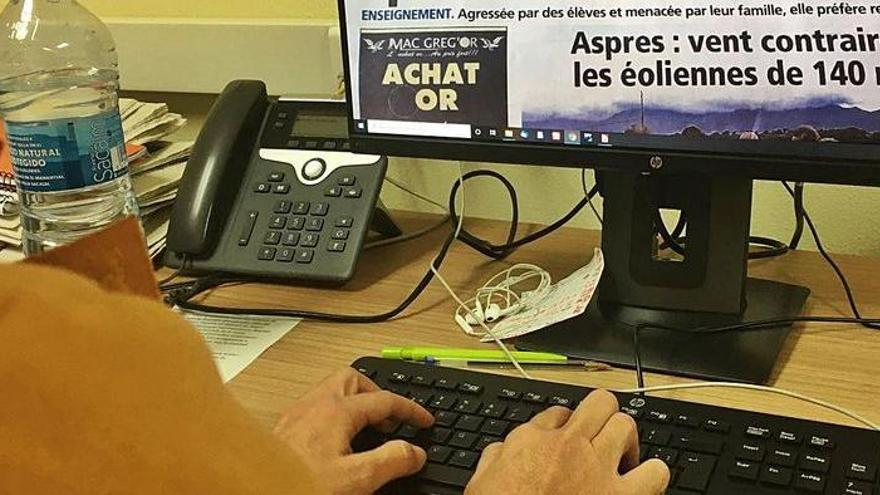 “Beheaded in France a teacher who showed cartoons of Muhammad in his classes, “” The beheaded teacher was pointed out by students yours in exchange for money “,” The detainees amount to 27 “,” The father of a student and an Islamist launched a religious decree against the teacher. “They are newspaper headlines after crime of the French educator Samuel Paty. “It’s like going back to medieval times. They didn’t just want to cut off his head but also his thinking. The life of a high school teacher in France is a sinvivir and I do not believe that the beheading will change anything in the educational system “, assures a woman from Elche, a Spanish teacher in Secondary in Perpignan, whose name in this article will be fictitious: Marta Antón, well” I have very afraid, for me and for my daughters. Because not only have two teenagers attacked me, their parents have also threatened me, “he says with a broken voice.

These days he is in Elche. They are on vacation in France, but also, “I needed it.” She is on leave for an assault that allows to visualize “how is the situation of the French educational system. Her professional origins – Marta is a journalist – have helped her take a step “that no one takes in that country. They do not dare to speak, to denounce, to say what is happening, because it is not only the fear of suffering an attack. There is also the rejection from your coworkers, of the director from the center, that he is not a teacher and that promotion is at stake to the extent that he has more or less expelled or incidents in his institute. Even from the Inspection. Nobody defends us, “says Marta, whose case has jumped to the international press because” I am the only one speaking. ”

Today he goes to an interview in his hometown with a mask that only lets his eyes see. It’s enough. In them the Calvary lived is perfectly perceived. They look glassy, ​​wet, infinite … while he tells how that morning “two students, 15 years old but 1.80 tall, they attacked me because I expelled them from class “. The fact is that “I already knew who I was playing it with. I have been a teacher for five years and as soon as I arrived at the profession, -where by the way it is very easy to access because nobody wants to practice it-, from the Directorate of the center they told me that the first months will dedicate them to act like classroom cop, not to try to teach, to forget about the program. ”

On the day of September 1, the teacher from Elche was living a normal class day: “They were laughing at me, my accent when I spoke French, they shouted, they banged on the table because I don’t know how to pronounce Mohamed …”. Marta insists that does not want to demonize any origin, race or religion. He repeats it during the interview several times, but clarifies that “in this institute most of the students are French of Maghreb origin. Fifth or sixth generation. And I have been insulted, threatened and attacked several times, so I live in fear and I’m not going to return anymore. ”

With all the commotion in the class, Marta addressed two students and “I asked them to let me teach. They continued. I expelled them. I told them they should go to the head of studies office. They refused. I told them, bluntly: – Outside, you’re leaving class. And they told me, with a look of hatred and a contemptuous tone to speak to them with education, which was already touching their balls. “Then, the teacher asked a student to notify the head of studies and” that’s when they said they were leaving. I stood at the door to close it and have them wait for the teacher in charge and they were already on top of me, on my face, without giving me the chance to move. One pushed my shoulder to open the door. I didn’t let him. The other one went back to where there is another door and suddenly he appeared behind me and pushed the door against me giving me a sharp blow on the back. I could no longer resist the struggle. ”

And what happened, would they be expelled immediately? “No. None of that. In France there is a movement that, translated, means ‘Don’t let the wave rise’, let everything calm down “. So would the director support her? “Neither. Not the Montpelier Academy, which is like academic inspection. In fact, the principal told me that I was exaggerating, that I should change the way I teach because they are conflictive students and with a different type of character, that I had to accept the insults. “

As the head of the center “says that he does not make decisions in hot water”, Marta had to wait several days to know the resolution of the file: “Two days of expulsion from the center for disrespectful behavior”. How? “Yes, yes, that’s why. And the director didn’t even inform me that it was a work-related accident due to assault in the workplace and that the Administration should give me legal protection.”

Having seen what was seen, Marta made a decision. First he reported the events to the Police “for physical assault – he has tendinitis in one arm and several blows – and morals.” And then “run away from the institute, I resign, I do not want to know anything about teaching. Power is held by the students and their families, and by the principals, who are administrators, not teachers. Nobody wants to be a teacher in France or to report because they will not have support. The centers are day nurseries for teenagers who in the afternoons are posted five hours in a corner to warn if the police are coming. ”

When the event occurred and, “as the protocol indicates, I called the parents to talk to them about what happened. They threatened me. They told me I should have thought better of it before expelling them. The mother of one called me a racist three times and laughed like I was crazy. One of the parents told me that he was going to report me before I did. ”

Marta believes that in Spain “It is still different because the director is a teacher and defends his classmates. My director does not answer my emails. Shortly after the terrible beheading of Samuel Paty, I told him that if now he would change his qualification on what happened to me and I would consider that physical aggression is grounds for definitive expulsion. I am still awaiting your response. ” The case of this woman from Elche is one of the hundreds that occur daily in France but that no one dares to report, “he says while showing the regional newspaper on the screen in which his story is told and receiving, at the same time, a call from the New York Times.

Tags: fear, I resign, Students, they attacked, they threatened