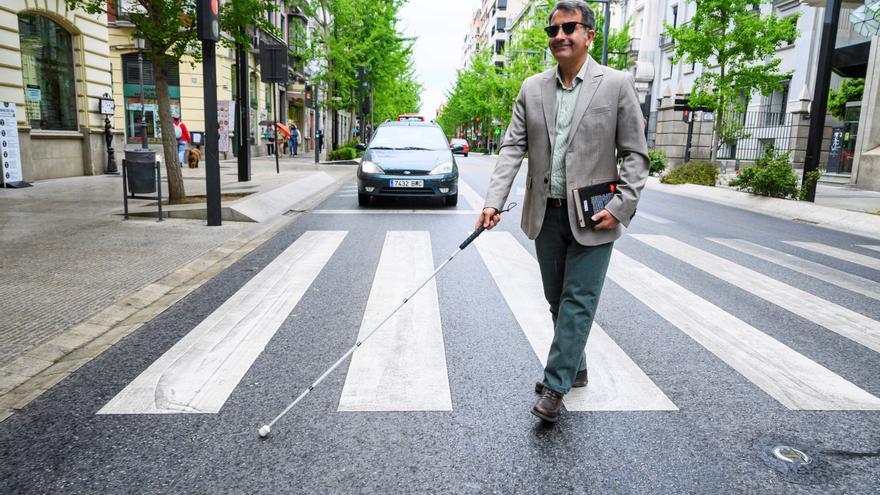 Granada, Apr 17 (EFE) .- An explosion at the Cerro Muriano base (Córdoba) left the military José Soto blind and without a leg, a script twist that allowed him to “give channel to my passion”, to study History “almost by ear, “get a Ph.D. and become a researcher and award-winning writer for turning words into pictures.

The historian and novelist José Soto Chica (Santa Fe, Granada, 1971) won the IV Edhasa Prize for Historical Narratives this March with his novel “The god who inhabits the sword”, a recreation set in 6th century Hispania with the that has made history again.

“Terrible student” but always attached to a book, Soto Chica could be the protagonist of any prize novel for his ability to reinvent himself and for the perseverance shown since, in January 1996, the explosion of an artifact during an internship at the Cerro Muriano military base left him blind and without a leg.

“It was a very serious accident, I was aware that I was not going to live, but fourteen days later I came back from the coma and I was very clear that it was a second chance, that it was going to allow me to channel my passion,” explains Soto Girl in an interview with Efe.

A version of The Expedition of Ten Thousand aroused the passion for books of this Granada-born man who became a military man, served in Bosnia and needed a drastic script twist to bet on his passion, “because history is my way of life.”

“The year after the accident, I decided to start a history degree at the University of Granada and I was a brilliant student,” acknowledges the writer who, after 36 enrollments and a scholarship, did his doctoral thesis based on Byzantine studies.

“I did the race almost by ear. On a cassette I recorded and did the exams live because the technology did not accompany,” recalls the researcher, who at home had the “yogi bear, a giant machine to adapt the content.”

“Illusion and determination allow us to do things that in theory cannot be done, and this is also a teaching. I never thought that I could dedicate myself to history, I was only going to do a degree for fun”, recalls this researcher from the Center for Byzantine Studies of Granada.

As a writer, Soto Chica debuted with academic titles, the first books focused on Persia and Byzantium that were almost an essay for his historical novels, texts that mix the accuracy of facts and “life, because I thought I had to put meat on it. and blood, the way to love or hate at that time. ”

“The story is liked but usually it is told badly. The society that does not know its history is like the adult who loses his childhood, an unhappy and incomplete being because he is missing a part,” he summarizes.

He acknowledges that among his fellow “academics” there is a certain distrust towards the historical novel, a format that he considers a “fantastic tool” to get people to “get closer to history and become passionate”, which is why he creates a social work to disseminate.

“Investigating is precious, confronting old documents, putting black on white”, highlights Soto Chica, who assures that with a computer and technology there are no barriers.

“I only realize that I am blind when I get up and have to take my cane to go to the bus,” says this expert who turns a scanner into his eyes, the way to access the funds of any library because “everything is digitized and you just need interest. ”

“There are things that you cannot do as a blind historian, like looking at a map or a mosaic, but there I turn to friendly eyes, those of my wife or my children, who describe it to me. Because they say that a picture is worth a thousand words but I turn that around, “he explains.

This way of turning the saying around marks the style of his novels, of which the critics emphasize that they are very visual, almost cinematographic.

“I live imagining and project in the text my desire to see the battles, the landscapes, to turn the words into something else, to give them the third dimension,” sums up this novelist and writer who has also made history.