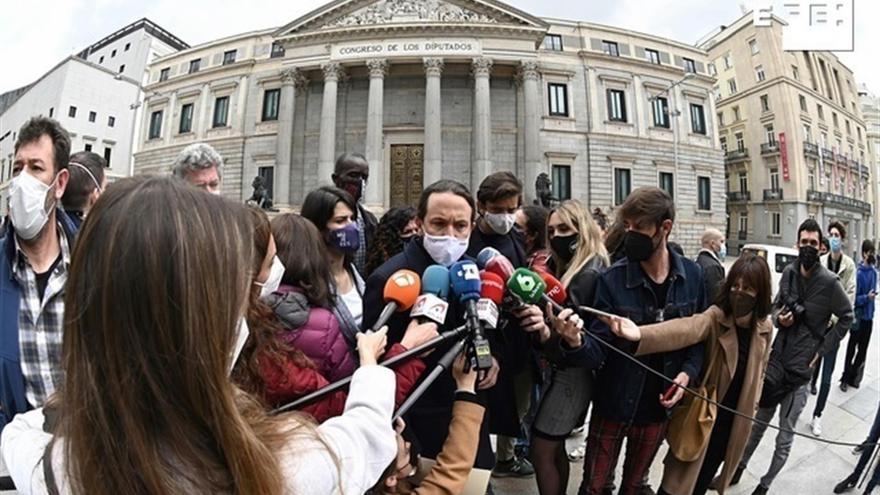 In the interview that ABC director Julián Quirós gave him on Tuesday, Santiago Abascal was very happy with one of his responses: "I'd rather have Iglesias call me a fascist than applaud me. I've already given him a headline." Nor is it that the phrase is to fall backwards. There were better ones in the interview. Neither Iglesias is going to applaud nor Abascal cares on a personal level what Iglesias says. Well the next day there was the headline on the cover from the newspaper. The same one that the Vox leader had proposed. And that comes from a party that made a public appeal less than three months ago, through Iván Espinosa de los Monteros, so that its voters convince ABC subscribers to unsubscribe. He also referred to the elderly ("if you know any elderly person who is still subscribed to the ABC," he said). It's hard to imagine a more embarrassing low blow from a match. But not even the directors of the newspapers are respected.

As with every campaign, there are days when politicians and journalists spend more time commenting on the hottest controversial issues than talking about the programs offered to voters. Lest readers and viewers receive information that may be useful to them when voting. Some politicians prefer to use the media as one of their favorite targets. That charms the hard core of voters, even if it doesn't arouse much interest from the undecided.

Complaining journalists in the campaign is a way of showing vulnerability or sometimes even despair. Pablo Casado's most embarrassing statements in the first month of the pandemic came when he complained that the media was "focusing on the positive." They weren't reflecting "what was going on in the morgues," it said. He made a face of not understanding. I wanted more photos of caskets on the covers. Any gloomy picture would have served him well.

Rather than regret, it is more practical to plant a message in the media and trust it to take root. The Madrid campaign has been the culmination of the strategy of the Government of Isabel Díaz Ayuso since the beginning of the pandemic, perhaps because it was preparing the electoral call for a long time and the motion of no confidence in Murcia gave it the excuse it needed. Faced with the terrible data on deaths in Madrid, she had to react by placing herself as the victim of a political and media conspiracy that had hidden that it was she who had saved Spain, for example with the decision to close the schools that we now know have not been massive centers of contagion. It is a way to fight back against any criticism you receive.

On the occasion of the threats to politicians, Ayuso has been disdainful of the journalists' questions, believing that they should not be given greater importance, even suggesting that they are related to the campaign by ensuring that they will most likely disappear as of June 5. of May. It is the opposite position to which his party had in 2012 when the threatened one was Esperanza Aguirre. But Ayuso's strategists know which messages benefit him and which ones don't.

Meanwhile, the PP is busy targeting its usual enemies. As he has done in the past, he has used totals of interviews in the program 'La Hora de la 1' cut in a way that seems partisan criticism. A question from the presenter to Mónica García in which she asked how he explained the support for Díaz Ayuso In the polls, taking into account the disastrous balance that the candidate made of her management, it was denounced as a direct attack on the president. The PP of Madrid and the party representative in the Council of RTVE.

Ayuso culminated on Wednesday his revenge against Telemadrid, the only autonomous public radio television that has its Government as its main enemy. The president longs for Aguirre's times, when an incisive question from a presenter or not repeating the hoaxes of the 11M conspiracy they were ostracized. The Government of Madrid has decided to personally take care of the television signal of the events of the May 2 party and take it away from Telemadrid, an unprecedented step in any other autonomy. Miguel Ángel Rodríguez will make sure that no annoying shot appears in the broadcast that will take place two days before the date of the elections.

This is also a campaign in which Pablo Iglesias has spoken both about journalism and about his party's program. Also, journalists love to ask him about that topic. Is in in an open war against Ana Rosa Quintana. He called her a "media spokesperson for the extreme right" in an interview. The presenter of Telecinco responded fiercely calling him a fascist. From then on, it will be difficult to consider yours to be an informational program, but here everyone has the right to have an opinion.

Iglesias has accused Quintana of lying for saying that he was responsible for managing the residences in the pandemic. It is true that the Minister of Health delegated to the then vice president coordination with the Autonomous Communities in this matter during the first state of alarm. That allowed for example the transfer of 300 million to the autonomies. Any journalist knows the difference between coordinating and commanding. The competencies they were always from the CCAA, and in fact all made decisions about residences without consulting the central government. If that had not been the case, Díaz Ayuso would not have been able to take them away from his counselor for Social Policies to hand them over to the Health Department. Neither the Ministry of Health could have ordered him not to be hospitalized sick elderly residents, even if they later backed off when the news broke.

The United We Can candidate has threatened to sue Quintana. You can now hire a good lawyer, because a false assignment of political responsibilities is not criminalized. That would be a tragedy for politicians.

The intensity has been transferred to the television sets, where almost comical scenes are seen. Let's see what happened in Cuatro. "I have never seen an electoral video of a political party pointing to journalists in the 46 years I have been," said Joaquín Prat, outraged by Podemos's criticism of some journalists. "Vox has done that with me last week, "Javier Ruiz replied later," and I have not seen anyone protest about this. "It is curious, but Vox's constant attacks on journalists never have as much echo in the media, not even when, as in the cited case of ABC, are little less than a call for the economic boycott of the newspaper.

In recent days, from the television and radio talk shows, journalists have sent all kinds of excited comments to the audience about the damage that extreme polarization is doing. Some only needed to shed a few tears. They are the same programs in which polarization is offered in its purest form with journalists defending the positions of their parties like soldiers.

It will be necessary to agree that the media offer a lot of information and a lot of noise in electoral campaigns. The second is quite negative, although it must be admitted that it is inherent in democracy in these times, even what is now called full democracy.