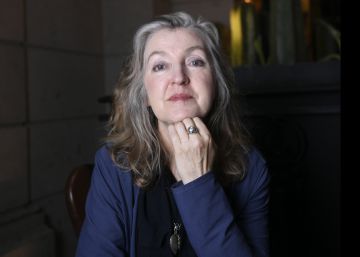 Nobel laureate Mario Vargas Llosa maintains that "it is probably in the intellectual field where there is greater mobilization in favor of this fight against inequality." In addition, he affirms, in an article published in this newspaper in mid-July that it turns out that it is "angry, disheveled and absurd" to propose parity in a literary contest such as the Guadalajara Biennial that bears his name, to achieve equality. If that were so, he says, “it would be enough that there was an identical numerical representation of men and women in all literary conferences so that equality had been achieved. What nonsense. The only acceptable criterion in this field is that of quality, not quantity ”.

Asked about this idea, the writer Rebecca Solnit does not raise her voice, only her two middle fingers, at the same time. There isn't much else to add, but she does it: "What a dinosaur." And then he will still argue that the Peruvian writer may not understand the discrimination that women suffer throughout the world. Also in the intellectual field. That is why those feminist protests against the III Vargas Llosa Biennial and some other invisibilities now crystallize in the most feminist book fair ever lived in Oaxaca. It is not difficult to bet on this field. For the first time, the FILO squad, which is held from today to October 27 is mostly female. And to top it off Solnit (San Francisco, 1961) is in charge, today, of the inaugural conference, under the title The power of voice, government policies.

But before, the writer, activist and editor has passed through Mexico City and talked to journalists. His big eyes seem to announce a clairvoyance of ideas. From his brain arose that of Men explain things to me, that later someone named as mansplaning. The environment, politics, art, nothing escapes the blue gaze of Solnit.

Talking about feminism in Mexico now is interesting and necessary. The country lives these days some long-claimed legislative chapters, such as the approval of abortion In some states such as Oaxaca, that venture a historical breakthrough in this field. There is also some openness in this regard in Argentina, with electoral promises in that regard. "I am excited by these latest laws," says Sonit and feels that everything is connected, also the advances in equal marriage, something that develops in a chapter of his flagship book Men explain things to me. For her that is an achievement of feminism too, for the struggle played "to transform a hierarchical relationship (that of traditional, heterosexual marriage) into an egalitarian one."

These interconnections between some things and others is what is now round the head of Solnit. "Now I refuse to think that everything goes separately, sexual violence, harassment, racist harassment, I think of the inferiority of women, in their lack of rights around the world, everything goes together," he says.

Mexico combines this triple condemnation for women, poverty, violence and discrimination. It is a country of very short steps, where women cannot walk through some streets or neighborhoods according to what time. Solnit wrote another of his great books, Wonderlust. A history of walking, something that women have not had easy, from long skirts to unpunished male violence. “That is what made me a young feminist, I could not walk where I wanted and wanted someone to agree with me and talk about it in a political way because the most basic freedom is that of movement; we need to be free and walk safely in life, participate in public life … But nobody had anything to say in the early eighties. They advised me to adapt to the violence of men, to aggressions, which were as inevitable as the weather. I refused and have written about it since then. ”

Feminism almost like leit motiv. Do you not sometimes feel that the matter occupies too much your life, that under that look you analyze everything? “You never overdo it with this. I am addicted to statistics and are alarming, violence against women by partners, which occurs between 15 and 44, harassment in their near world. All this is not exaggerated, it is extreme, all over the world men attack women. There is no reason to be a direct victim, it is happening to people like you. We must not fail to make it visible, ”says the writer.

The coffee maker rings at the Zócalo Central hotel bar in the Mexican capital. A large, good-sized silver heart hangs over Sonit's chest. Remember his visit to the Zapatistas and his conversation with Subcomandante Marcos, in 2007, "one of his literary inspirations." The writer has been listed as a "visionary." In a world plagued by gurus, how do you get that qualifier? “I hope nobody thinks I'm a guru, it's the last thing I would like to be. We understand the future by understanding the past. The future is dark {recalls Virginia Woolf}, nobody knows what will happen, but you can see the patterns and what happened in the past. I never prophesy about what can happen except what is possible to happen. Prophecy is nothing more than an analysis, ”he says.

Sometimes great analysis is not necessary, just observe the repeated reality. For example, those literary contests filled by male signatures against what the author of Esperanza rebels in the dark. "The only legitimate way to use a privilege is to distribute it widely," he says. “The privileges are between sexes, classes, races, but I think that a world in which women had the same voice, equal power, would be different and that is changing a lot, we have been changing it,” he says. When I think of the literature in which I grew up, all dominated by men, where they only existed as an ornament for men, were relegated, were mysterious, almost non-human and their entire existence conditioned by the relationship with the other sex … Now My sense of the world is very different, ”he says.

Solnit does not abandon his optimism. Look, for example, “the mountains, the rivers, the bridges every subway stop in New York, the literature, always centered on men, all named by men or from them… In New York there are five statues of women and 100 of men . But now they are throwing some and there is a first statue of a black woman and another in Los Angeles of Mexican braceros. Everything is changing and I hope so, there is a project on the way, despite everything. ”