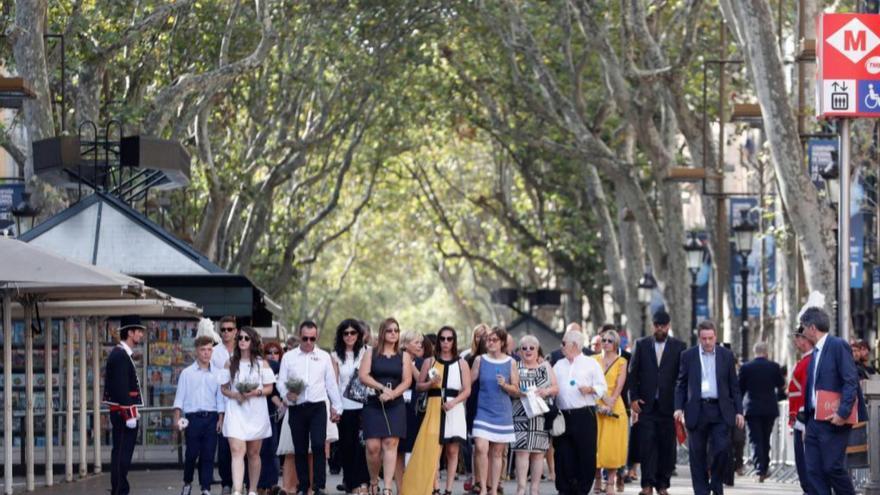 First victim of the attacks of August 17, 2017 on the Rambla in Barcelona who testifies before the court of the National High Court. The appearance was brief, but less than ten minutes have been enough for the court to enlighten itself about the trauma suffered by the victims on the day of the attacks and how the judicial process has meant reopening a wound that over time had been mitigated, that not closing. “I have not set foot on the Rambla since that day”, Judith R.

Already before starting, the president of the court, Félix Alfonso Guevara, has moved away for a moment from the firmness with which he has been taking the view and has allowed the victim to testify as a protected witness (no one has seen his face) so that he felt “protected”. Before the statement, the victim was “very nervous” and “crying” in the victims’ office established at the headquarters of the National Court of San Fernando de Henares (Madrid), explained Guevara, who has received the victim in a he loved “calm down.” “We will try to make it as brief as possible and not suffer more,” Guevara had previously asked the parties. At the end of his statement, in addition to the “may withdraw” with which Guevara dismisses the witnesses, the magistrate added: “Thank you very much for your statement.”

Asked by her lawyer (the victim claims compensation for the injuries she suffered), the woman explained that on August 17, 2017, she was on the Rambla just after leaving work. I was on my way home with a friend. While they waited for a traffic light to turn green, they saw the van that Younes Abouyaaqoub was driving – killed after five days of fleeing by the Mossos d’Esquadra – appear with which the terrorist killed 14 people on the Rambla and injured a hundred , including Judith R- and her friend. They did not have time to cross the street: “I heard a white van hitting a very strong acceleration. At that moment I did not realize that this van was coming towards us.”

Between sobs, the victim continued the story of what happened: she tried to push her and her friend as best she could, but the rear-view mirror of the van driven by Abouyaaqoub hit her companion and both fell to the ground. “I did not know more because people began to trample us. They were afraid and wanted to leave,” he said. Once he managed to stand up, he was “shocked” by what his eyes saw: “Too many people lying on the ground around me, and the van still zig-zagging, taking pedestrians down the Rambla”, he recalled .

The appearance of the woman has revealed the trauma of the victims and the reopening of the injuries caused by the trial, although your statement is a necessary requirement for the court to agree that you be compensated for the injuries you suffered. The complicated balance between revictimization and procedural guarantees has been shown starkly this Thursday, and will surely be repeated when the rest of the victims testify.

The sequels of Judith R. arrive today. “My life has completely changed, I am no longer what I was before. I didn’t have nerves, I was a healthy person, thank God, but since that happened … nerves.” The victim has detailed that he has needed medication after the attacks and also to psychologically face his statement in the trial three years later: “Little by little I had forgotten it, but here again I have relived it.”

In this Thursday’s session – the third of the trial – several Mossos d’Esquadra who participated in the investigation of the jihadist cell have also appeared. In line with what their bosses explained this Wednesday, the statement of the agents has served to give arguments to the thesis of the accusations and diminish the credibility of the defensive allegations of the three defendants, Mohamed Houli, Driss Pukabir and Saïd Bien Iazza, for whom the Prosecutor’s Office requests 41, 36 and 8 years in prison respectively.

The agents have once again emphasized that Houli was not collaborative with the investigation while they were questioning him in the hospital (the defendant was injured in the explosion of the Alcanar chalet where the spiritual leader of the cell, the imam of Ripoll Abdelbaki Es Satty, died ), contrary to what the young man alleged during the trial. They have also reported that they received threats from Oukabir when he was arrested. “If they put me back in jail for something that I have not done, I swear that I will kill the agents who have detained me,” explained the mossos Oukabir said when he was arrested in Ripoll after the attacks.

As he has been doing in all sessions, Judge Guevara has not allowed him to ask about the content of the statements of the defendants’ statements at the police station, which has led to a brief confrontation with one of the lawyers. Jaume Alonso-Cuevillas, JxCat deputy and lawyer for the former president of the Generalitat Carles Puigdemont, who in this trial represents the parents of the three-year-old boy who died in La Rambla. Cuevillas has tried to ask about the content of the minutes and after being scolded by the president of the court, he protested and thanked him for his “kindness.”

“The irony on the other hand, I warn you. I think I have not disrespected anyone, if you have asked me to speak up [los abogados tenían problemas con el audio de la sala de vistas] is why I am speaking out, but I am not answered that way. To me personally yes, to what I am representing, no. If now it is the fashion of not respecting the institutions, here they are respected “, the magistrate has settled.