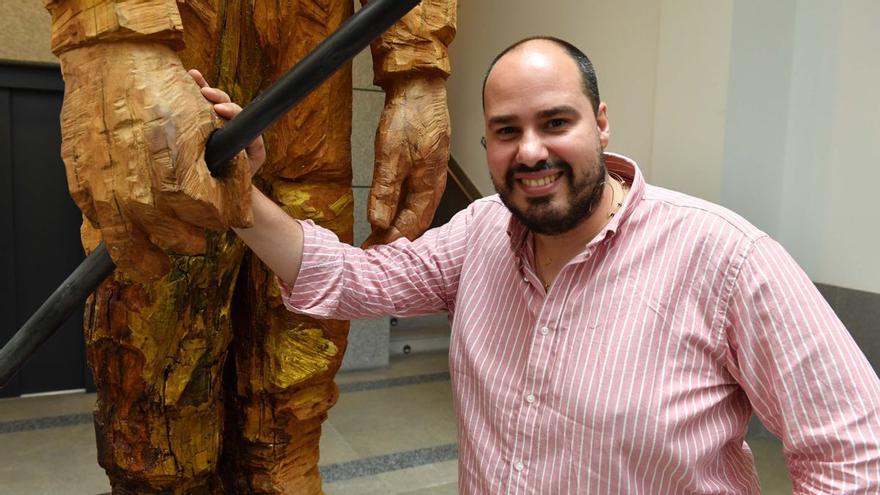 At only 25 years old, without knowing almost English and without prior training in dealing with conflicts, the journalist Antonio Pampliega he went to Iraq to fulfill his dream of becoming a war reporter. Thirteen years later, after having covered conflicts in Afghanistan, Somalia or South Sudan and being kidnapped by Al Qaeda for 299 days in Syria, has turned his career around. Follow in areas of war, but he is no longer interested in “the shots, the first line” of battle but “the stories” of those who live in these areas. His scale of values ​​took a 180 degree turn during the kidnapping and now he wants to make the youngest reflect, “about how lucky they are to have been born here”. For this reason, today he participates in the XII Congress What Really Matters that is held in A Coruña and where he will share the stage with Alejandro Gomez, Tuco, a businessman with Cancer and multiple sclerosis and that will explain his story of overcoming and Lola Fernandez-Ochoa that will promote the values ​​that sport contributes and “the importance of the family”.

What values ​​do you want to transmit to young people today with your story?

Especially empathy. We live in an overly individualistic world, where we think we are the center of the universe when we are not. But also the value of commitment, dreams and family. We do not pay the attention it deserves to the word family because you think your parents will always be there, but they are not and when you realize it is always too late. Something bad has to happen to us to realize all the good we had.

At first, when you go to a war zone, what you want is to be Pérez-Reverte, you go on an adventure, but once on the ground you realize that something else has to motivate you. In the end you understand that you enter the lives of other people who end up giving you their story because you sit with them, you listen to them. They, who live in desperate situations, many times want to vent and for you to transmit it. That is your job and it is a passion that can take its toll on you as it happened to me during the kidnapping. When you go out you think, is it worth it? But you realize that you are missing something, that you want to travel again, that you want to sit with people again and listen to those stories.

They don’t teach how to be a war reporter in college. How was your first time in a conflict zone?

I did not prepare, the teachers do not explain how this works, I did not even know that I was a freelancer. I went on an adventure a bit and that is exciting, but seen over time that Antonio would give him a slap because he did not know where he was getting himself: he hardly spoke English, he did not know the real situation in Iraq, he was not trained for what is to cover a war zone.

Does one get tanned on the spot?

Yes. The war journalist is not done in the faculties, it is done in the field. You can be the best in the classroom but you have to be prepared for what we see. In addition, Facebook groups are created on the networks where journalists help each other on which hotels or with whom to work in each area. You always try to work in the field with more people just in case.

Do you get used to fear and what you see in a war?

The problem with you getting used to working in war zones is that in the end you end up losing that sixth sense. If you go to war zones many times and lose your fear, you cross an invisible line which is what happened to me in 2015. I had been several times in Syria, in Afghanistan, you say ‘nothing has ever happened to me’, until what’s wrong. Why? Because you trust yourself and in this profession you cannot trust yourself because you pay for it.

Didn’t you think it could happen to you?

Yes, yes, when a person goes to a war zone they must assume that they may not return, because wars are what they are. You assume it and you go with all the consequences and if not, stay home.

I imagine there is a before and after to kidnapping. How was that change?

Yes, the Antonio of 2015 was more impulsive and the reports were the most important. Then things change, you no longer go with that need to go first, to go many times … They release me in May and in October the conquest of Mosul begins. I could have gone but I preferred to stay at home because it was not what he called me, I have already been many times in conflict zones, where there are shots. Now I have another scale of values, I care more about doing other types of more humanitarian and social reports, not so much shooting. I have been in conflict zones again, like Afghanistan, but not in the front line. I have been in the rear, telling stories of people who have much more to convey than soldiers who don’t even know what they are fighting for.

The kidnapping also made him value the family more.

Until something is taken away from you, you don’t realize its importance. In the 299 days of kidnapping one of my most important concerns was how my mother was doing, she has a heart problem. Imagine telling him that his son is kidnapped. You eat your head.

When cases like Roberto Fraile and David Beriain occur, does everything come to mind again?

Roberto was a great friend, we were together in Syria, we shared many moments, they hurt him and I was with him and we took him to Turkey. Not everything comes back to you, but you think ‘How many friends have I lost and you ask yourself again: is it worth it?’ I think it is worth it.

Are people anesthetized by the images of war or is there increasing awareness?

People are not aware, they have no idea what happens in wars because the media already think for them. The reality of what is there is not shown, the war is not just people shooting and fleeing. Why don’t we show parents crying over the corpses of their children or how doctors operate in war zones? I have seen operating with spoons to remove bullets and with car headlights. I am not in favor of showing people destroyed because it does not contribute anything, but the suffering of others. If we have lost empathy with that suffering, we can already become extinct, we have no meaning as a society. But for example, I have sent pieces from the hospital in Syria to London and they tell me ‘there is a lot of blood, we cannot put this in’. How do you not want there to be blood if it is a hospital and sometimes the blood reached our ankle?

During the current pandemic, this situation was sometimes compared to a war, it was spoken in warmongering terms. What do you think?

It all depends on the prism with which you see it. For a Spaniard, the pandemic has been like the atomic bomb, but a Syrian falls apart from us. Here we can go to the supermarket, leave the house and in Aleppo if you went to a bakery you would risk your life because the regime bombed bakeries, you crossed a street and you did not know if there was a sniper waiting. It is true that here PPE, beds, were missing, but only there I can only talk about my experience in Aleppo. The largest hospital there was, with eight floors, had neither material nor anything to treat patients, it was cared for on dirty floors. If it was urgent, he underwent surgery, that is, he was amputated, he was given morphine and he was sent in a taxi to a government hospital to be treated there. The pandemic is important because so many people have died, but it is incomparable.

At the very least, do you think rich countries have learned that they can also be vulnerable, or is this something that will be forgotten over time?

We have already forgotten, it has been of no use. Do you remember the images from May 8 to 9 in Madrid as if it were the end of the year? We have not learned anything. We are individualists, we think only of ourselves, not even your family because you go out to get drunk on May 8, you catch COVID and your mother dies of it and it doesn’t matter. Why? The fault, again, of the media. If you do not teach the consequence of COVID, they are not afraid, people believe that it is a lie. I did not work in a pandemic, but according to my colleagues it was easier to get into hospitals in a war zone than to get into one here.

He recorded a documentary for the A Coruña Red Cross about the pandemic. What surprised you the most?

I was surprised that I never thought about working in my country, how vulnerable we can be. It was a beautiful experience. Of the stories, the one that surprised me the most was that of Manuel who lived on the street and from one day to the next, he was as if he were alone in the city.

He assures that journalism has to do self-criticism. How do you see the future of the profession?

We co-responsible for war are going to become extinct, every time they bet less on us because we are very expensive. We live in a society where it seems that what matters are other things.

What do you know about Yemen or Syria? From Gaza and because they are all there. Without war correspondents the world is much more opaque and you can do whatever you want, and that’s when the bad guys win. If nobody knows what I’m doing …

What advice would you give a student of journalism who dreams of being a war correspondent?

That it is a long-distance race, where the fastest does not arrive but the one who endures the longest and who goes for the people, who does not do it for his ego or for the prizes … and that he enjoys it because it is an experience that changes your life forever.