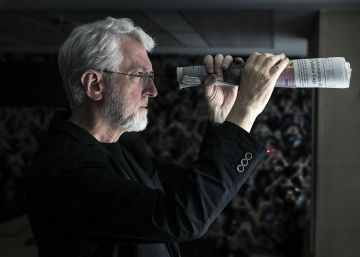 Professor Jeff Jarvis has one of the most unfortunate jobs in the world: guru of the future of journalism. The long crisis of the trade resists at the moment all kinds of prophecies. Jarvis, a professor at the City University of New York, nevertheless continues to suggest new ideas despite past failed predictions. His enthusiasm is contagious: the internet has changed everything, but there is still a demand for information.

We are still in a transition that may last a decade longer. In the United States, with more than 3,000 layoffs, this year is on its way to being the worst for journalists in a decade: and that between 2009 and 2017 the US newsrooms already lost 23% of their reporters. Jarvis, seen the seen, believes that it must be more radical. He spoke with EL PAÍS during his visit to Madrid for the meeting of the International Association of Media and Communication Research (IAMCR, in its acronym in English), which was held at the Faculty of Information Sciences of the Complutense.

Question. He has been trying for more than 10 years to guess what future journalism will be like.

Answer. I have not been successful.

P. In these 10 years there have been success stories: New York Times, Washington Post, Guardian. But smaller newspapers or countries or regions with smaller audiences continue to suffer.

R. They come from being fantastic businesses. In many cities of the United States they were monopolies. There were newspapers that in the year 2000 earned 40 million dollars only with classified ads. And poof, everything has disappeared. It is very difficult to dismember and recompose oneself. It's hard to give up something that you want to continue like this forever.

P. It has been trying for years to find solutions that fall apart.

R. Yes, he believed that hyperlocal blogs would be a pillar of the ecosystem of the future. But it is too difficult and risky. Journalists do not want to sell or run a business. I was wrong. It is not a pillar. There are also interesting non-profit journalism things: Texas Tribune, The City In New York, Propublica. It's exciting, but there's not enough funding to solve the whole problem.

P. The solution is a mystery, but the problem?

R. The evidence is clear: we have to change. There are many opportunities. While we see the internet as a threat, we are annoyed. If we look at the internet as the basis for changing our relationship with the public, there is a basis for something. Actually I think I have not been radical enough.

P. But it is the most radical.

R. I have not been radical enough with the future. So I think now: we have to rethink what is the use of journalism in a society, start to face problems and learn from other disciplines. If we are too polarized and communities do not understand each other, we have to build bridges. We also have to learn from anthropologists and ask them how to understand a community, how to listen to it, how to get evidence, how to connect. There is also an intelligence crisis: how can it be that 40% of Americans believe that Trump is worth it. We have to look at neuroscience. What does science say about people being deceived about their best interests?

P. Use a metaphor about a burning house. While burning, the industry must build a new home on another plot. But is not it more accurate to say that we are rebuilding the same house while burning?

R. Yes. Companies continue to depend on volume: paper ads, clicks, online programmatic advertising. They are locked in a cycle. They can not rebuild the burning house and at the same time be generating more flames.

P. Is it difficult to disengage?

R. We look at Google or Facebook, we see its scale and we want to be like them. We continue in the business of the masses. It is a fundamental problem. We have to learn to personalize, we have to learn value. We must rethink our economy around the variable valuable user. The Telegraph opted for a payment wall, the Guardian to have members, but both went through a process of content reduction. Before they went only to produce page views.

P. The problem is where to cut.

R. One, stop rewriting the others. Be unique. Do not make cheap, common news. Some you must do, but do not spend money on that. Two, look for value. What is valuable in the lives of people? What can I do that they are really going to use? That includes investigative journalism, including acting as power watchers. But I'm not talking about offering just journalism. I have a unique position in the market. A Seattle newspaper is rewarding journalists for how many subscriptions their articles get. It will not work either. Because, first, it happens only once. Two, it's one more metric, but is there anything that causes retention? We need new metrics on value. You have to invent something new.

R. It can no longer be the only reward. You have to offer access to members of a community, contacts with journalists, events, discounts, education.

P. It is easy to imagine journalists reading this and thinking how complicated.

R. It is. But with a wall of payment limits conversion, you separate your readers. Those who love you very much will pay. But you limit your influence.

P. Are the walls of payment not a salvation?

R. We deceive ourselves if we believe they are salvation. We always wait for the next messiah: tablets, programmatic advertising, payment walls. I just saw a study from the Reuters Institute in Oxford and found that half of digital subscription payments go to three brands: New York Times, Washington Post Y Wall Street Journal. So if you are the Cleveland Plain Dealer, it's going to be a challenge to get ahead: you do not have the same audience or scope, the same reader-subscriber conversion, you can not charge the same, you're going to lose more subscribers because you're not so valuable. The walls will not save you.

P. Some brands will be saved.

R. I work with Guardian, He has chosen not to make a wall so that his journalism would be available to everyone, with which I agree. I work with them in their membership program. Immediately we realized that I was not going to members, but to beg. And begging works.

R. It works in the United States and somewhat less in the United Kingdom. There are opportunities for a media company to get money from the consumer. That does not necessarily mean a wall. Many people give money to Guardian and they do not enter regularly, but they are concerned about the environment. Because the Guardian does not create an environmental movement? They have a community opportunity: not belonging to Guardian but to the club. We have to look for new affinities. People are there not only because they like our brand. I know it's hard.

P. The reputation of the media it is low. Maybe journalism should stop doing it someone called a journalist?

R. We have a different role. It is no longer just producing content. You have to think about what to do with society. My advice is to be brave and try new crazy ideas.

P. What is your option now?

R. A strategy based on the relationship with communities. We need to expand the definition of community. When I ask my social journalism students in New York what communities they are members of, they start with truisms: I live in Queens, I'm a student. Then someone in the class says: 'I have mental health problems.' Boom, change the discussion. There is another that says it and, suddenly, there is a connection. It is a small community. We have to expand the concept of community beyond the obvious of geography and demography. A community is not millennials, but cat owners or young parents. There are not many new news about baby poop or diapers, but why can not we offer you a map of your walkable city?

P. But does that scale? Does it work for great newsrooms?

R. I always hear that it does not scale. We are going to work with diabetics in Madrid. Let's do it well. Let's learn to do it, and we can repeat it for many other communities. I do not think it was done in newspapers. I want to see him.

P. It may be another unsuccessful invention.

R. Clear. It remains unproven. There is a small company, Spaceship Media, which currently operates in a couple of cities. Can grow up? Maybe

P. Can some media think they have the option to go and pray money to powerful people?

R. And give it to them and tell them: behave yourself. Is not that what has happened in the last 15 years in so many countries in Europe? It is something that damages your reputation. Out of desperation they go to the source of the money. It also happens with local newspapers in the United States. It is a matter of scale.

R. It's complicated. I always use the Gutenberg trick. He introduced the printing press in 1450. But the first newspaper is 1605. Something that we now see as obvious took a century and a half. And the first newspapers failed because they had no business model. So now we are like in 1475. In the first days. The case of Guardian it is fascinating. They had 1,000 million in the bank, they were calm until they told them: at the current rate of spending they last you eight years. That motivated them. Now they do not lose money, but they still suffer. It motivated them to see a certain death date.

P. But they still suffer.

R. Forever. But they just need to survive.