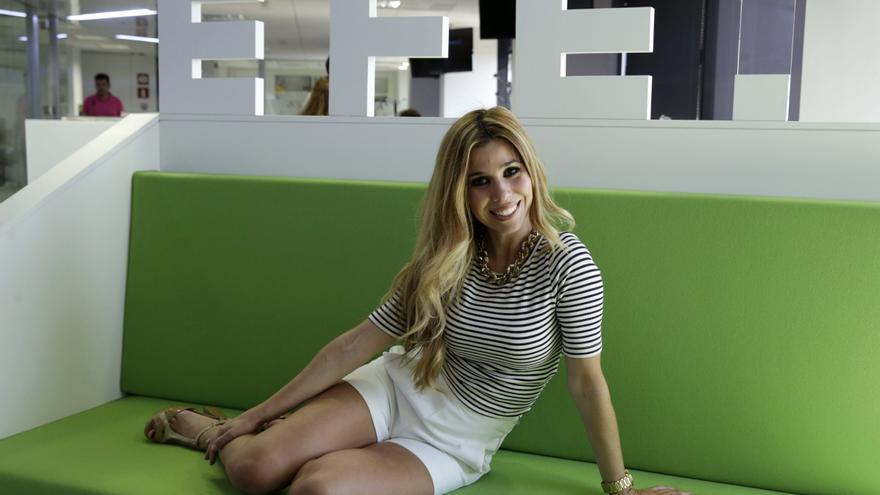 Madrid, Aug 9 (EFE) .- Natalia, former participant of “OT 1”, the pandemic left her in “shock”, unemployed and single (“The maximum I had been in my life was 6 months”, she says), But with professional help, she learned to think about the present and “Slow”, as her return to music is called, for the first time with her friend Chenoa.

In this song, in which she looks at Latin rhythms, the interpreter and composer from Cádiz speaks of an old-fashioned flirtation (“What I like is courtship,” he acknowledges Efe in a talk), in contrast with the panorama of ephemeral and urgent relationships in social networks that he claims to have found after his last relationship broke up months ago.

“I did not know what it was to be in the market. I have been with a boyfriend all my life. Now I have discovered how the world of love moves and I do not like it. Everything goes very fast,” says Natalia Rodríguez (Sanlúcar de Barrameda , 1982).

According to her, “the same thing happens in music.” “Everything is throwaway. And feelings are forgotten, deepening, knowing and enduring. We are in a society in which we cannot endure things because there is too much variety. And it makes me sad,” he insists.

Gone are the hardest days of the pandemic, which surprised her in the US studying English. “Within two weeks, more than 600 people died in Spain, there were no planes to return, I broke up with my partner and everything got mixed up,” he says.

“I am quite a strong person and I took refuge in sports. I did not let grief invade me, although in the end I needed help. I say it openly: it is not bad to go to a professional who opens your mind, because we enter a loop and we don’t know how to move forward, “he confesses.

In those sessions he understood that “he always lived idealizing the future” and that he had to be more in the present tense. “Now I feel happier and they tell me that I have more light,” he boasts.

The pandemic had also broken a “boom” that not even she expected, when at the beginning of 2020 she was vindicated by one of the youngest stars of the “Operación Triunfo” quarry, Amaia Romero, who decided to cover “You’re going to drive me crazy “at their concerts.

“Suddenly it was ‘trending topic’ without knowing why,” recalls the artist, who ended up appearing by surprise in one of those “shows.” “That the new generations sing a song of mine makes me feel older, but at the same time very proud,” she says.

He states that in the past there was a time when he got “a bit of a mania” on this issue. “To this day they continue to sing it to me in the street, but I think it’s cool that they recognize you for a song. It will happen to Chenoa with ‘When you go’ and to Bisbal with ‘Bulería’. Having your song is milk and I’m wanting to sing it everywhere, “he says.

Between one thing and another, I had not launched material on the market for two years. “I was walking up the walls,” he acknowledges, before explaining that, in a panorama without concerts with which to make the recordings profitable, for an artist who publishes herself, producing new music as she has done now is above all a “wink” to his followers.

“When I left OT at 18, I thought I was going to eat the world. They take you to record with Britney Spears producers, all very exorbitant. But then the numbers are no longer the same. The audience changed and so did my relationship with the band. music. I was the first in Spain to release single by single and I opted to adapt my personal style to what I wear, but without losing my essence, “he explains.

Under this premise, “Lento” was born, a consciously summery theme in which he mixes “dance” with Latin music, an r & b start (“What is my sign”, he points out) and “even bachata”.

In his development, he came across a verse that he resisted, so he asked his ex-partner Chenoa for help. Together they found the formula and, once it was recorded in Mallorca, Natalia invited her to join the song’s bridge vocally.

“Our voices are very different, perhaps if it had been a ballad like the one he did with Soraya … But this is in a completely different style from his,” he argues about the reasons why the song is raised as a “collaboration”. and not as a “duo”, as his followers claimed.

In his head he plays with the idea of ​​an upcoming EP, but while he decides he already has another more urban song for after the summer. Before that, he will play at concerts such as the festivities in his host town, Majadahonda (Madrid), on September 13.

Tags: discovered, do not, I have, like, love, move, Natalie, ot1, World