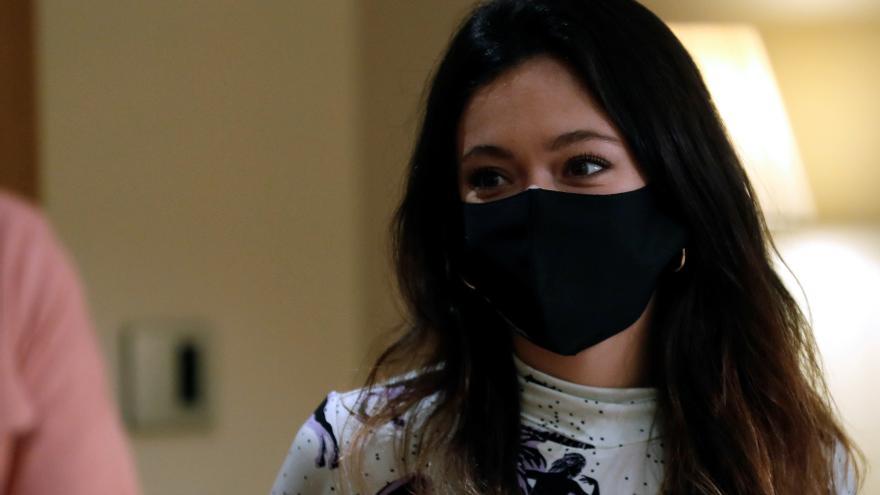 Tudela (Navarra), May 14 (EFE) .- Since winning the Goya for "El olivo" (2016) Anna Castillo has not stopped working. The Catalan actress has presented in the conference 'What comes' of Tudela "Life was that" by David Martín Santos, but has shot four more films in the last year, after the break in confinement in 2020.

From that time he highlights that he lived it with great anxiety: "I had a bad time of the quarantine, but it is curious because now I remember it with nostalgia and affection". And he says that, together with his partner, they recorded a daily video to record those strange moments.

In "Life Was That", which will hit theaters at the end of August and will have a lot to do with the next awards season, Castillo is Petra Martínez's accomplice. They are Verónica and María, two women of different generations and immigrants who meet in a hospital room in Belgium, a meeting from which a friendship and an "exchange of wisdom" emerge.

QUESTION.- What attracted you to this project, a debut film?

ANSWER.- In the raw operas the decisive thing is that a script moves you and that happened to me, in the first films there is usually a special affection and sensitivity and the fact that it was shot in Belgium and in Cabo de Gata (Almería) It seduced me a lot at the photography level, it seemed an interesting contrast to me.

Q.- Could it be said that it is a film of contrasts in essence, due to its opposite characters?

A.- It is a crossroads between a woman at a time in her life that does not bring her great happiness and another with a great desire to live and this meeting creates a kind of contagion that starts a journey.

Q.- You also speak of friendship between people of distant generations.

R.- And of exchange of wisdom. Vero, my character, has a very free and vital wisdom and that makes something wake up in Maria, while Maria offers Veronica care, Maria is uprooted, she is free and strong and happy but she is alone and to find someone to help her. care and who to care is learning.

Q.- The issue of care and who it concerns is a hot topic since women have freed themselves from the exclusive, what do you think?

R.- That is a lie. My grandmother's generation is that of María in the film, the woman who is at home to care for the children and the husband, and my mother is told the idea that to be an empowered woman you have to go out to work, but in In reality, the one who ends up taking care of things at home is also her.

I have a very fat hangover from my previous generations to get rid of this mental burden that involves covering all responsibilities, you have to do a deconstruction and a job and my generation is deconstructing, imagine that of my mother and my grandmother.

Q.- Your character is part of the 15-M generation, the indignant ones, how do you see the situation of the young people around you today?

A.- I do not think I am the best person to talk about this, I live a somewhat special reality, I have colleagues who fight a lot and others are lucky enough to work like me, but I see a little this feeling that they sold you the motorcycle and then they have not given you anything, in all the jobs, there is uneasiness and a lack of hope, buying a house is something that is far away now or living in the rental center.

Q.- You have said that during the confinement you recorded a daily video, what was it about?

R.- My girl and I at home, we recorded ourselves with a small camera, from the 90s, we have many images but they are not edited, I hope to do it one day ... It's funny, I had a bad time in quarantine, with anxiety and now I remember it with a certain nostalgia and affection ...

It was a daily video, sometimes we talked, other times we recorded ourselves playing cards, napping, cooking, doing sports ... what the whole world did, other times if you had a wine you were more fun ... to have a memory of that moment, it is curious to live something like that.

Q.- However, after the break, you have chained shootings, with Jaime Rosales ("Wild Sunflowers"), with Cesc Gay ("Stories not to tell"), with Marcel Barrena and Dani Rovira the film about the Open Arms ("Mediterranean" ) and a comedy by Paco Caballero ("Where two fit").

R.- Now I stop, especially to be able to release them. This is so, you have times when you sow a lot, others are quieter.

Q.- Looking at your resume, it would be said that you have a fondness for social cinema.

A.- Yes, it is the type of cinema that I like to make, talk about realities that are not mine, give them a voice, but you cannot live only from social cinema, you have to live with everything.

Q.- How did you know that you wanted to be an actress? What were your references?

A.- Since I was little, what most amused me was inventing myself to be other people. I told my mother that I wanted to be an alcoholic when I grew up or a prostitute and my mother told me 'you still want to be an actress'. What I saw in the movies fascinated me, it made me feel like a motorcycle, going to the movies has always been my source of dreams.

As for actresses, I have grown up with the romantic comedies of the 90s, my base references were Nicole Kidman, Sandra Bullock and Julia Roberts.