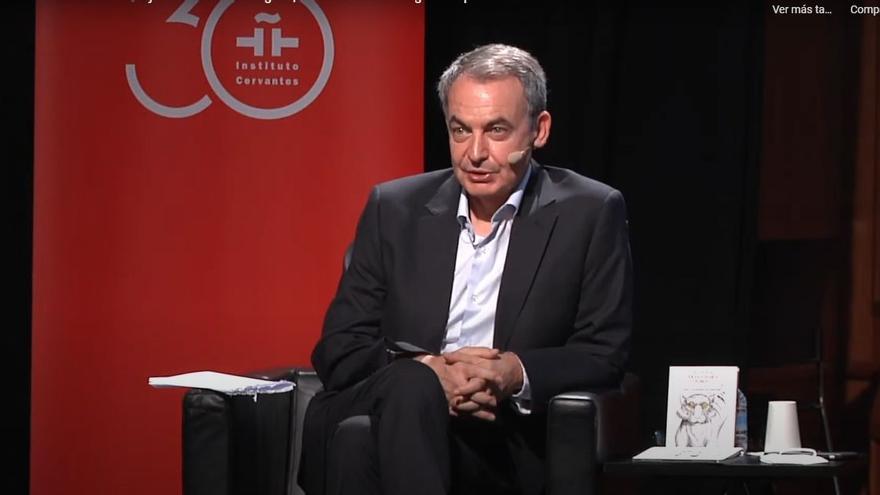 José Luis Rodríguez Zapatero has written a literature book. For the former president of the socialist government between 2004 and 2011, the exercise has given a bit of a cut. “I feel like an intruder,” he apologized this afternoon at the presentation of ‘I’m not going to betray Borges’ (Editorial Huso), where he reflects on the work of the Argentine author and professes his admiration for him.

The presentation ceremony was held at the Madrid headquarters of the Cervantes Institute, in an almost family atmosphere, with an audience of about 80 people, including the Minister of Culture, Miquel Iceta, and the Argentine ambassador, Ricardo Alfonsín. Zapatero spoke with the director of Cervantes, Luis García Montero, “an upright poet”, after being introduced by the person in charge of culture in his cabinet during his time in Moncloa, the philosopher Marifé Santiago Bolaños. “My fairy godmother of literature,” praised the socialist politician, who quickly began to read Borgesian fragments. From the start of El Aleph, he enthusiastically repeated his favorite phrases: “Hot tomorrow, imperious agony, incessant and vast universe, melancholic vanity,” he sighed, almost justifying himself: “I don’t know if you feel what I feel.”

Zapatero believes that love underlies all Borgian scholarship. “It is what was the last foundation of his life”, and again alluded to the best-known work of the Argentine: “The Aleph contains the universe, but what survives is Beatriz Viterbo”.

Borges’s marked conservatism and some of his more controversial political views never made a dent in Zapatero’s love for Borges. If he justified Pinochet, it was because he was an anti-Peronist, he interprets. The derogatory comments about Lorca, a slip. “No one can accuse him of having imparted a doctrine […] He is not a political man, he was not passionate about ideologies, “said the former socialist leader, who took the opportunity to elaborate on his own conception of politics as a debate without bland approaches.” He has not posed a contradiction to me […] It is part of the intellectual openness; sectarianism is incompatible with the left and with being a good democrat, “he said, relying on the opinion of another literary reference, this one very left-wing:” Saramago said he was a great humanist. ”

More relaxed as the act progressed, Zapatero allowed himself “the audacity” to compare Borges with Bach, and recommended resorting to both as a recipe for the vicissitudes of life. He admitted, causing laughter in the public: “Those who know me know my limitations; I came to Bach through Sonsoles”, referring to his wife, Sonsoles Espinosa. Later, he suggested that in poems such as ‘Heraclitus’, ‘Las causa’ or ‘El tiempo’, Borges makes “a motion to censor the novel”, a phrase that led García Montero to clear his throat a bit. “I wouldn’t dare say that,” he replied.

“Borges matters so much in my life that Argentina is the country that I like the most after Spain,” joked the former president, who insisted on the need to “refute ethnocentrism and recognize what lies beyond the Atlantic.” He also commented, sympathetic, that the teacher did not find Spanish letters too funny. “Just save Quevedo, I don’t know if because of his condition as an Argentine.” García Montero closed the event with another compliment: “For a president of the government to make a declaration of love for literature, we have to thank him.”