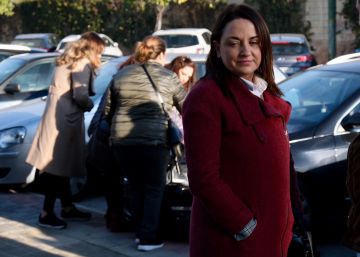 “I do not want the three teachers who vexed my daughter to be close to children,” said the mother of the five-year-old autistic girl who told three journalists at the Dos Hermanas public school last summer (Sevilla) in which she was enrolled for an alleged crime of degrading treatment and another of continued violence against the child, diagnosed with autism spectrum syndrome. This Monday the parent, Rocío Rodríguez, has testified in the courts of that Sevillian town for the complaint that the three teachers filed against her in November 2019 after a Facebook group was created –with the name #YosoyValeria– in which he published comments that, according to the complainants, threaten his privacy. “All I have done is so that what happened to my daughter does not happen again to another child,” “Rodriguez said after his statement before the judge in a case that is still under investigation. Likewise, the complaint that She presented against teachers also remains stagnant in that phase.

Rodriguez opened the #YosoyValeria profile last July after placing a camera in her daughter’s backpack and finding that the educators –the tutor of the special education classroom, the monitor and the speech therapist at CEIP Cervantes– they were addressing the child “in a derogatory tone, mocking her and shouting at her“with comments like “There you stay, will I hit you?” Or “It’s already trastocao”(Teachers recognized themselves in audios and did not oppose transcripts).

It was the anomalous behavior of the little girl, with two seizures almost followed and excessively nervous, which led the parents to record what was happening in class. Rodriguez shared part of the audios in the #YosoyValeria profile and were commented by a good part of its 6,000 members.

In that group, the mother warned that one of the three teachers – who dropped out when they were reported – was going to join as an interim in another center of the Sevillian town of Mairena del Alcor at the beginning of the new school year. “If you know parents from that school, please, I just want them to be warned.” The message included the audios with the vexations of the teachers and the resolution of the Board with the appointment of the teacher, her position, center of destination and duration. The publication generated a stir and the educator unsubscribed again.

That circumstance motivated the teachers’ subsequent complaint against the mother, which states that their current situation is “unsustainable”, because “they are affected in their health and in their social and professional life.” “What I have done is to protect the children, this has to end,” Rodriguez insisted this morning. “I want a measure to be taken so that they are not with children, allowing them to perform administrative work, but not close to children,” he insisted. His lawyer, Javier Jaenes, has stressed that the administrative and legal actions taken by his defender and Facebook’s own profile are not intended to “attack the three teachers, but to preserve the education system.” “Parents should know what teachers their children have. Nobody wants people who are not prepared and without vocation to take care of them, ”he added.

“This process is very dangerous because the fact that teachers have denounced the mother, discourages other families from reporting harmful behaviors of teachers towards their children,” warns Katy Herrero, a member of the Antonio Guerrero Foundation, who has been advising a Rocío from the beginning of the process. Blacksmith speaks as he rolls up a pink banner in support of this mother, who has raised a quarantine of parents of children with special needs and members of the foundation in a silent concentration at the doors of the courts this morning. “It cannot be that the victims end up becoming guilty,” he says.

The behavior of the three educators unleashed a great indignation among the public opinion and caused the immediate performance of the services of the Inspection of the Ministry of Education. Its owner, Javier Imbroda, said then that he did not want “that professionals like these were in the system.” The General Director of Human Resources of the Ministry, Juan Carlos Aunión, warned that from his department the necessary measures would be taken to prevent the three teachers from returning to teaching. However, one of them presented himself to the opposition on the same day that he had to go to testify to the courts for the case of the autistic girl, and, subsequently, being in the interim bag he was awarded the place in Mairena del Alcor Currently, as confirmed by Antonio Guerrero, president of the foundation that bears his name, that same teacher is teaching in a center of Seville capital.

The Junta de Andalucía initiated a sanctioning procedure against the three educators who are paralyzed by the opening of the judicial process against them, which the family of the autistic girl filed on May 31. It is to this circumstance that the counseling appeals to justify that no precautionary measures have been imposed against teachers, as claimed by Rocío and the Antonio Guerrero Foundation. “You can not adopt the temporary suspension of teachers because we currently do not have legal mechanisms,” they explain to this newspaper from the Ministry of Education. “When there is a judicial ruling, the administrative route and the measures allowed by the regulations will be activated,” they state. .

Regarding the situation of the teacher investigated for the alleged mistreatment of the autistic girl and who has returned to teaching, from Education they say that “the inspector of Seville is aware of the situation permanently, ensuring that in the classroom always be another teacher ”and explain that the low coverage is that of a Therapeutic Pedagogy teacher and works in an ordinary classroom.

His lawyer has declined to make statements about it. The parents of the child have requested that the investigation be extended for a crime of physical abuse and that a coroner be allowed to examine the girl to determine the possible consequences that she may have suffered due to the abuse she suffered at the center. The requesting judge has refused both requests and the decision has been appealed by the family.