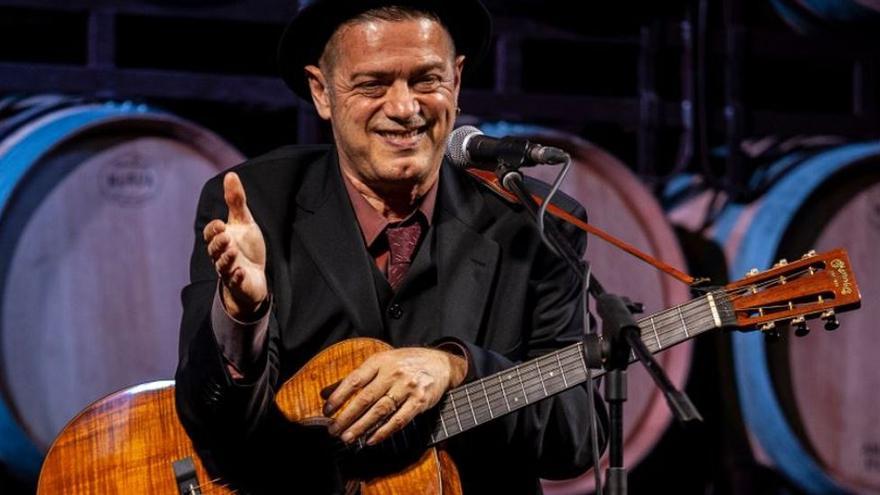 It is a jazz album full of son, bolero, corrido, bossa and rock. Do you already play rock in that league of old and seminal music?

It is the league of musics that the past contemplates. What can still be called recent rock is stagnant except for “peripheral” productions, which are produced from the Far East to Africa, where experimental rock is mixed with music from there. In the Iberian Peninsula we have to offer the products of our sound garden. And that is what we are doing, in synthesizing the things that come from outside with the verse sung in one of our languages ​​and giving it back with the awareness that we can dialogue at the international level.

Have we understood our privilege as a meeting point and musical collision?

Let’s say that the political burdens of the Hispanic mosaic do not allow us to enjoy our cultural richness in a relaxed way, which is both in the local qualities of the verse and the sound and in the tapestry that can be formed between all of us. Politics is a drag because it always encourages territorial conflicts. A burden that musicians and artists must free ourselves from.

You have always looked more to the Atlantic than to the South, for example. Why?

It is a force of destiny that conditions this perspective. If you are not born in the pot of a genre as identified as flamenco, you do not achieve the right flavor. It is preferable to get closer to the fibers that touch your heart since childhood and propose encounters. My particular fiber is that of black American and Afro-Latin music in general, rock’n’roll and soul and their drifts.

Juan Perro’s band has something of a verbena orchestra.

Yes, and it is deliberate. In production we were looking for the most natural sound possible. And we like that aesthetic of the border cabaret orchestra that can go from the southern United States and Mexico to interwar Berlin. For me, popular music is a laboratory for creation. We want it to be a select entertainment, which awakens refined emotions and ideas that are projected forward. We believe in a popular festival that can stir emotions and thoughts.

Do you vindicate popular and old music as a defense or as an attack?

As resistance of memory and as a projection towards the future. There is no living imagination if it is not based on a substantial memory. And only on the basis of a rich memory can one dare to imagine novel sound forms. That is why respect for the traditions in which one still perceives a sound embers is so important.

Has this vindication made you a marginal artist?

Yes, in a sense it is a marginality chosen since we unmade Radio Futura.

What do you long for the “mainstream”?

I miss that there are channels that allow you to fight for the search to reach a certain degree of popularity. Today televisions are closed for music creation, they only work with classified and pre-made music, food prepared without a high creative level. And most people are content with that. Our role, from a certain respectable marginality, is to keep looking.

You were already searching on Radio Futura and you were on TV a lot. When was the invention screwed up?

When televisions and large radios realized that they could control the entire business, generate the product and exploit the market according to their criteria. That leaves no room for creativity. That is why creativity must be fought from the margins. I do it in a deliberate, chosen way and I want to be consistent with that decision no matter how much it costs me. It is an interesting and fun fight.

What does the Auserón Philosophy student contribute to Juan Perro?

A territory in which the musical search is allied with a more general vision of the role of music in society and as a substantial part of human thought and consciousness. Philosophical reading and writing sketches provide me with a space for reflection that allows me to see things with greater perspective.

And the artist to the philosopher?

Some concrete materials for reflection. You may be inclined to abstract thinking, but if you don’t have specific content to base yourself on, that thought is in the air.

We have a new Minister of Culture who dances quite well to Queen. Do we keep hope?

Unfortunately I cannot have much hope in relation to party politics. But neither can we fall into total hopelessness. Let’s say that we cannot trust that the cultural richness of our country is linked to politics. We have to do it ourselves.

Will the culture that we do not make will be made against us?

If you don’t stay alert, it ends up being that way. “Professional politics” is a vision of politics. But for me, the work of each one, the daily life, the home and the interpersonal relationships of each one are political. That is the real means of building citizenship and society. Politics is our job and music is itself a political fact. You don’t have to wait four years to experience political reality as something hopeful, and you can’t live something hopeful if you limit yourself to waiting for the parties and generalist politics to become culture. We fear culture that we must generate.

You have been going to Cuba for 35 years. Do you understand the current protests?

Cuban society is flexible but it is in an extreme degree of lack. There is a lack of food every day and a lack of fuel… I have been witnessing what has been happening for years with great concern. It is logical that a large part of Cubans want to preserve the heritage of the revolution, because it has cost a lot to be independent from the imperialist contagion of the United States. But, at the same time, we must expect from the regime a degree of openness that does not leave out the new generations who want more freedom. The response in Cuba may be fueled by the effects of the blockade and foreign operations, but the regime can no longer justify itself in that for mere continuity.

I would not like to say goodbye without transmitting to you the silly illusion that has always made me that one of my favorite live shows, the “Escueladecalor”, was recorded in Valencia.

I remember those days with intensity. They were memorable days. I remember the audience at the Arena Auditorium whistling “Sitting on the Bay Pier” with a loud noise that filled everything. The Valencian public was very musical and very aware of having remained at the forefront for two decades.

What do you think this musical avant-garde from Valencia in the 80’s was due to?

That there was a continuity from the musical culture that is born from the villages, with the training of children in local bands, to the restlessness of the DJs who went to find music in London to be up to date. There was a real musical fabric and I trust there still is.