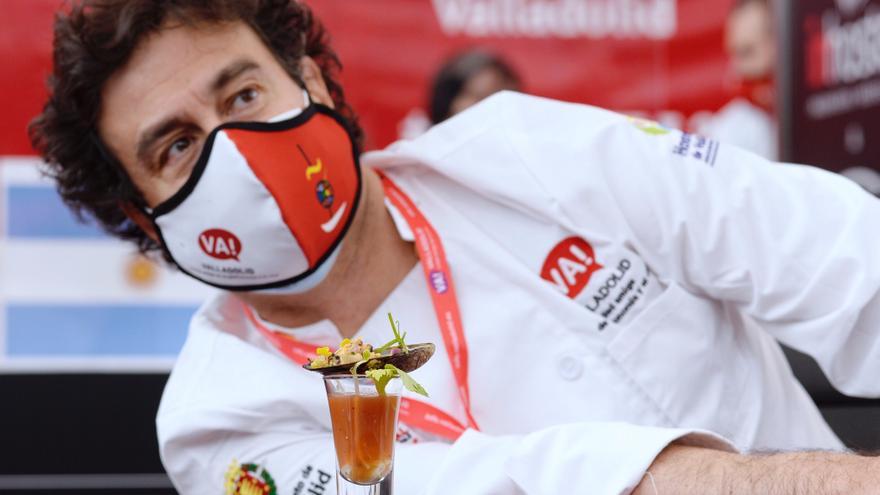 Madrid, Apr 25 (EFE) .- From the age of 22 in the kitchen of El Bohío (Illescas, Toledo), which he transformed from an inn to a Michelin star, and since 2013 a jury of “MasterChef”, Pepe Rodríguez Rey had the bar as a university From a bar, he fell in love with his job because “the touch makes love” and he declares himself “more and more Taliban in La Mancha cuisine.”

Born in Illescas in 1968, he belongs to a generation in which children dreamed of being rockers or footballers, not cooks like those who appear on his television program and who are pursued as new idols in search of the photo.

He grew up in El Bohío, founded by his grandmother, inherited by his parents and later by him and his brother Diego, who transformed a food house into a restaurant where La Mancha cuisine is sophisticated without losing its essence. He has fought for haute cuisine and defends it, although “unfortunately it is a minority”.

Learning about something requires dedication and practice, the chef from La Mancha reflects in an interview with Efe: “And yes, we lack practice in haute cuisine; one knows how to eat a shrimp and a steak, but if you explain a morteruelo broth with smoked sardines, a dish with a thought behind it … It is still cooking, but perhaps it should be told in a more natural and simple way “.

“At ‘MasterChef’ we socialize her to bring her closer to more people,” says who acknowledges that she has won new customers thanks to the program who “understand that it is worth coming to these restaurants.”

He did not hear the call from the kitchen. He entered out of obligation and ended up falling in love because “touch makes love”, he jokes. “You get to know her, seeing what she gives me and what I give her, knowing that every day I can do something new … The challenges become greater the more you learn and I want to learn the more, the better; thus a special love is created “.

Before, El Bohío’s bar was his “undergraduate, graduate and master’s degree.” He learned when to speak, shut up or smile, when to be simpler or more elegant … “The good records in life,” he says satisfied.

With that background he assumed the reins of the inn, to which he gave new airs in “a logical evolutionary process: my mother improved what hers had already improved; you have to know what you like to eat and how to make a 21st century inn. El Bohío He doesn’t have that innkeeper look anymore, but he’s still on the road. ”

His brother Diego left that task a few years ago, a separation “more than painful, painful”, but after which both are “happy”. Now Pepe Rodríguez takes him where he wants, “without having to reach a consensus; sometimes when only one thinks it is much better.”

That solo path leads him to be “more and more Taliban of La Mancha cuisine” and, he defends, “if we have clients who come four times a year, we will be doing something right.”

He assures that he has come out “graceful” from his versions of popular tradition such as cocido pringá or garlic soup, dishes that are “brand of the house”. Knowing how to take advantage of the taste memory, the most recognizable by all, dressing its succulence of elegance in creations such as stewed wheat with dewlap and mushrooms, peas with atascaburras and sausage or Iberian pork manchego gazpachos are his recipe for success, deserving of a Michelin star since 1999.

“Appreciating a good chilli crab is a thing of the most traveled,” he adds.

Within the “chaos suffered by the hotel family” due to the pandemic, he is happy with the situation in El Bohío, which has only been able to open six months in the last year. “But we have worked them wonderfully, with great enthusiasm, great joy. We are a better team and I am happy,” he says.

What he learned in the crisis of 2008 has served him well, when he admits that he had a bad time. “I said to myself: something like this can’t catch me with a changed foot, so the pandemic has taken me quite well socially, physically and economically because I already managed well from behind. A cook can be very talented and not know numbers, but you have to have someone with that. They should teach more management than cooking. ”

He admits as the only positive thing about this tragedy having enjoyed more time with his wife and children and to reconsider and realize that “everything is ephemeral.” “I am a privileged person, I live from the restaurant, I have another series of businesses (such as consultancies or their line of Paellíssimo rice kits) and luckily I do television”.

He entered that environment “by lung, learning as he went”, as he did in El Bohío, and defends that being an entertainment program with the kitchen as the common thread “there must be fun, I cry, empathy, laughter, hate. .. It is life itself, a mirror of society “.

About to start recording a new edition of the “celebrity” version, which will feature, among others, the actors Victoria Abril, Belén López and Iván Sánchez, the sports commentator Juanma Castaño and the singer Yotuel Romero, jokes: “Now I am scared”.