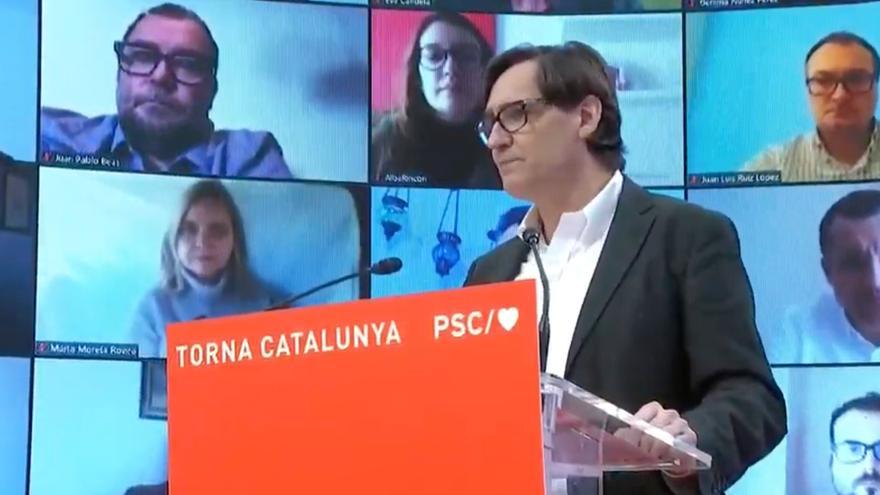 The PSC candidate for the Generalitat, Minister Salvador Illa, has defended a Catalonia “without sides or blocs” that will overcome “intolerant fanaticism”, put an end to the “crisis of coexistence” and recover its “strength” and “unity” : “I am here to work for the reunion of the Catalans and the Catalans”.

In his first pre-campaign act as a socialist candidate for the presidency of the Generalitat, in which the leader of the PSC, Miquel Iceta, also participated, Illa has claimed that his training “is in good shape” to win the elections.

“Everyone knows, although many cannot say it, that the only solution for Catalonia is to have a socialist president in Moncloa and another in the Palau de la Generalitat”, Illa has sentenced.

In a speech in which he has interspersed Spanish and Catalan, Illa has claimed to put an “end to” the “intransigence” and the “unreason” of the ‘procés’ because, he said, “half of Catalonia needs the other half, even if they do not think like her or vote like her, “so if she becomes president, she has promised that” whatever happens “she will speak” about everything and everyone. ”

He has warned of the “paralysis” to which, in his opinion, the “one-sidedness” of the independence movement has led and has placed as a dilemma in the face of the elections choosing between “remaining castled in a trench struggle” or “turning the page.”

“I am not going to ask anyone for any credentials (…), I will not ask anyone what it is or what it feels like because we already have enough exclusive projects in Catalonia,” he stressed during the meeting, in which he made no allusions or to the imprisoned independence leaders or to the possibility of the pardon that the Government is studying.

“We want a new stage of reunion without bands or blocks to leave behind this lost decade of painful disagreements and useless complaints,” he added. “We have a project to transform Catalonia, we have equipment and experience,” he highlighted after denouncing “attacks” on their headquarters and “very strong pressure” on the Socialist councilors for the ‘procés’.

“Far from any intolerant fanaticism and irrational dogmatism, the PSC is willing to assume the responsibility of building a dialogue Government”, he emphasized to clarify that the objective of his roadmap “is to” return “Catalonia” to its place in Spain and Europe”.

“I am clear about it: I am directly opposed to extremes because polarization despairs me and I reject exclusive nationalisms because it is absurd to want a closed society,” he added, in addition to highlighting the “unequivocal commitment” of the Government to Catalonia and celebrating its ” democratic convictions “:” Respect for the law is the basis of coexistence. ”

For his part, the first secretary of the PSC, Miquel Iceta, has celebrated the election of Illa as the party’s candidate for the Catalan elections. “We show that we want to win, that we are going for it all,” said Iceta in the socialist political act, where he defined Illa as the best candidate to “turn around ten lost years” of the independence government.

“They promised us independence, and not only have they not achieved it, but they have left a sad legacy of mediocrity, incompetence and decadence,” said Iceta. The first secretary of the PSC has claimed that it is time for the Catalans to have a Government “capable of governing effectively, of using its resources efficiently”, and of cooperating with other administrations.

And he added that Illa can unite the Catalans around shared objectives such as the fight against the pandemic and economic reactivation: “We need, we want, we demand a president and a Government that work for everyone.”