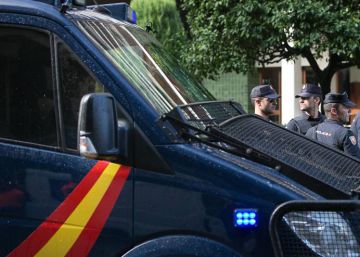 The National Police has arrested on Wednesday the husband of the 36-year-old woman who died in June last year in a jacuzzi of an industrial building of the Industrial Estate of Ciutadella, Menorca, for his alleged involvement in his death. On June 18, 2018 at six in the morning the Local Police of the Menorcan town received a call from a man who claimed to have found his wife's body in a jacuzzi inflatable inside the ship of a nearby industrial estate in which both lived.

A patrol went to the scene and the man told them that he had fallen asleep and when he woke up he had found his dead partner in the pile. He suspected that she could also have fallen asleep and that she accidentally drowned after they both spent the night partying. After several subpoenas to testify, the 40-year-old suspect was released without charge as no connection was found with the death of his wife.

However, a year and a half later the case has taken a turn. After an investigation of several months, the National Police has compiled evidence that the death of the woman, that the night of the event had consumed narcotic substances, was not accidental and that her partner was involved in it. The man has been transferred from the peninsula to Menorca, where he has been charged for the death of his wife.

In recent months, the detainee had been in pretrial detention charged with the murder of a previous couple, with whom he lived in Venezuela. The South American country requested his extradition, but was denied because the man has Spanish nationality. Thus, the defendant has remained in a Spanish jail waiting to be tried for the events in Venezuela. This Wednesday he has been transferred to Ciutadella where the police have charged him with the death of his wife last year.

The detainee had multiple records of mistreatment of the deceased, which occurred when the couple lived in Barcelona. Some time later the marriage moved to Ciutadella, where the situation of violence was repeated and caused the victim had to be surgically intervened due to the injuries caused by her husband. The detainee will go to court for the next few hours.

He Last year, and in the absence of official confirmation of this case as a sexist crime, it closed with 50 women killed. So far in 2019, 52 women have been killed by their partners or ex-partners in Spain according the balance of the Government Delegation for Gender Violence, updated to November 25. In total, there are 1,028 women killed since January 1, 2003, when they began to be officially counted. Forty-three children have been orphaned this year because of sexist violence and two children were killed by their parents.

016 is the victim assistance number of gender violence. It does not leave a mark on the invoice, but it must be deleted from the call log.

TEST | What kind of traveler are you?

Agrigento, the valley of gold coins