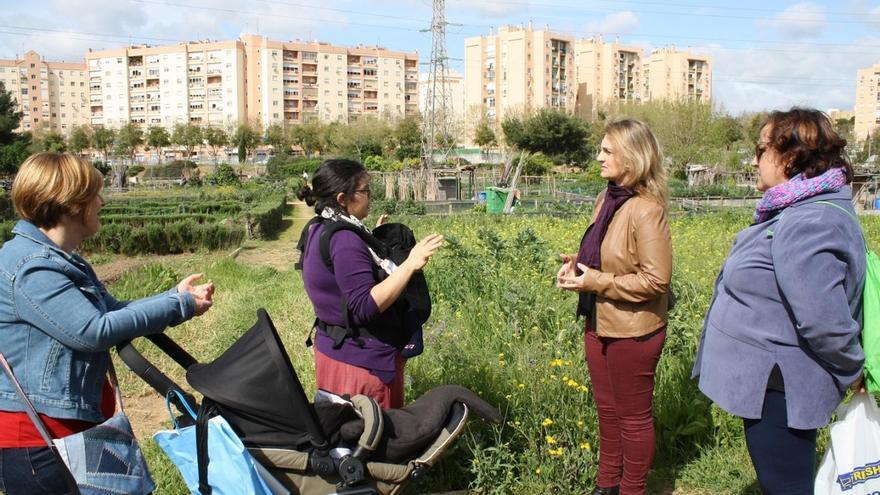 Hunger has become visible again in our urban environments, and in many cases it is the community pantries and neighborhood mutual aid networks that are guaranteeing the right to food in an exemplary way in the face of institutional slowness and passivity. In this article, looking beyond the obvious social urgency and the emergence of responses to it that is taking place, we want to point out some reflections on the need to rethink the relationship between urban planning and food in the medium term. If we look at the city with a historical perspective, we notice the successive technological, cultural and regulatory changes that have been necessary to respond to the needs and claims of the population, ensuring an urban organization balanced enough to avoid a collapse or a revolt. In each era the fit of these pieces has defined the priorities and values ​​of society.

City planner Carolyn Steel often claims that just like people, cities are what they eat. The depth of this simple statement is developed in his book Hungry Cities. How food conditions our lives, Recently edited by Captain Swing, in which traces the history of the relationships between city and food, following food from the moment it is produced, until it reaches the city, is marketed, prepared, consumed, and is no longer considered food. In this way, it becomes visible how the way we eat has conditioned the typology of houses, the morphology of cities and even our way of inhabiting them.

The city is an organized memory, affirmed the philosopher Hannah Arendt, and therefore it is necessary to have the sensitivity, the patience and the capacity to be able to interpret it. We can do it thanks to plans and historical photographs, paintings and novels; to the same built support, with the layout of the streets, the structure of the green spaces, or the origin of the built heritage; and intangible elements such as folklore, popular festivals, the toponymy that names some streets and squares, traditional gastronomy ... All of them are traces that allow us to reveal the changes that have taken place in the food system and in the food cultures on which they are based.

Today food is strongly located in the public sphere, on the political agenda and even in television programming. The defense of peri-urban agrarian spaces, the exponential growth of urban agriculture, the proliferation of agroecological consumer cooperatives, the increase in local producer markets in public spaces, the revaluation of food markets and other forms of expression of the Links between city and food are not the result of a fad but the most visible symptom of a cultural, political and urban dispute.

A global subcultural current that has been gaining recognition and legitimacy in the social, academic and political imaginary; to inspire a wave of urban food public policies, whose symbolic milestone would be the signing of the Milan Pact in 2015 by 122 mayors and mayors from around the world and to which cities continue to join (210 in 2020). A Pact that starts assuming that food will be one of the great global challenges in the medium term, and before which cities must assume their responsibility as a central actor when ordering the transition towards more sustainable, healthy and socially sustainable agri-food systems fair and resilient. A task that requires a systemic perspective, capable of fostering synergies and articulation between programs for access to food for the most vulnerable populations, the revitalization of the local economy or urban sustainability in relation to the agri-food system.

Just as in a flood, the first thing that is scarce is drinking water, in the face of evidence that food is one of the challenges of the future, many more superficial approaches proliferate than comprehensive and rigorous analyzes that respond to the urgency of radical changes. And we could put three examples that illustrate this nonsense.

1. Aseptic innovation or dialogue of cultures. Laboratories that investigate the potential of biotechnology and synthetic food monopolize millionaire budgets; while those centers for agroecological research, training and innovation survive thanks to a militant impulse. As the budgets dedicated to R&D indicate, today it seems less fanciful to design a menu based on synthetic meat and algae raised in tanks, than to modify the diet, consumption habits or agronomic management.

2. High-tech design or regeneration of territorial resources. In the cities the imaginary smart city applies to urban agriculture giving rise to vertical farms, who come to propose that food security is going to be solved through the construction of large skyscrapers whose function is to produce food. Its defenders present futuristic visions of cities supplied from intelligent buildings and hypertechnological systems of food production, freed from natural limitations, replacing natural cycles with closed circuits of water and electricity, and oblivious to environmental limitations such as pests, droughts. , floods ... Urban agriculture is an essential piece of change and cities can make significant contributions in reducing their food vulnerability, but urban agriculture must assume its contradictions and specify limiting factors (energy balances, irrigation with drinking water, pollution ...). The key is that maximizing its potential does not imply the arrogance of ignoring the existence of a peasant culture and a rural world that feeds us, and that cannot be aseptically supplanted by skyscrapers oriented to food production.

3. Urbanized fields or ruralized cities. The consequence of this trivialized conception of the rural environment leads to its museification and the construction of tourist mega-infrastructure for urbanites. The perfect metaphor for this phenomenon would be the construction of the largest skyscraper in Europe in Brande, a sparsely populated rural municipality and benchmark for outdoor activities in Denmark. The Bestseller Tower, promoted by the textile corporation born in this region, will measure more than three hundred meters and will have a complex with a hotel, shopping center, restaurants and facilities. All this built following strict environmental quality controls and seeking an aesthetic integration with the environment. This project aims to attract hundreds of thousands of visitors annually and become the engine that stimulates the local economy.

Skyscrapers that produce lettuce in the city, skyscrapers of offices and shopping centers in the countryside that outsource the rural environment and turn their back on traditionally peasant activities. A dynamic that supposes the maximum simplification of systemic thinking posed by ecology.

A food urbanism should not be an accomplice to this narrative where the unsustainability of the food system is reduced to a purely technical issue, encouraging denaturing, industrialization and hypertechnologization of the way we eat. The options used in the past have configured physical supports and infrastructures that require enormous efforts to be transformed, so to configure new settlements starting from the old cities we must prioritize a cultural change that people want and want. perceive other ways of living them as feasible. The greater flexibility of recomposition of social systems (lifestyles, values, beliefs, desires or social norms), makes them the lever from which to activate the necessary structural changes. Transforming the way the food system works, as Hungry Cities proposes is a great way to start.

Francis Bacon used to claim that some books are tested, others devoured, but very few are chewed and digested. And it is that in digestion we merge with what we eat, be it food or words, few greater compliments can be made to a book like this, capable of making us talk about urban planning and food during long after-dinner meals. So at the table, it's time to read!