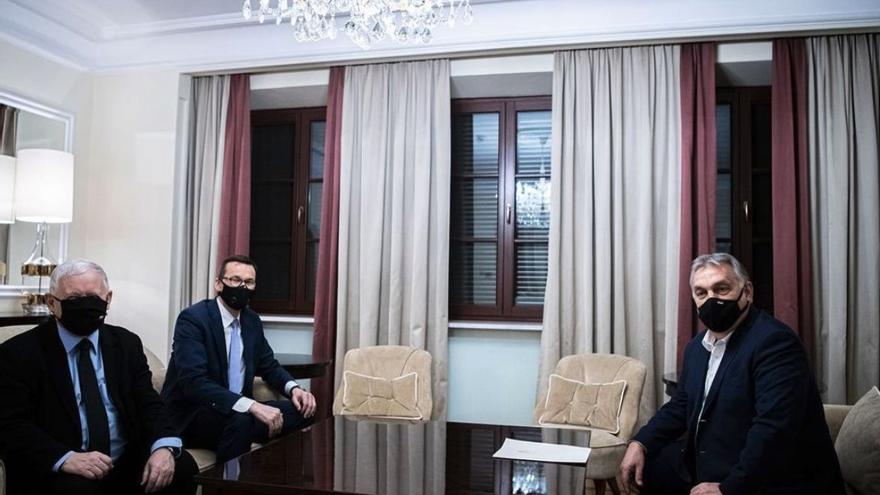 “Signals are needed between today and tomorrow.” So said a senior representative of the European Union on Monday. “Otherwise, we will implement a plan B,” he announced. The ultimatum was addressed to the governments of Hungary and Poland for their veto of the 750,000 million in recovery funds and the 1,074 billion of the EU budget for 2021-2027 for their opposition to the mechanism that links European money to respect for the State of Law.

“If the talks in the next few days go in the right direction, we have a good chance of winning,” Hungarian Prime Minister Viktor Orbán said after meeting with his counterpart Mateusz Morawiecki in Warsaw. The meeting was attended by the leader of the ruling party, the PiS, and the country’s strongman, Jaroslaw Kaczynski. Orbán also affirmed that Budapest and Warsaw agree on the importance “of defending the European Union treaties, national interests and EU funds corresponding to Hungary and Poland.”

The Hungarian Prime Minister added that “the joint position of Hungary and Poland is now closer to that represented by the current German presidency of the EU than a couple of weeks ago”, although he did not specify how the positions were getting closer. and added that the two parties are “within a centimeter” of the agreement in an interview with the Polsat chain during his visit to Warsaw.

“We have a good opportunity to close this whole thing this week during the summit,” Orban said without giving details: “We can reach an agreement that will be a great success.”

Polish government spokesman Piotr Muller, for his part, spoke of the danger of not leaving the bloc, and warned that if the EU does not move, “the chances of an agreement are small. We need clear guidelines to separate the state from budget law, no question about this. ”

Hungary and Poland are being investigated by the EU for their democratic setbacks, which exposes them to lose with the new mechanism.

If they insist on their veto, the alternative is a plan B that other EU leaders, led by German Chancellor Angela Merkel, are willing to put in place to effectively direct stimulus funds to the other 25 member states, excluding Hungary and Poland.

Diplomatic sources explain that the possibility of offering them a statement is on the table saying that the mechanism does not go against anyone in particular – not against Viktor Orbán or Mateusz Morawiecki – that the Community Executive will be “objective and treat everyone equally that it will not be used to pressure other areas such as migration “, the latter issue that is systematically agitated by the Hungarian Government. According to some sources, Morawiecki may have been inclined to accept this statement about how interpreting the rule of law mechanism can appease the government but, so far, Orbán continues to refuse. “We agreed with the Poles on a joint position, not to accept anything that is unacceptable to the other,” Orbán recalled.

But, if Orbán and Morawiecki continue with the pulse, in the next hours the 25 – or 24, if Slovenia continues to support Budapest and Warsaw – they will activate a plan B, which can go through an intergovernmental agreement – MEDE type – or a reinforced cooperation . “We need an agreement or clear signals from Poland or Hungary today [por el lunes] or tomorrow. If we do not have it, we will advance to plan B, “diplomatic sources explained this Monday. A plan B that could well be activated at the summit of EU leaders that is held in Brussels on December 10 and 11, if the contentious.

But, for the moment, the signals that arrive are that the blockade has not yet been lifted, which also includes the EU budget for 2021-2027, 1,074 billion euros, for which the only plan B consists of extending the previous year monthly, with which there would be no new items –just transition fund, for example– and some, as they are annual, the Erasmus program would fall.

The two Eastern European countries, which are net recipients of EU funds that have helped transform their economies since joining the EU, could lose 180 billion euros between the multi-annual budget and the aid fund.