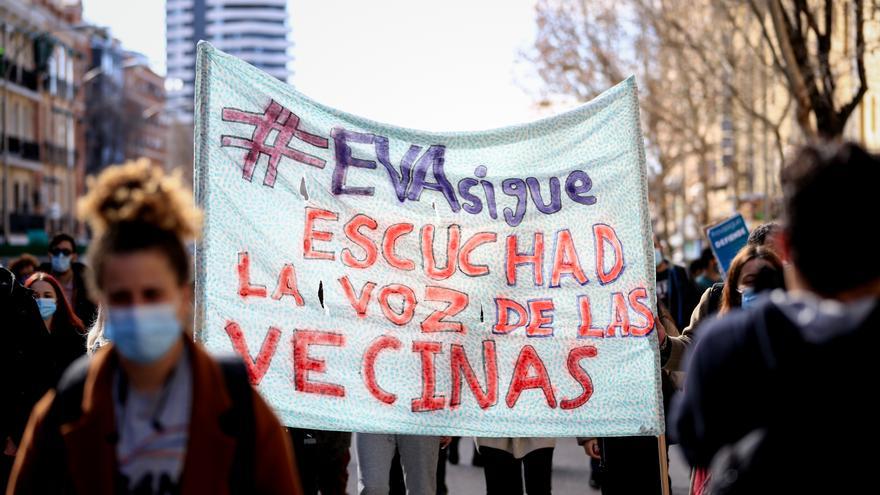 Different neighborhood and cultural groups, as well as private citizens, have participated this Sunday in a demonstration, with a 5-kilometer route, in support of the continuity of the Arganzuela Neighborhood Space (EVA) in the old Fruit and Vegetable Market of Legazpi and to show its rejection of the “harassment” of the municipal government chaired by José Luis Martínez-Almeida and Begoña Villacís “to all social centers and everything that is participatory.”

Shouting ‘EVA does not close’ and ‘EVA continues’, hundreds of people have walked the streets of the Arganzuela district with banners that read’ Madrid needs you. EVA continues’, ‘Listen to the voice of the neighbors’ or’ Their lies unite us more ‘. One of the EVA spokespersons, Sacri García-Rayo, recalled that, despite the four-year assignment of this premises, the group had the possibility of an extension, something that has not been finally executed by the City Council.

He has also pointed out that this decision of the City Council “is part of the harassment of all social centers and everything that is participatory.” “Not only is EVA, but then the Chamberí House of Culture comes (February 24). There are already some evicted and others who are going to evict them,” García-Rayo stressed. “They have not evaluated the activities and social work, they have only decided that they will close us and that’s it. I think that these centers are doing very important social and cultural work, it is incredible that this City Council is dedicated, calling itself democratic, to closing centers”, has criticized.

Along these lines, one of the spokespersons for the La Ingobernable social center, Gabriela Vázquez, has pointed out that, in times of pandemic and in the face of the economic crisis, it is necessary that “these types of spaces be respected, in which citizens can support”. While the representatives of Solar Matilde, in Carabanchel, and La Gasolinera, Salamanca, have accused the mayor of Madrid, José Luis Martínez-Almeida, of leading a government that is “an enemy of the public” and that goes “against everything that is participatory. and self-organized “.

Representatives of political parties from the spectrum of the left have also attended this concentration, such as PSOE, Más Madrid or Izquierda Unida. The spokesperson for Más Madrid in the Assembly, Pablo Gómez Perpinyà, has defined the Government of the capital as “Destrucciones Almeida SA” for acting against Madrid Central, the feminist mural of Ciudad Lineal, for removing the plates of those shot and now vacating this center of Arganzuela. “The EVA is a space that is exercising an essential function for the neighborhood fabric, which has been serving sports, social affairs and activities of all kinds for four years and through which almost 20,000 people have passed,” he stressed.

The spokesman for the municipal Socialist Group, Pepu Hernández, for his part, has defined these neighborhood demands as “fair” and has foreseen that “unfortunately” they will have to focus more times before the “strategy” of the City Council of “harassment and demolition of the neighborhood associations “. “It is disastrous for participatory democracy. Madrid increasingly resembles what they want it to be: less plural, diverse and participatory. It does tremendous damage to democracy,” Hernández asserted. He has also criticized the PP, Ciudadanos and Vox for trying “by all means” that “the public is discredited”, while highlighting citizen work for “struggles for feminist and environmental issues” and reaching places where “they do not reach administrations “.

The spokesperson for Izquierda Unida in Madrid, Ruth Villaverde, has also criticized Almeida for evicting the EVA since it is a center in which “hundreds of people are being served who are currently not seeing their needs covered by the services. public “. “We support the EVA and all those centers and associations whose freedoms are being curtailed with the closure of these spaces,” he concluded.

The concentration took place before it was known that the 31 Contentious-Administrative Court of Madrid had dismissed the precautionary measure to suspend the eviction of the EVA, scheduled for this Monday after four years of assignment, after the appeal presented by the Madrid City Council . “As indicated by some media, we have been denied the appeal to avoid eviction. We only say one thing: this is just beginning,” they have written on the Twitter account of the neighborhood space, a message that ends with the hashtag #EVAsigue.