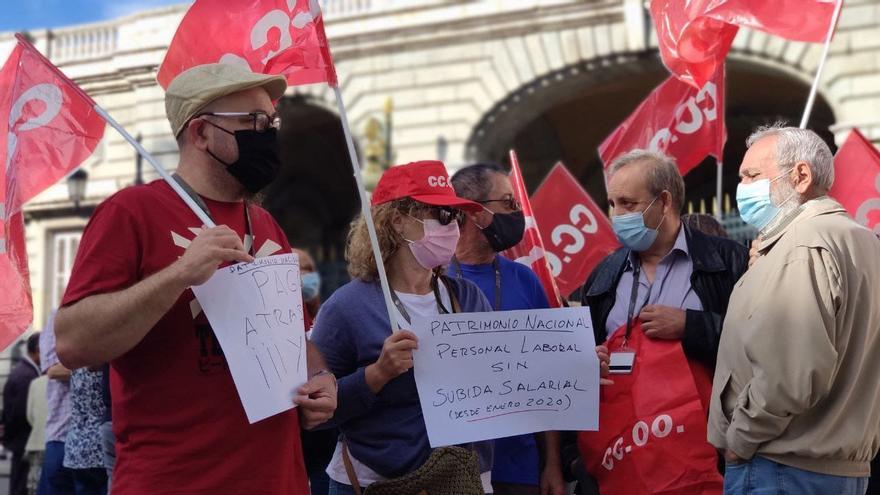 When the Government announces the 2022 salary increase for public workers, of 2%, There are hundreds of State Administration employees who are still waiting for the 2020 increase to be applied to them. Almost two years later, the workforce of some public bodies has not been able to see it reflected in their payrolls. the rise of between 2% and 2.3% for that exercise. Neither was that of 2021, 0.9%. At least, this situation affects the employees of the National Heritage, the SEPE, the Prado Museum and a minority of the Social Security, as confirmed by elDiario.es. Although the Administrations in question claim to this medium that they will solve this situation between October and the end of the year, depending on the case, the representatives of the staff report that this delay has occurred. "It is not tolerable," criticizes a National Heritage worker.

The delay in the application of the salary increase to the Administration's workforce counts with complaints from previous years. In the case of civil servants, the annual increase is implemented automatically, but the workforce has to go through a different procedure, which lengthens its application somewhat. But between that "something more" and almost two years there is a stretch, emphasize the workers affected by the long delay accumulated by various public bodies, who insist that this situation should not be allowed - or repeated in the future.

At least, the problem affects some 2,300 people who are part of the workforce of some state agencies that have their own collective agreement. Specifically, National Heritage, the SEPE, the Prado Museum and a minority (about 50 workers) from the Social Security, as this media has been able to confirm, although it is possible that this situation extends to some other institution.

The causes of delay are different depending on the case. Sometimes, it responds to an apparent lack of diligence or management problems on the part of the management of the organizations, while in other cases - such as the SEPE - the unions denounce the lack of means and resources to be able to apply the salary increase to the template.

The almost a thousand public employees of National Heritage, the vast majority, attended with their frozen payrolls the news published exclusively by elDiario.es that The agency paid for the salaries and travel of staff who traveled to the United Arab Emirates to assist the King Emeritus. A group of Heritage workers demonstrated in the surroundings of the Royal Palace in Madrid on the first Wednesday of October, summoned by CCOO, taking advantage of the visibility given by the so-called 'solemn relief' of the royal guard.

"In Heritage, the delay is due to neglect and mismanagement as a consequence of the continuous change of high positions. The situation is unsustainable, they are 21 months late that have no justification, "they denounce from the union's representation in this public body.

In the Ministry of Public Function they recall that in the case of labor personnel, if the collective agreements do not reflect the updating of wages automatically, the public institution in question must comply with several steps. First, it has to negotiate the distribution of the salary increase and, later, it has to report the agreement reached to the Commission for the Follow-up of Collective Bargaining in Public Companies (CSNCEP). The body must also obtain "a report from the Interministerial Remuneration Commission (CECIR)".

National Heritage responds to elDiario.es that the agreement with the staff was reached on "December 4, 2020". However, it took almost four months for Patrimonio to communicate it to the CSNCEP, according to the Public Function to this medium. "The agreement for the distribution of increases was sent for the CSNCEP report at the end of March and the CSNCEP reported it at the beginning of May." Since May, the Ministry indicates that Patrimonio has not yet taken the next step to implement the salary increase for its staff. "Until now, the request for National Heritage for the CECIR report has not been received," they explain in Public Function.

In National Heritage they reject that they have not completed the steps and point out that it is "a long and complex process that can sometimes be slowed down by circumstances beyond the control of the parties." "All the procedures are finalized," they assure this medium. In the organism dependent on the Presidency of the Government they maintain that "the payroll for October is made with the new salary tables." That is, it will reflect the 2% salary increase of 2020 in the salary, but the 21 late monthly payments will not be paid yet. "Work is being done so that arrears are perceived as late in the November payroll," they add.

The representation of CCOO in Heritage denounces that the "mismanagement" of the body is reflected in many other areas such as the negotiation of the collective agreement, which it criticizes that it is "paralyzed for several years", as well as the delay in the application of the salary increase of the 0.9% of 2021. "This is a snowball," they lament.

At the Prado Museum, practically all its staff are employed, some 440 people, to whom it has finally been communicated that the payroll at the end of October will reflect the 2020 salary increase. As in Heritage, it will not include arrears for the moment. These will be paid "before the end of the year", they explain from the Museum. From the works council they denounce the lack of interest in managing the salary increase, which has "blocked" the negotiation and application of the new collective agreement in the body.

"They certified us the 2020 wage bill in October 2020," they explain from the representation of the workforce. This is a necessary preliminary step to negotiate the distribution of the salary increase. However, the Museum had a discussion with the Treasury about the increase, which lasted until December, they say in CCOO. However, the Museum's management did not summon the workers' representatives until May of this year, "after we filed a collective dispute." That same month, an agreement was reached on the 2% increase and, four months later, it has not yet been implemented.

In the case of Social Security, there is only a small group of "about 50 people" who have not received the salary increase almost two years later. The rest of the workforce received the arrears of the 2019 and 2020 update "in the September payroll," they explain in Social Security. The remaining 50 employees are not framed within the same agreement, so it had to be calculated independently. "It has already been approved, so it will not take long to be paid as well," they indicate in the Ministry.

Finally, the almost 900 labor workers of the SEPE (State Public Employment Service) will also see their payroll updated in the month of October, they assure in the Ministry of Labor. The agency has been key in this crisis due to the pandemic, due to the processing of ERTEs. "The problem here is with the computer system that the SEPE has. Just as we have a long overdue program to manage and pay benefits, it also has consequences in the management of our payroll. Data have to be reviewed and there are not enough staff to do so There are very few colleagues on the payroll, it is not a matter of lack of interest ", explains Françoise Calvo, UGT representative at SEPE. The union member reiterates the demand for an increase in the staff in the organization: "There is a lack of personnel everywhere in the SEPE, as you can see. That is our problem."

Detected the origin of the delays, the unions demand a solution. For what it takes will, they repeat. "Sometimes there is mismanagement of the Administration, others tell us that there is I don't know what technical problem. But there is also negligence, because when there is a will, problems are solved in less time", underlines Carolina Frías, general secretary of the sector State Administration of CCOO.