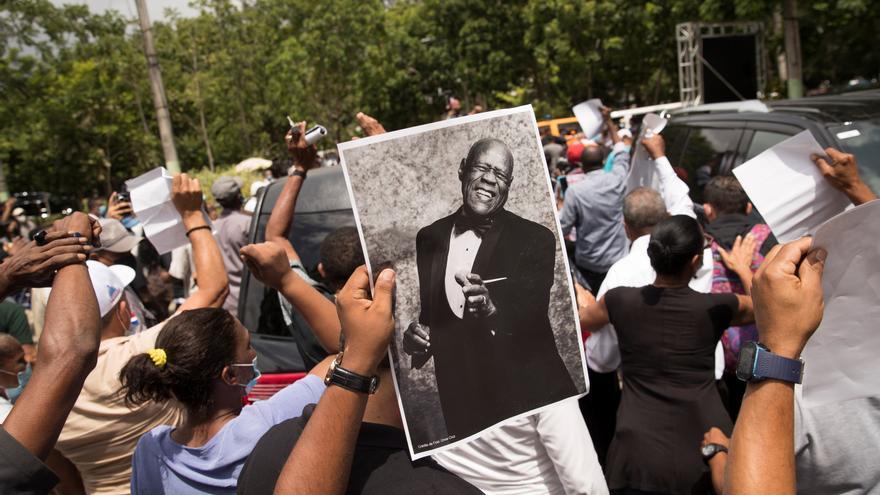 Santo Domingo, Jul 31 (EFE) .- Hundreds of people have paraded this Saturday in the city of Santo Domingo before the coffin that keeps the remains of the Dominican merenguero Johnny Ventura, one of the country's best-known artists in the world, and who He died last Wednesday at the age of 81, the victim of a fulminant heart attack.

The Palacio de los Deportes, in the center of the capital, was the place chosen for the popular funeral of the singer, composer, businessman, former deputy and former mayor of Santo Domingo.

Ventura will receive burial this same day, after the funeral procession goes through several streets of the capital's Villa Juana sector, where the interpreter was born in 1940.

"The country was not prepared for the departure of Don Johnny Ventura, that is why they have been true days of mourning and pain for the people and the national and international artistic class; we have mourned him because we loved him and we thank him for the joy he gave to his people, "said the Dominican president, Luis Abinader, who was accompanied by his wife, Raquel Arbaje.

The ruler merged into a long embrace with Ventura's widow, Josefina Flores, who was crying along with her children and grandchildren and other relatives.

"Johnny was good at everything, we will follow his legacy, his example (...) peace to his remains and we will always remember him with a smile and joy of those he left us, the Dominican people will always remember you and will always follow in your footsteps, Goodbye Johnny Ventura, "said the president, who later became an honor guard with his wife.

One of the most emotional moments of the ceremony occurred when Ventura's son, also singer Jandy Ventura, performed several of the meringues that most identified the deceased artist, while the widow approached the body to cry inconsolably.

"If I am born again", "I am Dominican" and "Merenguero hasta la tambora" sounded under the chords of the Johnny Ventura orchestra causing the overwhelmed emotion of family and guests.

"My dad asked me not to cry today and I obey him even in death (...) thanks to all living beings who at some point danced or sang a song about my dad, to everyone who supported him throughout his career, thanks to that political adversary who respected him, thanks to this, his family, who had to endure all the times he went out to do different things, "said Jandy Ventura.

Cruz sang the song "How rich is the merengue", an unpublished song in that rhythm that he recorded with Ventura a short time ago and that they had plans to release it in the next few days.

"When I was a child I used to imitate the idol that we all loved, he was a great friend who opened the doors of his house and his family to me. He was the first to bring me to this country as a soloist. I am here representing Puerto Rico, of all salsa singers, forever Juan de Dios, as I liked to call him, "said Santa Rosa.

A man who identified himself as "Ventura's number one fan" said he was arriving at the scene from his native Fantino (north) carrying a collection of Ventura photos and an acetate record.

The singer Miriam Cruz assured that Ventura always supported him in his career from the beginning when he told him in a recording studio that "everything you sing you do well, you are an angel."

The funerals concluded with a medley of songs by Johnny Ventura performed by his son, who claimed that his father "is not going to die."