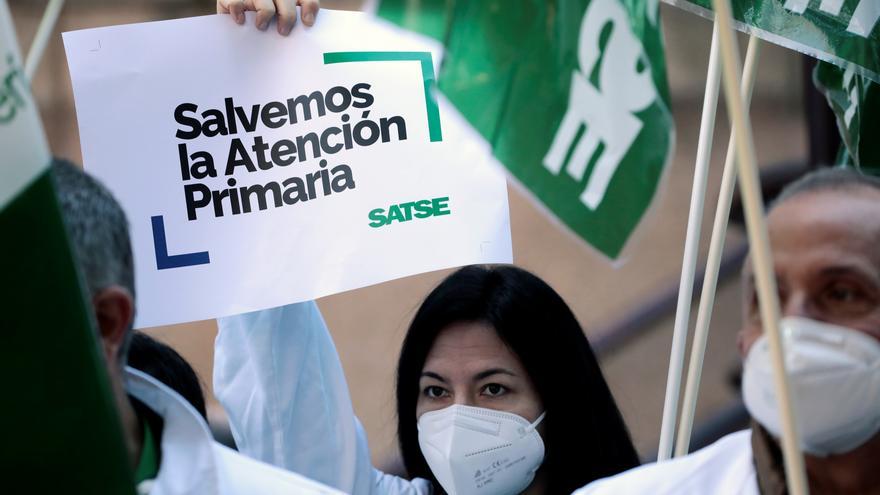 Some 300 people, according to the Government Delegation, have demonstrated this Sunday in Madrid to demand "political will" regarding the improvement of Primary Care centers, a mobilization organized by the Federation of Associations for the Defense of Public Health ( FADSP). Under the slogan "Let's save primary care", the protest has also been noted in cities such as Murcia, Castellón, Valencia, Santa Cruz de Tenerife, Zaragoza or the Balearic Islands, according to the entity.

In a festive atmosphere and to the rhythm of drums and whistles, the attendees have demanded the reinforcement of the staff of the health centers, the increase in the budget for health and the reduction of the waiting lists, in a journey that has started from the Paseo del Prado, in front of the Ministry of Health, and has ended at Puerta del Sol in the capital.

"We are confirming that, despite the promises made by both the Government and different autonomous communities, no effort is being made to improve this fundamental level of primary care, and there are still many closed or partially closed centers," he said. to the press Marciano Sánchez, spokesman for the convening entity.

The three axes of action

Regarding the specific demands demanded by both the FADSP and the other 114 organizations and unions linked to the proposal, Humberto Muñoz, general secretary of the CCOO Health Federation, has detailed the three lines of action that, in his opinion, should address the administrations to guarantee optimal functioning of Primary Care centres.

On the one hand, Muñoz has called for "adequate financing of the system", for which it is necessary to dedicate "7.5% of Spain's GDP" to public health. Within the item, 25% should go to these centers, assuming an investment plan in the short and medium term estimated at "no less than 10,000 million euros".

The second proposal is the reinforcement of the templates in these centers, while "a high percentage of health workers has been lost." Specifically, Muñoz has specified that "around 8,000 primary care doctors and paediatricians" are needed, about "15,000 nurses" and between "10,000 and 12,000 professionals that include administrative staff, physiotherapists or midwives".

Finally, the spokesman has asserted that it is necessary to "change management modes" regarding the operation of Primary Care. “It cannot be that the average delay to have an appointment with your family doctor is 6 days, and that 35% of the people who make an appointment to go to their health center take more than a week to give it to them”, has denounced. The solution, according to Muñoz, is to "return to face-to-face care."

Ana Isabel García, secretary of Social Policy and Housing of the Confederal Executive of the UGT, has denounced to the press that “many people are dying of cancer and other diseases” because the doctors of this type of equipment “cannot be attending to their patients at the moment in which this disease can be detected”. According to García, patients from public centers are being referred to private healthcare and outpatient clinics in towns are being closed due to lack of personnel.

The scientific society has also been present through Enrique Revilla, a family doctor, who has stated to the press that the sector is in a situation of "progressive deterioration" due to the lack of budgetary and personal resources, a circumstance that has left Primary Care centers “in conditions of collapse”.