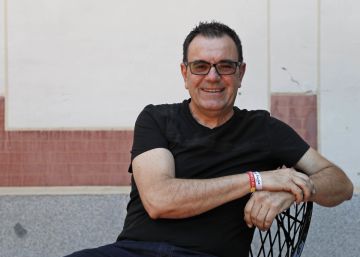 Venezuela's deep crisis leaves little room for jokes. Humor has always been a double-edged sword. Caricature reality to show the atrocity of a political regime, do not like those who feel portrayed. Caricature the reality to leave in evidence to a political regime, do not like those who feel portrayed. It is at the same time an escape route. "Humor has become the redoubt of freedom" in Venezuela, says the comedian Laureano Márquez (Tenerife, 1963). Although he defines himself as a specialist in unfinished careers (he does not finish Law, Philosophy, or Theology) he did graduate from Political Science at the Central University of Venezuela and political criticism was directed. He has learned to overcome legal problems with a second reading of his texts in which his censor inside. That is why he has taken time out of Venezuela to write with more freedom. Son of Spanish emigrants and as Venezuelan as the most, has presented at Casa de América Cartoon of Venezuela: From Macuro to Maduro, a graphic story with humor and rigor that signs together with the caricaturist Eduardo EDO Sanabria, with which they pretend that Venezuelans meet their history.

Humorist, screenwriter, writer … How do you define yourself?

Sometimes it costs me a little (Laughter). I think mine is in the field of humor and analysis, my columns of humor have been losing humor, which sometimes I reproach myself.

Are you still looking for humor in Venezuela?

There is a lot of wear and tear, but it is one of the few things that remains … The humor in Venezuela has become the way to denounce the tragedy we live, that is why we are so persecuted and so badly seen by the regime because humor has become in the redoubt of freedom. When freedom fails in many areas, it is the only one that can maintain it because it has mechanisms to deceive the tyrant and deceive the dictatorship or censorship.

How has that censorship gone?

At times we have had direct confrontations with the power, there have been fines by the Government, once the information minister threatened us with criminal sanctions, the newspaper for which I write, As is, you can not even print out anymore … And TV shows like The leaf They have been angry with me a lot of times.

Is humor a weapon of denunciation?

Charles Chaplin did the Great Dictator at the worst moment of Nazism and made a film in which stripped authoritarianism and pronounced in favor of democracy and freedom. Humor always has a great commitment.

Why now a history book?

History is like the knowledge of one's own DNA. To the extent that we do not know our history we fall into errors that are very similar. We wanted to make a fresh story, summarized, that gets closer to the people. Also thinking about the new generations that are very visual and the children and young people who are growing outside and far from Venezuela, we have four million Venezuelans out of the country.

Last book that made him laugh out loud?

Now I'm not reading laughing books … but it always makes me laugh. Achilles Nazoa, I always return to him is my favorite author of Venezuelan humor.

What references does it have?

In Venezuela my teachers are Pedro León Zapata, who always had a committed mood, Leoncio Martínez; Outside of Venezuela, I liked the Argentine Enrique Pinti and the Mexican Mari Moreno Cantinflas. In Spain the classics like Jardiel Porcela and the new ones, for example, Buenafuente, which I think has a very interesting humor. Rovira …

What book would you give a child to introduce you to reading?

When did you cry for the last time?

Very recently, reading the book of The Daughter of the Spanish, by Karina S. Borgo. It made me cry a lot because it is polyvalent, when you read it, anyone understands what we are living in Venezuela, but if a Venezuelan reads the places he names and the smells I have smelled them too. It transported me a lot and it hurt a lot because although it is fiction, similar and worse things have happened.

What book would he have killed for writing?

The name of the rose, by Humberto Eco for how he handles theses of humor as a weapon of thought. Yes, that book I would have liked to write, but he got ahead of me. (Laughter)

What are you most proud of in your job?

I feel that every day is a challenge, a commitment. I feel good when I feel that I transmit hope to people, when I hear their laughter it is heaven and that nourishes me, encourages me, be useful, be helpful and awaken in people their inner luminosity.

What would you change about yourself?

Of my character I would change a little the melancholic spirit and sometimes of easy sadness, that I believe that it is a thing that happens to the comedians a lot. Although that change is relative, because what if I change something and I'm wrong?

What is the best advice given by one of your parents?

When was he happiest?

A great happiness is when you have a child. I have a daughter and I am always happy about her achievements, she has just presented a play here in Madrid, I rejoice at her kindness. I think it was a good work.

What leaves him without sleep?

For a Venezuelan the main source of anguish is the destiny of the country.

Who would be trapped in an elevator?

How long, for more or less calculate …? (Laughter) With my current partner.

In a costume party what would be disguised

What is the last music you downloaded?

Now I have vinyl records again and the last thing I downloaded was the hymn to Beethoven's joy that I bought it on the Tenerife Trail; for me to download it is to download it from the car and put it on the plate because I have not reached the digital download part.

How do you see the future in Venezuela?

I base my hope that I see too much talent in Venezuela, it is a nation that produces talented people in many areas, engineers, painters, artists, the director of MIT is Venezuelan … When I see that I wonder what happens to this nation, which is capable on the one hand to produce so much talent and on the other to be in the hands most hamponiles of all history.

If I had Maduro in front of me, what would I say?

How difficult … I think I would say … President life is very short and the eternity is too long to dedicate the short life to harm your fellow men, stop the crime, the crime, for the oppression of your people and open a path to the freedom, that is everyone's, also that of your children for a different country

And to the president in charge Juan Guaidó?

First, I would thank him for his level of commitment. I do not feel able to give him any advice, I think he has done what he could, but he would say as the oracle of Delphi once told Nero: Be careful with the age of 73. Nero was 33 years old, while he was rising against him (Servio) Galba with his 73 years. Beware of the age of those next to you, who are sometimes the main obstacles to your path and your work, which is everyone's.