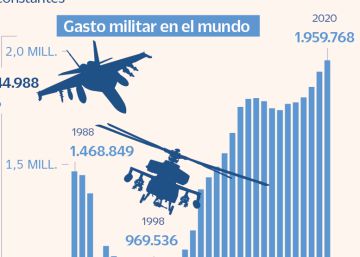 In the year of the greatest health and economic crisis in decades remembered, humanity thought about vaccines with the idea of ​​recovering their normal life. But the countries, in addition to thinking about cures and controlling the situation, did not lose sight of another less popular issue among part of the population: military spending. Always controversial, the debate between those who think it is necessary and those who defend that it is a budget item that the smaller it is, the better, it is served. The data answers the question of how much money is spent on weapons. However, even the data can be twisted to the liking of whoever uses it to argue.

According to him International Monetary Fund (IMF), in 2020 the world gross domestic product fell 4.23% compared to 2019 levels as a result of the stoppage derived from Covid. Following an opposite path, the figures and estimates compiled by the Stockholm International Institute for Peace Studies (Sipri) suggest that in 2020 governments spent 2.63% more on defense than in 2019. The absolute figure of world spending in 2020, 1.96 trillion dollars, is the highest since Sipri has reliable records, that is, since 1988. It can be said then that the world spends more on weapons than in decades, but it is not that simple. In absolute terms, this is indeed the case, but if global military spending is put in relation to world GDP, far from it.

The world spent about $ 1.47 trillion on the defense industry in 1988. With a world GDP at that time of 19 trillion dollars, 7.7% of the planet’s money was dedicated to this activity. In 2020, with a global economy of a size of 83.85 trillion dollars according to the IMF, military spending, at maximum in absolute terms, is around minimum in relation to its weight on the global economy, representing 2.33% of the total. total GDP. To get an idea of ​​whether the percentage is low or high in historical terms, from 1988 to the present the minimum of this variable was reached in 2018, when military spending represented 2.14% of world GDP.

Carlos Martí Sempere, a collaborator in studies at the Alternativas Foundation and an expert in the military industry, says that the Covid it hasn’t had much of an effect on her beyond program delays or trouble getting components. “I believe that there will be no big changes for the next few years. Defense programs often have durations ranging from 10 to 30 years and generate great inertia. Just as it is difficult for them to start, it is very difficult for them to stop ”.

The collapse of the Soviet Union ended the cold war. Now, the tension between the United States and China is also evident through defense spending and explains why this item continues to grow in global terms. While the largest power in the world alone represents 39.1% of all military spending on the planet, China already accounts for 12.5%. It is still a long way from the United States in this regard, but since 2000, its military budget has practically quintupled compared to growth of 61.3% in the United States. Russia (+ 183.4%) and South Korea (+ 118.4%) complete the list of great powers that have armed themselves the most in the last 20 years.

In the list of the main companies in the industry (see graph on the next page), of course, those that come from the countries that dedicate the most resources stand out. All the members of the list of the 10 companies that obtain the most income from the sale of arms are either American or Chinese, with the exception of the British BAE Systems, the maximum European exponent in this industry.

According to the Association of Aerospace and Defense Industries of Europe (ASD), in 2019 the defense sector obtained joint revenues of 116,000 million euros, of which 40,000 came from exports. In total, the employer estimates that the sector had 440,000 employees at that time.

Despite the fact that the large arms companies monopolize the spotlight, they are not the only protagonists. “Most defense systems are integrated systems. They have many components that must be assembled and combined to have a complete system ”, explains Martí. The large companies are the ones that contact the defense ministries and obtain the contracts, but, to fulfill them, they resort to a swarm of medium-sized companies that contribute their particular grain of sand towards the completion of the project. In Spain, according to the latest data available in this regard from the Ministry of Defense, 83% of the companies dedicated to this industry in Spanish territory have 250 employees or less.

In the document that describes their industry, the ASD states that these European defense companies allocated to projects of R&D about 18 billion. 40% was related to civil activity and the remaining 60% to the military. The industry is obsessed with innovation, although it is not something new. “It has always been an important factor, but it took off with the Industrial Revolution, in the mid-nineteenth century. Military innovation has usually been decisive in battle. And that has been the case to this day and it still is, ”says Martí.

The expert describes the current situation as one in which, without as much money in the bucket as during the original cold war, there is still a very innovative component in the industry. Yes there has been a change of draft in a few years. “As in the cold war, the military sector led innovation, the civil sector is today the leader of innovation. Obviously, the military sector continues to innovate, some things are useful in civilian life, but it is no longer the main engine of innovation ”.

Now, the military industry looks to the civil one for innovation. The United States Department of Defense turns to companies like Microsoft because, even being part of the most financed military mechanism on the planet, they cannot compete with the investment muscle of large private companies. The key: the demand for your products. The civil industry can allocate huge amounts of money to innovate supported by the consumption of citizens; the military depends on contracts from the different governments.

At the end of April, the European Parliament gave the green light to the so-called European Defense Fund. The initiative, which was initially endowed with 13,000 million euros, finally comes out with 7,953 million from the budget of the European Union that will be spent at a rate of about 1,000 million annually. The argument put forward is precisely to promote the innovation of the European military industry and its development. Of those close to 8,000 million euros, about 2,700 million go to innovation and to prototype development, around 5,300 million. In addition to this figure, the Union expects contributions from the national budgets of each country, although they do not always arrive. In cases of prototype developments, the Union contributes 20% of the cost and 80% comes from the national budget, which implies a hypothetical extra injection of up to 26,500 million euros.

“Almost 8,000 million of the European budget is not little. For countries like France it is not so much. What is certain is that European programs have a kind of symbolic or tractor effect to which everyone joins. It is money, but it is not a lot of money. If you add up the money and see that the US is spending several times more, Europe is not going to be able to catch up with this budget with this budget ”, says Martí in this regard.

The expert details the reasons behind this initiative so far unprecedented in the European Union. “The European nations that really have a defense industry are France and the United Kingdom. They were the last two great empires. France they have always wanted to maintain their world leadership, but they have realized that, although it was possible in the past, now it is not. For this reason, it promotes within the European Union what they call the autonomy of the European Union. Nobody knows very well how or to what extent Europe can be autonomous. They are justifying this support to the industry in the thesis of European autonomy and in the need not to depend on the United States ”.

The Union itself agrees with Martí in the third paragraph of its initial statement on the promotion of the fund: “To be prepared to face the threats of the future and protect its citizens, Europe needs to improve its strategic autonomy”, reads the document.

In addition to strategic ambitions and the desire to remain relevant in the world, Carlos Martí believes that there is another factor behind the European defense fund. Companies in the sector, like many others (according to Corporate Europe Observatory there is a whole industry around the ‘lobby’), come to Brussels so that the authorities do not forget about them. “It is a very important ‘lobby’. Now that the General Directorate of Defense Industry and Space has been created, the sector is in contact to remember how bad they are ”, he reveals.

Before launching the European defense fund, the Union decided to promote the creation of a group of personalities with knowledge on the matter. “In 2015 the European Commissioner for Internal Market and Industry, Elżbieta Bieńkowska, created a group of personalities, advising on defense research. Of the 16 members, seven were the presidents of arms companies (Indra, MBA, Saab, Airbus, BAE Systems, Leonardo, Liebherr-Aerospace), two were the presidents of military research centers (Fraunhofer-Gesellschaft and TNO), one he was the director of an institute for international studies (Finnish Institute of International Affairs) and 6 were European politicians ”, says the Center Delàs d’estudis per la pau in a document prepared on this issue. “This group of personalities presented a report in 2016 recommending the implementation of a defense research program with the aim of promoting a technological and industrial base for European defense.”

The Delàs Center asserts that the Union took note of the report issued by the group. “The European Commission took up a good part of these recommendations in aspects such as the level of financing, intellectual property, a guaranteed market and, since 2021, a very well-equipped financing program,” adds the Center Delàs document. “They are companies related to defense and, obviously, they are going to say how important the defense industry is. Then the Union says that, as the group of personalities has advised, it should be carried out ”, says Martí.