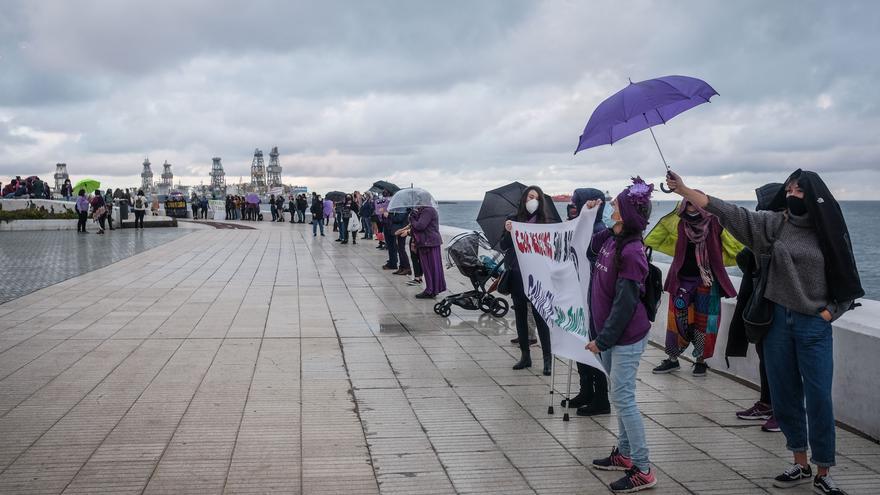 The health situation of the pandemic did not silence yesterday the common clamor of the feminist struggle against the structural scourge of inequality and sexist discrimination in a year marked by the current global systemic crisis.

The noise of voices united in defense of real and effective equality decentralized their spaces of demand – never their forces – in line with current health security measures through waves of protests and awareness campaigns in the digital environment, along with actions isolated and symbolic in the streets, such as, in the case of the capital of Gran Canaria, a human chain along the Avenida Marítima to remember that “in the face of social emergency, feminism is essential” and that under the umbrella of feminism we all fit, but all, all, all.

Under the motto Canarian feminisms without borders, the Feminist Network of Gran Canaria yesterday afternoon summoned hundreds of feminist activists, platforms, groups and collectives to form a human chain that, under strict parameters of social distancing and anticovid measures, aligned itself with the horizon to vindicate “some feminisms inclusive and diverse, without physical or symbolic borders ”, in reference to the migratory crisis at the Arguineguín dock and the greater vulnerability of the situation of migrant women and minors. “We demand feminisms without physical borders, because we demand the defense of the human rights of migrants, with special concern for the situation of women; and without symbolic borders, because we have come together to make a diverse March 8 visible, symbolizing that we are fighting together ”, read the annual manifesto.

Regarding the doubts or misgivings regarding the relevance of crowding into the streets this year in the context of the pandemic, the women protesters agree that it is precisely the current crisis, and its worsening of the gender gap in multiple areas, the main spur to underline this 8M the rights and struggle of women.

“I think it was important to maintain our presence on the streets despite the pandemic or even because of it, because the pandemic has once again demonstrated how women can once again be invisible, excluded, more impoverished and more distanced from the administrations to through the digital divide, and that we need the struggle of women to be noticed and be present in the streets ”, said yesterday Nayra Marrero, one of the spokespersons for the Feminist Network of Gran Canaria.

In this line, the feminist movement yesterday denounced through the screens, the balconies and the streets that it brings together more reasons than ever to continue raising its voice and not take a step back, since the effects of the health crisis result in a greater precariousness and impoverishment of women, which adds to the lack of conciliation policies in a social context where 86% of care for dependent people during confinement in the Canary Islands fell on women, according to data from the Canary Institute of Equality ( ICI). To this must be added the alarming increase in cases of sexist violence and the advance of the extreme right under the cover of its denialist discourse on inequalities, rights and violence against women.

“As long as women are not guaranteed equality and the conquest of our rights always, we will have to claim on March 8,” said Pilar Dacuña, a retired teacher yesterday. Along these lines, Nieves Ramos, company manager, remarked that “the demand for equality involves demonstrating, with distance, with respect and with a mask, because the street is also ours.”

The Feminist Network presented its traditional prizes and anti-prizes to exemplary and reprehensible exercises, respectively, in the fight for equality. Regarding her individual distinction, this year the Simone de Beauvoir Award went to Pilar Rodríguez Pérez, director of the Gran Canaria Women Band, while the Berta Cáceres Award to a group distinguished the Harimaguada association, which this year is dissolved after 41 years of experience promoting affective-sexual education in the classroom.

For its part, among the detractions, the Estropajo de Esparto Prize pointed to Sebastián Suárez Trujillo, councilor of the PP of the Ingenio City Council, and his macho statements; the Estropajo de Brillo, to the Las Palmas Provincial Prosecutor’s Office for their actions against migrant women, whom they separated from their sons and daughters with the excuse of “avoiding the kidnapping of minors”; and the Estropajo de Verguilla, to all local, regional and state public administrations “for their total absence this year.” And that is why it was time, more than ever, to be present: because, as feminist slogans say, no woman is illegal; impoverished woman is submerged violence. And long live the women’s struggle.