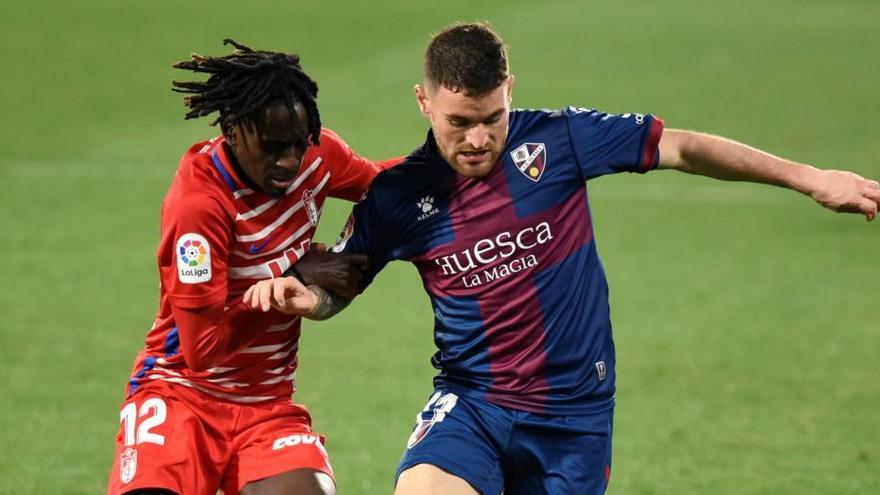 The Huesca, with his victory this Sunday over a grenade almost no headlines3-2), showed that despite the delicate situation that has dragged on for many days don't throw in the towel and that he continues alive in the battle for permanence.

The azulgranas, after adding his third win in the entire league and after two consecutive defeats, they showed that they are willing to fight to maintain the category while there is life and in addition to the three gold points achieved they added a dose of morale of incalculable value because, although they remain at the bottom, they cut the distance with the zone of salvation to two points.

Granada faced the game with numerous changes and has accumulated six games in the League without winning, and also lost the opportunity to get close to the European positions after having added three points from the last eighteen in play.

The Alto Aragonese team transformed what was being a constant into reality. The improvement in the game and the positive feelings that he had shown since the arrival of José Rojo 'Pacheta' turned this time into a victory.

The game started with a lot of rhythm and in minute 8 the Portuguese Sundays Quina, after an individual move, he finished off with a thread in the area, making Álvaro Fernández's stretch impossible and opening the scoring in the first shot on goal

Six minutes later a bad start from the Nasrid goal, Rui Silva, supposed a penalty that could equalize the contest but that the local scorer, Rafa Mir, crashed into the post right of the visiting goal.

However, far from collapsing, the Alto Aragonese team continued to dominate the game and stubbornly and that led them to equalize the score in the 31st minute with a goal from Dani Escriche with a bitten shot.

In the absence of clear attack plays, Pacheta's men took advantage of two strategic plays to change the game.

In two corner kicks, in minutes 38 and 44, Huesca turned around the electronic, first with a header from captain Jorge Pulido at the far post after an extension by Mike Rico and then with an own goal with the chest of Dimitri Foulquier, under pressure from Rafa Mir.

The Huesca had not overwhelmed its rival by what the scoreboard might suggest, but, unlike what had been happening throughout the season, it knew how to be effective.

After the return of the changing rooms, Diego Martínez's team, with the entry of Jorge Molina and, above all, Darwin Machís, again showed the ambition of the start and with a service from this Alberto Soro tightened the score (3-2) in 59 and brought the visitors back into the game.

However, the Aragonese team knew how to control the attack attempts of its rival, who no longer disturbed Álvaro Fernández's goal due to the defensive solvency of the Alto Aragonese.

Referee: Soto Grade. He sent off Germán with a direct red (m.91). He admonished Mikel Rico Seoane and Insua, for Huesca, and Rui Silva, Víctor Díaz and Nehuen, from Granada.