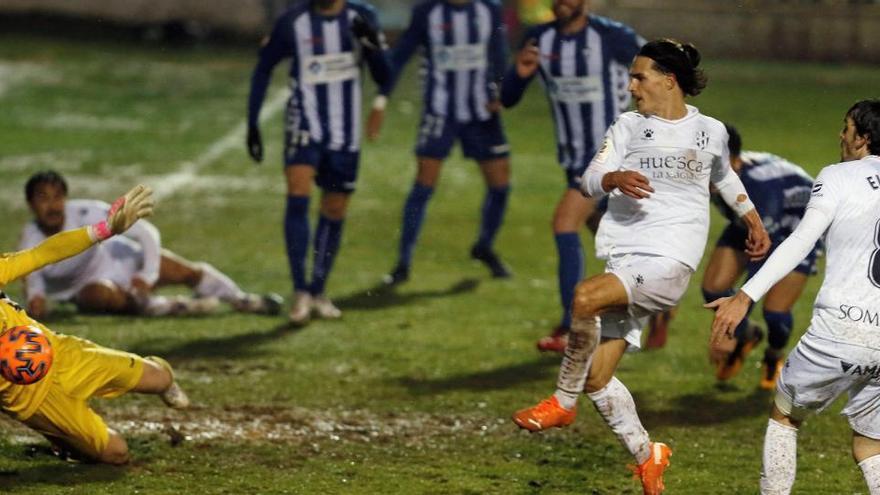 He Huesca joined the list of “victims” of the second round of the Copa del Rey, after being dropped from the competition this Thursday, when they fell 2-1 against Alcoyano, a team from the Second Division B, on a day in which Valencia, current champions, certified their classification for the round of 32 after beating Yeclano 1-4.

The Huesca group joined Celta de Vigo, Getafe and Atlético de Madrid, the other three ‘Firsts’ who were eliminated in this round, after being overtaken by an Alcoyano, who even allowed himself the luxury of missing a penalty.

But even so, Huesca did not manage to avoid the surprise, which was always in tow of an Alcoyano who went ahead at 16 minutes of play with a goal (1-0) from Jona.

The Aragonese team managed to react, which seemed to make logic prevail, by equalizing the contest (1-1) before halftime with the goal at 38 minutes from midfielder Jaime Seoane.

But Alcoyano asserted his intensity in a second half, in which the Alicante team enjoyed an unbeatable opportunity after 64 minutes to get back in front with a penalty shot that Jony Ñíguez failed to transform.

An error that did not stop the local team that continued looking for the goal of Huesca until finding his prize in the absence of six minutes for the conclusion with the goal of Jorge Moltó that established the final 2-1 that certified the elimination of Huesca.

A elimination that Eibar managed to avoid in extra time, after beating Las Rozas, a Second Division B team, 3-4, in a clash in which the “armero” team was condemned to overtime, after losing a 0-3 income.

Neither the early goals of the Japanese Yoshinori Muto and Quique, who placed Eibar with a 0-2 advantage after 18 minutes of play, nor the subsequent goal of Pedro León, who signed the momentary 0-3 at 69, prevented the suffering to those of Mendilibar.

And is that when everything seemed in favor of the Gipuzkoan painting came the reaction of Las Rozas, who forced extra time, by managing to equalize the contest with three goals between minutes 73 and 79, which put Eibar on the ropes.

But the “gunsmith” team ended up imposing logic and certified their classification, after ending the dream of the Madrid team, thanks to a goal from Sergi Enrich, who signed the final 3-4 in the second half of extra time.

But if Eibar suffered against Las Rozas, Cádiz experienced no less suffering, who had to wait for so many penalties to defeat Pontevedra, a Second B team, 4-5, after ending extra time with a 0-0 draw.

A penalty round in which the Cádiz goalkeeper David Gil, who had already saved the people of Cádiz with a sensational intervention with his foot in extra time, became the main protagonist, after stopping the last and final launch to the local defender Churre.

Many less trouble did Valencia, the current champion, who, chastened by the many troubles he went through in the first round against the modest Terrassa, a Third Division team, jumped into the Yecla Constitution stadium ready to resolve the tie on the fast track.

In fact, barely nine minutes of play had elapsed when Javi Gracia’s men, who again bet on an eleven plagued by the less common, already won 0-2 thanks to the goals of South Korean Kang-in Lee and Serbian Uros Racic.

A result that did not appease the voracity of a Valencia that before reaching the break extended its advantage even more (0-3) through forward Rubén Sobrino.

Strong marker that left a mere anecdote the goal of Yeclano, who cut the disadvantage two minutes into the second half with a goal (1-3) by Alberto Oca, to which Portuguese Thierry Correia responded seven minutes later, who made up for his mistake in the local goal, signing the final 1-4 at 54 minutes.

Neither did Real Sporting de Gijón, a team of LaLiga SmartBank, who certified their qualification for the round of 32 by beating Amorebieta 0-1, thanks to a goal by Cristian Salvador in the absence of a quarter of an hour for the conclusion.

A round in which Sabadell will not be, who were eliminated from the tournament, after falling 2-0 on Thursday in the penalty shootout against Peña Deportiva, a Second Division B team.

The harlequinado team, which was condemned to the round of maximum penalties after being unable to go from 0-0 after one hundred and twenty minutes of play, evidenced their lack of punch by missing the four shots they tried in the penalty round.

A round of penalties that Girona managed to avoid in the last second, after beating Lugo 2-1, thanks to a goal from the ruguayan center-back Santi Bueno in the extension of extra time.

The Catalan team that reached the last eight minutes of overtime play behind (0-1) on the scoreboard, turned the contest around in an electric final with the own goal of Guinean Marcelo Djalo and Uruguayan Santi Well, he made his debut as a scorer in professional football when he signed the final 2-1 for Girona in minute 122.