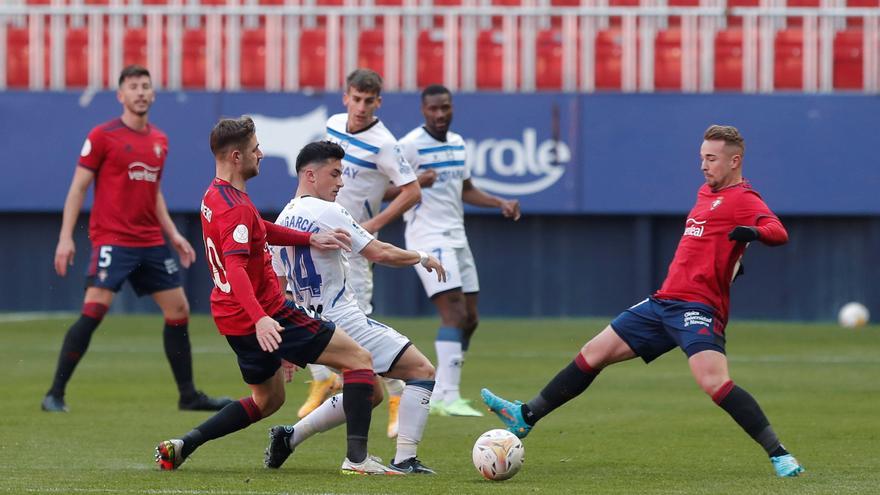 Alcorcón, with eight reinforcements, followed by Mirandés with six and Huesca and Fuenlabrada with five, are the four teams that have stirred up the most winter market to which the leader, Eibar, has hardly resorted, which has only made one incorporation.

In search of reversing its dynamic to try to get excited about the promotion positions, the Huesca He has taken out his checkbook to make five additions, all with great luster for the category such as midfielders Gerard Valentine (Lugo), David Timor (Getafe) and Paul Martinez (Levante), the Ivorian winger Junior Lake (Majorca) and the striker Dario Poveda (Getafe).

Forced by the need to seek revulsions that allow him to dream of permanence is the Alcorconwhich has made eight additions, including the Ecuadorian midfielder Joel Valencia, coming from the English Brentford. In turn, nine soccer players have passed through the exit door, including the Panamanian international midfielder fidel escobarceded to Cultural Leonesa.

Another team from Madrid, the Leganeshas also had work in its offices in this market, in which it has incorporated First-class players such as Robert Ibanez (Osasuna), the Franco-Cameroonian Allan Nyom (Getafe) and the Franco-Moroccan striker Yacine Qashmi (Lightning), as well as the goalkeeper Dani Jimenezcaptain of the Alcorcon.

The midfielder also has extensive experience in Primera Adrian Gonzalezwho after passing through Zaragoza has signed for Fuenlabradajust like the defender tachi (Alaves), the extreme Javier Ontiveros (Villarreal), the Moroccan striker Mohammed Bouldini (Santa Clara) and the Nigerian midfielder Mikel Agu (VitoriaGuimaraes).

The leader, the Eibarhe has only incorporated the central Chema Rodriguezfrom Getafe, while the other team in direct promotion, the Valladolidhas opted for the transfer of the Basque end Jon Morcillowho has played 37 games in the First Division with Athletic, and Jose Madefense arrived from Elche.

The Almeria has been reinforced with the pivot Inigo Eguarasfrom Zaragoza, a club that once again has the services of Daniel Lasurewho has overcome testicular cancer and apart from that he has renewed until 2023, and the striker Sabine Merinowhich hardly counted in Leganés.

Andres Martinwithout minutes at Rayo Vallecano, has been chosen by the Tenerife to reinforce your attack along with mario gonzalez (Sporting de Braga), the same as jonny rodriguezunpublished this course in Lazio and that will seek prominence in the Sporting Gijonwhich was also reached by the Venezuelan attacker Eric Ramirezon loan from Dynamo Kiev, and returned jordi skull from Girona.

jonathan gomezsigned left back from Louisville of the United States, and Alex Alonethe youth squad in whom Zaragoza has a lot of confidence, are two of the reinforcements of the Royal Society Bwhich will try to maintain the category as it happens to the Mirandesewhich has opened its doors for six reinforcements to enter, including the defender Jorge Saenzwho has arrived on loan from Valencia.

Without a place this season at Celta de Vigo, with whom he played 22 games in the First Division last year, the midfielder Miguel Baeza will try to be the protagonist in the Ponferradinaa team that wants to get excited about promotion, like the UD Las Palmaswhich has incorporated the Portuguese winger Hernani (Raise) and to the end Robert Gonzalez (Bethys).

The Ibiza the best reinforcement was before the start of the winter market with the arrival on the bench of Paco Jémez, who has revitalized a squad that the winger joined in January Alvaro Jimenezon loan from Cádiz and who comes to the team as an important player.

With that role of protagonist he faces his assignment Ivan Martinwho will seek with Míchel to have minutes in the Gironathe Catalan club that the Uruguayan midfielder knows well Sebastian Cristoforowho will play the rest of the season in the Cartagena.

The Malaga, harassed by a delicate economic situation, has not been reinforced as much as he wanted, although the two arrivals he has undertaken are brilliant. On one side the end Alvaro Vadilloon loan from Espanyol, and on the other the midfielder Alex Febason loan from Mallorca.

To the Lugo the midfielder arrived Paul Claveria (Cartagena) and the Mauritanian end Idrissa Thiam While in the Burgos the only reinforcement was the Serbian striker Philip Malbasicwho was without a team.

The amorebietawhich keeps intact the dream of permanence, looked for a goal in this winter market with the incorporation of Sergio Morenoon loan from Rayo, while the Oviedo did the same, almost at the end of the market, with the attacking midfielder Hugo Branchonly reinforcement along with the defender Rodrigo Tarin.