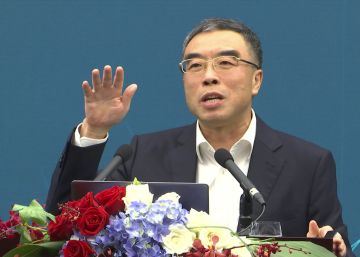 The Chinese technology Huawei assured this Friday that, despite the veto that the United States has suffered in recent months, the company's income will increase in the first half of the year, some financial data that will be known later this month. "Huawei is now moving forward as usual and, speaking of numbers, we are going to offer our financial results at the end of this month and I still can not offer specific details, but what I can say is that for the first half of this year we are going to see a increase in our revenues, "said the interim president of the company, Liang Hua.

At a press conference held in Shenzhen City, where the company is based, Liang said that, despite the fact that the president of the United States, Donald Trump, agreed with his Chinese counterpart, Xi Jinping, the lifting of the veto on technology at the last G20 summit in Osaka (Japan), "we have not yet seen any tangible change". "We know that Huawei is still on the US blacklist," acknowledged the executive and demanded that the US country lift the veto completely. And it is that the agreements between companies are complicated to apply the principle of "presumption of denial"

This alleged end to the harassment of technology was one of the achievements of the meeting between the leaders of the two economic powers, after which they sealed a truce and resumed talks to end the trade war that they have been leading for more than a year.

"Our first option is still Android"

The president of the company also responded to the rumors published these days about the possible presentation in August of the Hong Meng operating system that the company has designed and that could replace Android if the United States backs down and Google can not provide Android updates. . "The Hong Meng has been built for the Internet of things … For mobile phones, our first option is still to keep using the Android operating system," Liang explained.

However, the manager did not rule out that the company will use the new operating system also on their phones. "We have not yet decided if we will use it on our own smartphones, but since it has been developed for the Internet of Things, we would like it to be used for that, to apply it in the 5G ecosystem," he added.

Liang refused however to confirm or deny that the operating system will be presented during the Huawei Developer Conference to be held from 9 to 11 August, as noted by various industry sources over the past few days.

If the technology company, one of the companies that sells the most phones in the world, finally decides to put the Hong Meng in use on their phones, this would be a milestone for the telephony sector since it could put an end to the duopoly exercised by Google today. Android and Apple with iOS.