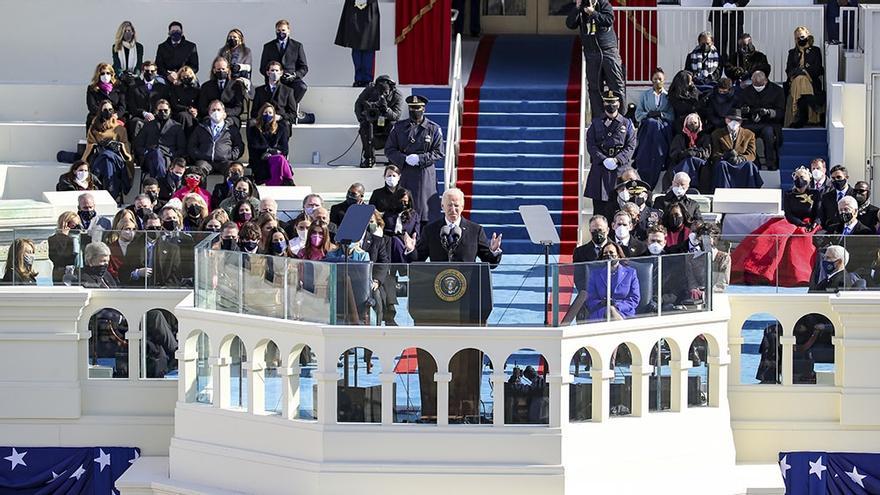 The only passage in his memoirs where Barack Obama mentions Latin America is an anecdote. Exhausted, at a dinner he feels that he is going to fall asleep under the narcotic effect of a repetitive tirade by Sebastián Piñera. The Chilean president, as a stereotypical Latino, talks nonsense of proportion about a stereotypically Latino drink that also generates drowsiness: wine. There was one issue, however, that kept the Democratic president of the United States awake: Libya. If we generalize from this story, for Obama, Latin America is a place where he does not want to be, not even in thought, because it robs him of clarity and energy to deal with the truly important issues, which are elsewhere. Despite the fact that he was its vice president for two terms, and that he has reinstated so many former Obama collaborators in key government positions, no one believes that Joe Biden seeks to divert from his thoughts Latin America, a region to which he traveled 16 times , more than any other official of his rank. The question is whether he will be able to do much more than think in the four years that are beginning.

Joe Biden is a president who comes to power without a slogan. Without a slogan that identifies it and indicates the direction and meaning that it seeks to give its government. Or worse: it does have a slogan: Donald Trump’s, America First! If I chose one of my own, I would be lying. All the foreign policy of his mandate will be absorbed, without allowing digression or detour, by the United States. Because of COVID-19 in the US and the economic recession in the US. Every day and night it will be America First! It is cruel: the most false and unusable slogan for Biden is the one that Obama sang: Yes, We Can. International politics will have to face the evils brought by the America First !, without ever avoiding the misfortunes, more persistent by older, left by the Yes, We Can. You will not be able to get rid of America First!, Meanwhile he Yes, We Can will remain in the dustbin of history. If in 2011 Obama was put to sleep by Chile, and Libya would not let him sleep, it could not be considered a stranger to the war in North Africa. It was a consequence of his personal policy of exporting a democracy that, in his eyes, exhibited as his first merit and last progress his having elected him, an Afro-descendant, as president. The breath of the Arab springs had lit fires that he neither anticipated nor extinguished, because they are still burning. The septuagenarian Biden could indicate that it is very democratic that the US, voting for him, refused a second presidential term to Trump, his youngest rival, who left him alone on the day of the transmission of command. It is difficult to represent Piñera, in his new term, discussing wine exports with Biden – the Chilean businessman knows what illusions to lose.

The only actions that can be taken for granted by the Biden presidency with respect to Latin America are those that the new Democratic administration considers will be profitable because they will alleviate problems even at the cost of creating more and greater problems for the Latin American countries concerned.

The construction of the expensive wall on the border with Mexico comes to an end on the first day of government. Also, from minute one, all Trumpist regulations on the situation of undocumented migrants in the interior of the country, those of those who request asylum on the other side of the wall on Mexican soil, as well as the rules of the game for those who claim the right asylum and for families separated on either side of the wall. Everything will be more human, they promise, and everything invites us to believe that it will be so.

Migration south of the border, from Mexico and especially from Central America and the Caribbean, is a situation for which the solutions that Trump put into effect were onerous for the treasury, harmful to human rights and dignity, and harmful for the image of the USA in the world. The unintended consequences of these measures were also burdensome, the prosecution of claims, compensation, and the waste of administrative, military and security human resources. However, the issue of the flow of Latin American migrants is not solved by itself with the enervating of once, the first day, and at the same time, all together, the brutal, but ineffective solutions, put into effect by the previous administration.

The Biden administration’s proclaimed goal is to end the caravans of economic migrants fleeing political violence in their home countries. The methods chosen by Trump were challenged with horror, and are proudly abandoned. But the transition team of the new administration detected a structural difficulty in border policies, insurmountable due to the replacement of old methods by new ones. The migratory issue cannot be resolved at the international level, because there the spiral of repression generates, too close to the US, if not already within the EEEU, renewed violence and human rights violations. The problem, they decided, to go and solve it when and where the caravan starts its march, because if it starts to march, each day that passes is politically and economically more expensive. Biden’s team designed an immediate execution plan to fund and secure loans in multinational entities for Guatemala, Honduras and El Salvador.

Basically, in its structure, Biden faces migration guided by the same principle that guided the US drug war in Latin America. As trafficking could not be defeated or consumption on US soil could not be stopped – too much American blood was spilled, corruption dirtied local authorities, the national image deteriorated – troops and federal agencies set out to destroy coca crops in Colombia or Bolivia, where they lobbied for the peasants to get by with crops and compensatory economic activities, at the same time that they financed governance programs for the authorities that allowed the DEA freedom of action. With even dollar diplomacy, the Biden administration will seek to strengthen the roots of potential migrants in their communities, which are currently very expulsive. Through political means, a sanitation of the institutions in these Central American countries will be sought, the financing of local independent truth and justice commissions that investigate corruption, the advice of the armed and security forces, the fight against crime, organized crime, without forget drug trafficking. The administration drew up detailed plans for the creation of a Central American multilateral anti-corruption entity, which would serve as a support and reference for the prosecutors of all national states from Panama to Guatemala.

In this coordinated initiative for Central America it is not impossible to recognize resonances of the doctrine of exporting democracy from Obama’s time. Although now democracy is not the end – not even in word – but a means that is predicted to perform well in its task of reinforcing US national sovereignty and security. Good success in Central America is not guaranteed in advance – neither the economic nor the political one. But for now it is the cardinal project of the Biden administration with respect to Latin America.

For Trump, in Latin America ‘democracy’ was a firearm that was used to shoot against Venezuela, Cuba and Nicaragua. Three countries with which Biden will seek the most peaceful coexistence possible, if this were possible. Cuba will be removed, also immediately, from the list of nations that sponsor terrorism, where it had been relocated by Trump’s Secretary of State a few weeks ago.

In Latin America, more than half a million people died from COVID-19: only Europe has more deaths. But the American country with the most deaths, 400 thousand, is the USA. Biden made the offensive against the pandemic a top priority and it had been his election campaign cliché. It is now offered as a zone of forced international collaboration with its neighbors for the administration that is installed in Washington.

Healthcare is a major area of ​​strategic competition in the US global rivalry with China that Biden will maintain in his own administration America First! But as Biden is urged to provide himself with a sufficient number of doses for a massive immunization campaign in the US, 100 million doses applied in the first 100 days, he will have nothing to say about the purchase of vaccines from China by Latin America: what the first Catholic president of the United States since JF Kennedy does not want them to ask him.

Another key chapter of Biden’s electoral platform that will force him to engage with the region is his green agenda in the face of climate change. The reincorporation of the US to the Paris agreement is another of the cancellation measures of the first day of government. He will neither find nor expect congratulations or support from two presidents who became, through unconnected paths, allies of Trump, the Brazilian and the Mexican.

Biden has declared that he will form a fund of 20 billion dollars for the ecological protection of the Amazon basin. Such a program is not welcomed by Jair Bolsonaro, but neither by the majority of Brazilians, who view with alarmed suspicion every foreign charity focused on the Amazon rainforest and basin as a camouflaged attack on national sovereignty supported by a surreptitious but undeniable greed for prey and plunder.

US enthusiasms for clean forms of energy are routinely scorn or sneered at by Andrés Manuel López Obrador. The politician who evokes the nationalist Lázaro Cárdenas makes the Mexican state monopoly of the exploitation of hydrocarbons one of the most unshakable bases of his government and of his creed.

It is doubtful that Biden will devote time or effort to overcome those Brazilian or Mexican mistrust. When Trump took office, several Latin American countries, especially Brazil and Mexico, feared that the new president would mess with them. Now, it is the other way around: if the new American president seems to fear something, it is that they will mess with him.

Tags: 16, America, Biden, it will be, Latin, no, relationship, subcontinent, times, visited