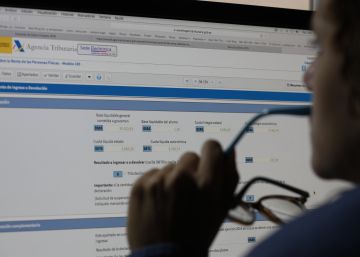 The coronavirus pandemic has impacted this year in all areas of life, also in the income tax return. The two and a half months of activity below zero imposed by the state of alarm in March and the trail of workers under temporary employment regulation files (ERTE) have fiscal consequences that will emerge in the spring of next year, when the declaration for 2020.

The significant drops in business turnover and wages will cause an inevitable decrease in the income of the Tax Agency, but they can also bring negative surprises to those affected, such as unexpected taxation next year. The millions of Spanish workers who have availed themselves of an ERTE at some point must know that this has tax implications and that they still have room for maneuver to manage its effect.

The state of alarm also supposes some adjustments in the reinvestment for habitual residence or when constituting a life annuity. In addition, and as a collateral effect of Covid-19, the 2021 Budgets include increases in labor and capital income in the highest incomes and a significant cut in the tax benefit of contributions to pension plans.

The 2020 fiscal year will have two payers for the millions of workers who have been or are in ERTE: their own company and the State Public Employment Service (SEPE). And this means that although revenues have fallen sharply, it will be probable to have the obligation to make the declaration and also to pay.

Only individuals who have received income from work equal to or less than 22,000 euros per year are exempt from filing the income statement, but provided they are from a single payer. And if there are several payers, the declaration is only avoided if what is received from the second payor does not exceed 1,500 euros. Thus, if more than 1,500 have been collected from the SEPE, the limit that requires filing for work income is not 22,000 euros but 14,000 euros. But in addition, it is possible that the return will be paid, since the SEPE payments have little withholding.

“If this year you are going to obtain income from work of more than 14,000 euros, partly satisfied by your company and partly by SEPE, having been in ERTE, get ready for the Income 2020 campaign, because you will have to declare and it is very likely let him come in “, they warn from the REAF. The income statement cannot be avoided but the worker who keeps his job can agree with his company a higher withholding to try that the 2020 income statement is not payable. As explained by REAF, It is possible to agree a withholding for personal income tax greater than that corresponding to the worker due to his salary level, if the level of savings allows it. And Hacienda will be happy to enter more.

ERTEs also have a considerable impact on maternity benefits. Working mothers with children under three years of age are entitled to an income tax deduction of 1,200 euros per year for each child, whether they are employed or self-employed and provided they are registered with Social Security. But in the case of ERTE in which the employment contract is suspended, the deduction is lost during the months in which the ERTE lasts, also for the self-employed in the months in which they have closed their business. And the same happens with the deductions for large families or for dependent persons with disabilities. In the case of ERTE for a reduction in working hours, the deduction remains intact since an activity continues.

Working from home has become the new work reality for thousands of workers, which has stirred up the debate on whether the delivery of computers, mobile phones, tablets or ergonomic chairs, and the payment of money to compensate for internet expenses and light should or should not be considered as compensation in kind. The General Directorate of Taxes plans to pronounce on this before the end of the year, given the possibility that more taxes will have to be paid for work income if all the material and resources necessary for teleworking are recognized as compensation in species. The other option would be to exempt them from the alarm situation imposed by the pandemic and determine their taxation in the future framework of teleworking.

In any case, it is also time to agree with the company before the end of the year the collection of remuneration in kind, which are exempt and thus allow the amount of taxable income to be reduced. This is the case of the transport check, the restaurant check or the medical insurance paid by the company.

Housing and rent in the state of alarm

The state of alarm reset the counter in several cases with significant tax benefits. Whoever sells their habitual home does not pay taxes on the proceeds if they reinvest it in the purchase of a house to live in within a maximum period of two years, an exemption period in which the alarm status of the first wave will not be computed. So, The time elapsed from March 14 to May 30 is not counted in that two-year period.

The accountant also stops for those who, already turned 65, carry out the sale of any good, be it a house or a package of shares. The capital gain is exempt if the proceeds are reinvested in a life annuity within six months, in which the days that the spring alarm state lasted will not be counted either.

The continuous restrictions on mobility are not a reason to stop paying for the second home. As indicated in Gestha, the union of technicians of the Ministry of Finance, the Tax Agency considers that it is not the effective use of the second home, but its availability, which generates the imputation of real estate income.

The pandemic has strongly shaken the rental market and the severity of the crisis has just forced the Government to suspend evictions while the state of alarm lasts. But before reaching the extreme case of non-payment, many tenants have resorted to moratoriums and agreements with their landlords, which will be reflected in the income statement. The landlord will be taxed on the new agreed rent and will not be able to reflect income if a deferral in payment has been agreed. Of course, expenses during this moratorium, such as painting or fixing the heating or elevator, will continue to be equally deductible.

The landlord will continue to enjoy in any case a reduction of 60% of the net income obtained from the rental, as long as the use of the property is as the tenant’s habitual residence, not for economic activities or if he only rents it seasonally.

Subsidies and aid are also taxed

The Tax Agency indicates as a general rule that all subsidies or aid received by individuals are considered capital gains and therefore are subject to personal income tax. Taxes are also paid on those delivered to the self-employed. Therefore, they pay the minimum vital income, the Renove Plan for the acquisition of vehicles, subsidies from the State Housing Plan and others from the autonomous communities, or the aid from the Covid-19 Fund distributed by the autonomies, according to Gestha. From REAF, and appealing to the fact that many aids have been activated for people in vulnerable situations due to the pandemic, they defend that they should be exempted.

The tax benefit of donations has been extended this year, with effect from January 1. Thus, the deduction for what was donated has been increased by 5 percentage points, with which it will be possible to deduct 80% of the first 150 euros donated. “The rest of the donation entitles you to deduct 35% of its amount, unless you regularly make donations to that same entity, in which case this last percentage will be 40%”, they explain in REAF.

The year of the pandemic will also be the year of goodbye to the current tax benefit for individual pension plans. Ready for the final green light for the 2021 Budgets, it will be the last time to make contributions of a maximum of 8,000 euros per year to the individual pension plan and that have the tax benefit of reducing the taxpayer’s tax base. Thus, whoever has a maximum marginal rate of 45% can thus obtain a saving of 3,600 euros.

The contribution to pension plans is in fact a common formula to lower the tax bill before the end of the year, since the participant achieves a tax saving equivalent to its marginal rate. And there is more reason this year since, according to the Budgets, the contribution with the right to deduction will be reduced in 2021 from 8,000 to 2,000 euros for individual plans. There will be an option instead of contributing up to 10,000 euros with the same tax benefit to a company pension plan. They also deduct the contributions to an individual plan in favor of the spouse – as long as their income is very low – although they will go from 2,500 euros this year to 1,000 euros in 2021.

The classic tips before the year is out

Whoever bought his house before 2013, still has the deduction for housing and the recommendation is to make the most of it and amortize up to 9,040 euros, to enjoy a tax saving of 15%. Another option to try to lower the tax bill is to materialize capital losses, very abundant this year in the market, to reduce the tax on capital gains. Repaying funds with losses to pay less for the sale of a house, for example.

Job. The 2021 Budgets foresee raising the tax on earned income above 300,000 euros by 2 percentage points, so these taxpayers may be interested in advancing income before the end of the year. And without being entrepreneurs, advance sales or income and defer expenses to 2021.

Saving. Taxation on savings will also go up in 2021, as expected in the Budgets, for earnings that exceed 200,000 euros, which will be taxed at 26% from the current 23%. In the event that a transfer of assets is planned that generates large capital gains, such as the sale of a high-value property, it is therefore advisable to advance the operation to this year.