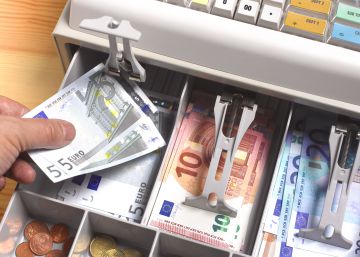 The recommendation to wash your hands after touching money is widely known to avoid coming into contact with germs that come from other people. In times of coronavirus, this tip has become one of the basic measures to prevent its spread. In fact, the Community of Madrid has banned cash payment on its buses. Likewise, to avoid the risks derived from the use of cards (when signing or entering the PIN code), the Spanish financial entities that make up the Spanish card payment system have raised from 20 to 50 euros the maximum amount for which a payment can be made contactless no password. An initiative aligned with the recommendation of the European Banking Authority (EBA).

However, it is unknown what impact these measures and consumer health precautions have had in Spain, since the Bank of Spain publishes the means of payment statistics on a quarterly basis and the data is not yet available until March, which would include two weeks of alarm status.

In any case, according to a statement from the European Central Bank, in mid-March –when the pandemic had already spread throughout Europe–, there was a weekly rebound in the value of banknotes in circulation and almost reached the historical maximum of 19,000 millions of euros. This trend was reversed in April, when the demand for cash decreased and in many countries in the community area it was below average. Both data are the consequence, in the first place, of the increase in spending in supermarkets in the days prior to confinement and the subsequent limitation of opportunities to go to businesses, as well as the drive to accumulate cash that occurs during economic crises.

Central banks and the World Health Organization itself, which originally recommended avoiding cash, have recently insisted on the security of cash. Fabio Panetta, member of the ECB Executive Committee, published a statement in which explained that the survival time of the virus in euro banknotes is much shorter (between 10 and 100 times) than in other surfaces As they are made of cotton fiber, which makes them highly porous and therefore less likely to transmit the virus.

The opposite would happen with plastic surfaces, such as cards, which would be a more favorable means of transmission. “Euro banknotes do not represent a particularly significant risk of infection compared to other surfaces with which we are in contact on a day-to-day basis,” Panetta said, referring to the results of the examinations carried out by the laboratories with which the ECB is collaborating to know the behavior of the virus on different surfaces.

The Bank for International Settlements (BIS) also released a report in early April stating that scientific studies have shown that although the virus would persist on notes and coins, it would do so to a lesser degree than on other surfaces. Likewise, he stressed that there are no confirmed cases of contagion through these means.

Other national financial organizations, such as the Bundesbank, the People’s Bank of China or the US Federal Reserve, have also taken measures during these months to promote confidence in cash. In China, for example, the central bank began sterilizing banknotes in Covid-19-affected regions in February, while the Fed announced in early March that it would quarantine banknotes arriving from Asia before they entered new in circulation.

An option that will persist

However, all these measures could hide the self-interest of central banks, which receive income from the issuance of cash, explains Verónica López, a consultant in the area of ​​Applied and Territorial Economics of International Financial Analysts (Afi).

Regardless of the contradictory messages sent in recent months, López says that in Spain there has been a “change of habit” that could last over time. The Spaniards have begun to use their cards to a greater extent after the shops, as a result of the Covid-19, have replaced the signs of minimum amounts to accept payments with plastic money for others in which this means of payment was requested in cash substitution.

PayPal. The American PayPal has launched this week in Spain the payment by QR, to further ensure the physical distance between customer and merchant and eliminate the need for POS terminals. The buyer scans the code printed by the store with his mobile phone and the charge is redirected directly to his PayPal account. The use of this system will be free for SMEs until September 13, when they will be charged a fee of 0.9% plus 0.1 euros per transaction. These types of payments are already widespread in China or some Latin American countries.