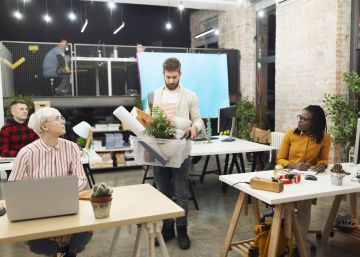 A young man who enters the labor market today will be able to have almost 7.2% less income throughout his life than a young man who entered the labor market in 2007 had. This is one of the the conclusions drawn from the latest data from the Foundation for Applied Economics Studies (fedea) on the impact of the coronavirus crisis on the labor market. There is a generation, that of young people born between 1985 and 1995, which has become the only one in the last century that will go through two major recessions in their training period and incorporation into the labor market. They call them the “generation of the double crisis” and 64% of Spaniards think that they will live worse than their parents.

But this does not have to be like this. There are measures capable of reversing that fatalistic future and bringing them to light was the main objective of the debate What future awaits Generation Y or the Double Crisis?, organized by the DEMOS Association of students of the Carlos III University together with the Friedrich Naumann Foundation for Freedom and EsadeEcPol.

The pessimism in the expectations of young Spaniards is understandable if one takes into account the shocking data that the pandemic has left: a 39% youth unemployment, high probability of temporary contracts, average age of emancipation around 32 years. However, these results are due to unsolved problems long before the pandemic, according to Adrián Vázquez, Citizens MEP in the European Parliament. “Spain has serious educational problems that are structural, and then that failure leads to an opportunity to enter the labor market. We only have to see how the different educational laws have happened in our democracy, we have eight different ones that have never been voted in a transversal way and that affects the educational quality that our young people receive ”, he commented.

Adriana Maldonado, MEP for the PSOE, agreed on the need to reform current models to offer a much more continuous education adapted to the expectations of the labor market. “There is not only the university world, there is a dual training, a Vocational Training (FP) that Spain has to work on much more,” he proposed. The Next Generation recovery funds will make it possible to reshape those productive processes that are not being able to absorb all young people in the labor market, according to the MEP, who insisted that “we are not going to have a better time at an economic and institutional level to carry out this type of reform ”.

Although it is the millennials who are suffering first-hand the economic downturns that are making it difficult for them to develop a life project similar to that of their parents, it is society as a whole which will suffer the consequences if they are not remedied. “If the number of children decreases more and more, more and more young people have a later entry into a labor market with sufficient income to develop a vital project, if the educational field has more and more problems adapting to competitive environments like digitization … then the welfare state cannot be paid for by those people, ”Maldonado acknowledged.

The remedy, according to Vázquez, is precisely to agree at the political level to find joint solutions to a common problem. “We need a consensual and transversal educational policy that takes the labor market as the main element to later develop training policies based on skills and knowledge,” he said. This is how the German model works, he explained, where the income of the post-crisis generation exceeds those of the pre-crisis at the same age, unlike the gap that exists in southern European countries such as Spain, Italy and Portugal.

The scar left by the double economic crisis of the last decades is inevitable. But, according to the experts, whether it is cured or not will depend a lot on the capacity of the different institutions to draw up agreements that make the country not only sustainable for young people, but also sustainable as a whole.

more than 4,500 million euros at risk