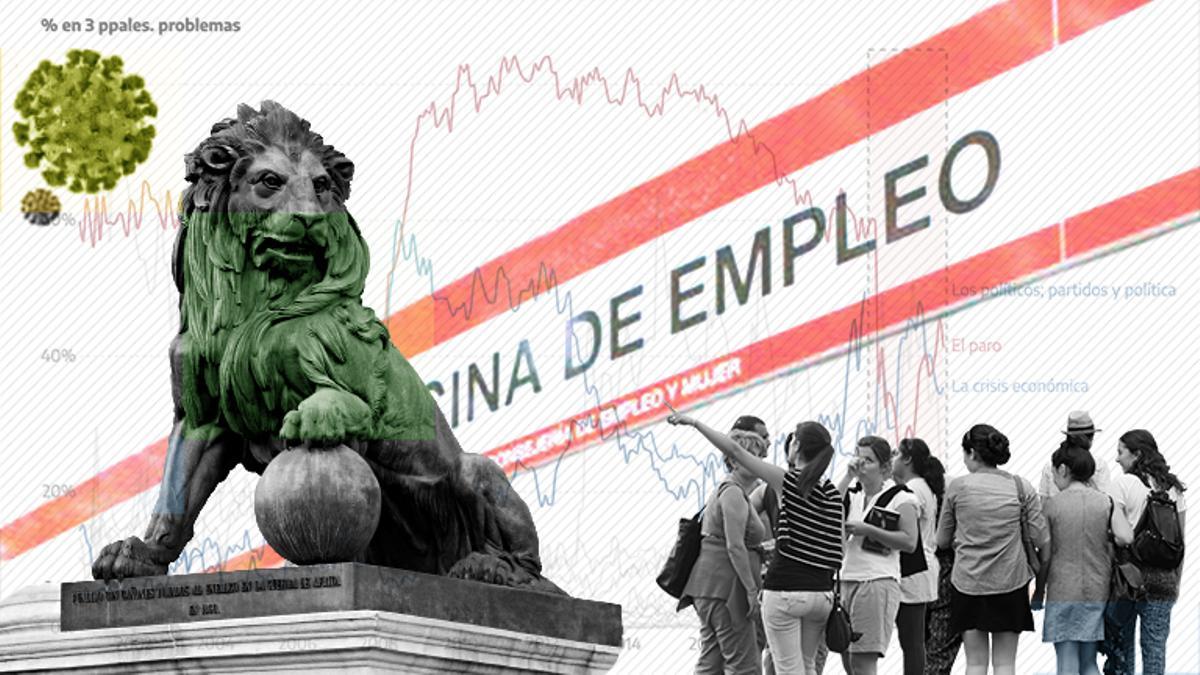 Unemployment it has been in the last 20 years the main concern of the Spanish. The line shows the percentage of the population surveyed by the CIS that considers unemployment as 1 of the 3 main national problems.

The data comes from the barometers of the CIS, which every month asks what are the three main problems in Spain. Through them, we take a historical tour of the concerns of Spaniards in the last 20 years 👇

Even the 11-M attacks they raised it to 70%. Over the years, this perception disappeared.

The problem of the drugs
In the early 2000s it was real: Cocaine and heroin use was on the rise, and there were 302 overdose deaths that year alone. At the same time, the increase in crime drove the citizen insecurity up to 30%.

In 2006, the perception of immigration as a problem reached its all-time high, almost 60%, after the 'crisis of the cayucos' of that summer.

The
immigration as a problem it is a reflection of the irregular arrivals of people, as well as their presence in the media.

In the years of the housing bubble, the uncontrolled rise in prices skyrocketed the House as one of the main problems. In 2007 it peaked at 37%.

When in 2008 bubble burst, the economic crisis replaced that problem.

As of 2008, The financial crisis monopolized the concerns of the Spanish: unemployment hit record numbers and led major issues for more than a decade.

The economic crisis ranked second, far behind the rest ... until 2013.

The publication of 'the Bárcenas papers' catapulted the corruption and fraud as the country's second problem, even above the crisis.

The peaks of the last decade correspond to the outbreak of the various cases: Punic Operation, Gürtel Case or the Andalusian ERE.

Corruption evolves closely linked to the perception of politicians as a problem. In the years when the different plots overlapped, "politicians in general, political parties, and politics" became the country's third and fourth main problems.

This vision continued to increase until it touched 50%. To cushion the bad data, the institute led by Tezanos chopped up the answers in three different ways: "political problems in general", "the actions of politicians" and "what political parties do".

One of the social concerns that has grown is that of gender violence, especially since 2018, when the historic 8M feminist strike took place. Although it has always been below 10% of the responses.

The pensions
They were never a problem until 2018. That year, as a result of the massive mobilizations of pensioners and the renewal of the Toledo Pact, the problem of the pension system climbed to 15%. It is currently on the rise again.

Something similar happens to education: It has never been one of the great problems but it experienced a rebound from 2012 and the demands of the 'green tides' in defense of public and free education.

March 2020. The date all of our priorities changed.
The pandemic became the first problem.

Other concerns subsided as fears of the lack of sufficient resources to cope with the epidemic mounted. At the peak of the third wave, it exceeded 50%.

The pandemic triggered concern about the sanitary system in Spain.

The health problem, which had been increasing since 2012, with the mobilizations of the 'white tides', was placed above 15% and has not stopped growing since then. It already stands at 21%.

The pandemic has made health concern third place for the first time. Along with it, unemployment and the economic crisis have been immovable for more than a decade as the main problems in Spain.

And although it seems that we have overcome the worst of the epidemic, the fear of the coronavirus and the lack of resources to face it remains in fourth place.