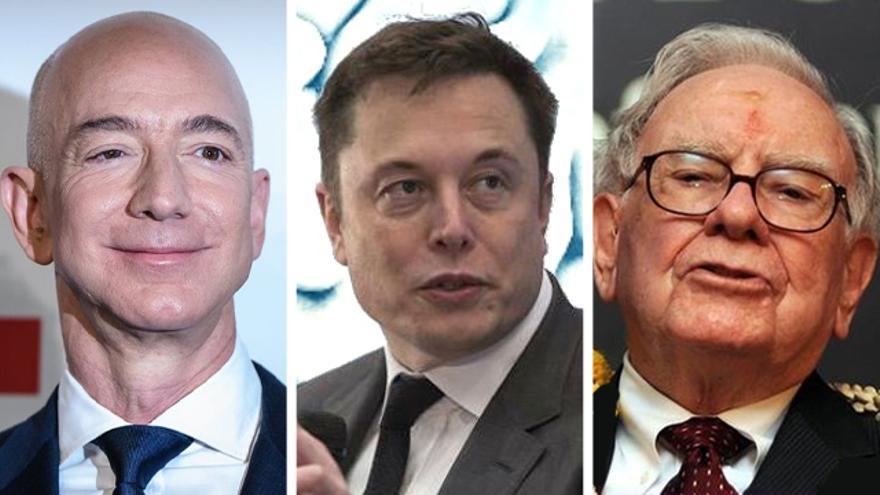 Billionaires don't pay the taxes they should in America. A research published in Propublica reveals that top billionaires pay little in income taxes compared to their enormous wealth, sometimes even making no income into the public coffers. In this way, Jeff Bezos, owner of Amazon, now the richest man in the world, did not pay a penny in federal income taxes in 2007 and 2011. Elon Musk, founder of Tesla, the second richest person in the world , also did not pay federal income taxes in 2018. Michael Bloomberg, founder of the financial information company with his last name, managed to leave his income tax contribution to zero in recent years, while investor George Soros did not pay federal taxes on the income for three years in a row and the investor Warren Buffet only paid a total rate of 0.10% when his equity is 24,300 million.

The publication has had access to data from the Internal Revenue Service of the United States with the tax returns of thousands of people, among which are the richest in the country, during the last 15 years.

To get an idea, the 25 richest people saw their wealth increase by a total of $ 401 billion, according to the Forbes list, between 2014 and 2018. But according to US Treasury data, they paid $ 13.6 billion in federal taxes on the property. income in those five years, which equates to a real tax rate of only 3.4%. To have a clear comparison: the average American household earned about $ 70,000 annually and paid 14% in federal taxes. The highest tax rate, 37%, took effect this year, for couples with incomes greater than $ 628,300.

Propublica's research debunks several myths about the rich and taxes: not everyone pays what they should and is fair, nor are the richest Americans the ones who pay the most, nor does the wealthy benefit the rest of society because they distributes that wealth through tax. IRS records show that the wealthiest can pay - perfectly legally - income taxes that are only a small fraction of the hundreds of millions, if not billions, of their fortunes.

Although he has publicly defended more taxes on the rich, the reality is that among the 25 billionaires, none evaded as many taxes as this investor. According to Forbes, his assets increased by $ 24.3 billion between 2014 and 2018, but in those years he only declared income in the Treasury for the rent of $ 23.7 million. This assumes a real tax rate of 0.1%, that is, less than 10 cents for every $ 100 you have entered.

The wealth of the founder and owner of Amazon increased by $ 127 billion between 2006 and 2018, according to Forbes, but declared a total of $ 6.5 billion in revenue. The $ 1.4 billion he paid in federal personal taxes equates to a 1.1% real tax rate on the increase in his fortune.

In 2011, his personal wealth stood at $ 18 billion. In his tax return he indicated that he had lost money: his income for that year was offset by losses from investments. In accordance with the law in the US, as he earned little, he applied for and received a $ 4,000 tax credit for his children.

In 2007, Bezos did not pay a penny in federal income taxes. Amazon's stock value doubled and its fortune rose to $ 3.8 billion, according to Forbes. Bezos jointly filed his tax return with his then-wife, MacKenzie Scott, who reported $ 46 million in income from interest payments and dividends on foreign investments. He offset every penny he earned against secondary investment losses and various deductions such as interest expense on debt and "other expenses."

In 2018, he reported income of $ 1.9 billion, but the founder of the financial information empire managed to lower his tax bill thanks to deductions approved by the Trump Administration, so that he only paid $ 70.7 million in tax on income, which is equivalent to paying a tax rate of 3.7%. It was not his best year, between 2014 and 201, Bloomberg contributed to the US Treasury with a real tax rate of 1.30%. In those years, his fortune grew by $ 22.5 billion, according to Forbes.

In its research, the publication ProPublica recalls how in the last year and a half hundreds of thousands of Americans died from COVID-19 and millions were left without work. One of the darkest periods in American history turned out to be one of the most lucrative for billionaires. These added $ 1.2 trillion to their fortunes from January 2020 to the end of April this year, according to Forbes. In later publications, the rest of the mega-people who do not pay income taxes in the United States will appear.