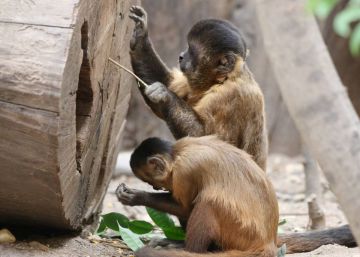 A priori it seems that intelligence was something easy to define because everyone finds a definition, but it is really difficult to find a suitable and adjusted one and, above all, to take into account all the variables. For example, the definition of the SAR says it is the ability to understand or understand, to solve problems; that is, he is talking about skills and abilities, but he is not saying that in order to develop those skills, experience is needed. So you can compare if when you do something you do it well you need to start from an experience, a memory and a learning. And that definition of the SAR does not take these factors into account.

If we think of the whole range of living beings, how do you ask the question, we consider that a living being is intelligent, first, if it is capable of using tools to modify its environment. That looks great on chimpanzees who use sticks to put them in the anthill and eat termites, although not only chimpanzees use tools. Second, if he uses language to communicate with other beings of the same species, such as humans; but it has been seen that this communication capacity also occurs in dolphins and other animal species. In addition, it would be necessary to be aware of oneself. Why? Because you have to ask yourself if what you are going to do is useful for what you want to achieve. That is, one has to be able to reflect and dig through his experience.

Now we have the theory of multiple intelligences, of which I am a supporter because, for example, a person can be a total failure in social matters but can be an excellent musician. And thanks also to pathologies such as autism we ask ourselves more and more questions about intelligence. Many people of the autistic spectrum are not considered with an intellectual capacity or with a high intelligence coefficient, but there are many who are very good in calculus, geometry or other mathematical abilities and also in art. They have certain facets in which they excel in terms of their abilities. But intelligence is considered as a set of everything. I believe that intelligence must be defined from another question: what is it for?

The fundamental problem when defining intelligence is that we are considering it as an entity, something with its own entity

Rocío Leal Campanario She is a doctor in neuroscience, professor and researcher at the Pablo de Olavide University.

We respond It is a weekly scientific office, sponsored by the Dr. Antoni Esteve Foundation, which answers readers’ questions about science and technology. They are scientists and technologists, partners of AMIT (Association of Women Researchers and Technologists), the ones that answer those questions. Send your questions to us@gmail.com or through Twitter #nosotrasrespondemos.

The mobile phone turns 75 years old, turned into an extension of our body